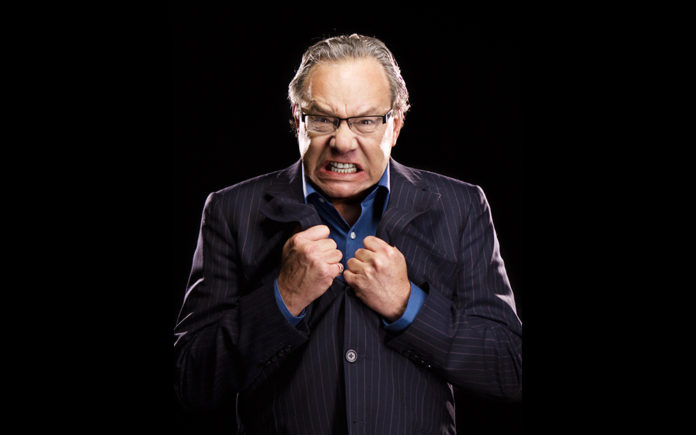 What should you not do with a comedian known for his angry rants? Well, a good start is don’t mix up the time of the interview and call an hour late. I woke up with a missed call from New York and a message from Lewis Black saying he thought our interview was at 7:35 am. In a panic, I called him back. He didn’t seem thrilled about the mix-up, but I told him I just couldn’t believe someone thought it was ok to make me talk on the phone at 7:35 in the damn morning. He laughed at this, agreed with me, and no rants were directed my way. If you want your own chance to hear Lewis Black’s sometimes angry, always hilarious musings, catch him at Fantasy Springs on Friday, May 11.

CVW: What is it about humor and anger that come together for you?

LB: “It’s just that I’m funniest when I’m angry, irritated, or upset. Part of it is because of the persona I’ve created. A lot of people have that but keep it inside their head. It’s something I fell into, I was lucky. I was in the right place at the right time and eventually it caught on. I thought it would catch on faster actually, because Sam Kinison was really yelling. I’d been on the road doing stuff and when he hit, I thought, “They’d better find me.” I realized that it takes a while to discover what is the key to what makes you uniquely funny. We all have it. Humor is a muscle you bring with you and exercise. Once you teach kids that weapon, you’re fucked.”

CVW: You played Anger in Inside Out – did this bring you a new wave of younger fans?

LB: “I wish. You can’t have a 9-year old rolling into the show. Parents will bring stuff for their kid to sign. I’ve got one or two pieces kids have done where they’ve drawn Anger, that’s cute.”

CVW: I’ve read a list of your comedic influences and I was wondering if you add to that and draw new influences or if that’s set in stone at this point.

LB: “It’s a lockbox. What irritates me is there are people I didn’t give proper credit to and I’ve never mentioned. Paul Krassner is one. He had a big influence on me with his magazine, The Realist. Vonnegut, Joseph Heller, the Marx Brothers – all people I’ve never credited as influences. Eventually I’ll sit down and write the total list.”

CVW: Do people come up to you and try to do their comedy bits to you?

LB: “Sometimes people tell me jokes and sometimes they’re actually pretty good. Basically they always say someone in family is like you – my uncle, my father, my sister. A lot of times people will come up at a signing and ask me to tell them to go fuck themselves. Or sign something, “Fuck you John.” I never thought I would be telling someone to go fuck themselves. (Chuckles.)”

CVW: How do you manage to make both sides laugh with your political humor?

LB: “Now that there are three sides it’s harder. The new side – the side of whatever this is they came up with. Certainly there’s a sense that these people in part have been screwed. It’s kinda like Republicans screwed you and Democrats screwed you and then you go pick a pony. So this is the first time in a while I’ve had blowback. Some people ask why I never talked about Obama or Hillary. And I wonder, “Where were you over the last 15 years I was performing?” The gig is whoever gets elected, I get to yell at. On occasion I get blowback from Trump fans.”

CVW: Do you ever get tired of talking about politics?

LB: “After this election I haven’t wanted to talk about politics. They ran two candidates no one liked. Both sides decided to nominate someone nobody really wanted and that kinda did me in. Some of the stuff Trump said, calling Mexicans rapists. It wasn’t funny. A wholesale spewing of nonsense was allowed and the media gave him a platform to do it. They ran a guy who didn’t want to be president against someone who didn’t know how to get elected. She didn’t go to the states, she didn’t pick Bernie. Nobody stood up, there were no adults in the room. The Democrats said he was a bad man and that would help them win, especially when the party that nominated him didn’t seem to think he would win. Minimally, you elect a role model as president. What planet are you on, grabbing pussy and calling Mexicans rapists? Fuck you. So you can see what a happy person I am.”

See Lewis Black and his opener, Jeff Stilson, on Friday, May 11 at Fantasy Springs Resort Casino. Purchase your tickets here: http://www.fantasyspringsresort.com/prod/entertain/entertain.php#lewis_black to see him in the Coachella Valley stop in his “The Joke’s On Us” tour.