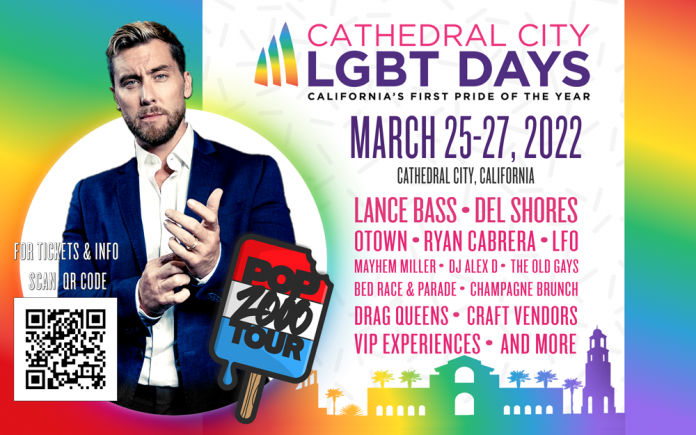 Holding the notable distinction of being California’s first Pride event of the year, the 6th annual

Cathedral City LGBT Days will take place from March 25th to the 27th. This weekend-long event will bring together numerous LGBT celebrities, artists, media, and community leaders around the Coachella Valley for a can’t-miss celebration encompassing love and quality.

“30 percent of all residents in Cathedral City identify as part of the LGBTQ community. The fact that a large segment of the city belongs in that category, as well as our neighboring city Palm Springs, only highlights the importance of showing pride. Rancho Mirage also has the largest percentage of gay married couples living in the nation on a per capita basis,” stated LGBT Days Co-Founder Chris Parman.

Parman holds many different positions within Cathedral City, as he is also the City Events Manager and LGBTQ Liaison to City Administration. The establishment of LGBT Days was a joint effort with Richard Altman, who owns the CCBC Resort and the Runway Bar & Restaurant in Cathedral City. The first event was held in March of 2015 and has been growing ever since. 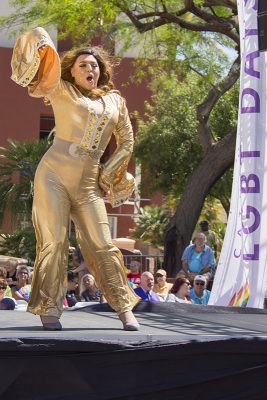 “We probably had hundreds of people attend during the first LGBT Days, and in the last celebration we held in 2019, I would estimate that around five to seven thousand attended. The growth of this event has been significant. This is truly a time to recognize the strength in our diversity, appreciate our similarities, and stand united for the equal rights of all Americans,” said Parman.

Historically, Cathedral City was the go-to destination for the LGBT community during the 1970s and 1980s, and it was not until the late 80s and early 90s that the progression into Palm Springs became a reality. The LGBT Days celebration is a way for the City to reclaim that history as being the first in the desert to have gay bars, resorts, raise the rainbow flag at City Hall, and have a rainbow crossing.

A painting party will also take place on March 18 at 9 a.m. where the rainbow crossing will be repainted just in time for the LGBT Days event.

There will be a variety of entertainment and activities with community engagement all three days of the celebration. Activities on Friday night, presented by KGAY, feature the official Pride flag raising and lighting of City Hall, followed by a T dance in Town Square Park and a comedy performance by actor/playwright/activist Del Shores at the CV Repertory Theatre. The fun continues with a bar crawl presented by the Cathedral City Gay Business Association (CCBGA) and participating local bars including Roost Bar Lounge, One Eleven Bar, Barracks Bar, Trunks, AMP Sports Lounge and CCBC Resort Hotel/Runway Bar.

Saturday’s festivities kick off with Cathedral City LGBT Days Saturday Heat. Doors open at 4 p.m. The Afternoon T Dance on the Lawn will be presented by partners The Abbey and Channel Q with their dancers, and hosted by Andrew Christian Trophy Boy Nic Masc with DJ Jeffree & The Abbey Gogo’s. Lawn games, early drink specials, prize giveaways, and local queens will also be at the Afternoon T Dance. 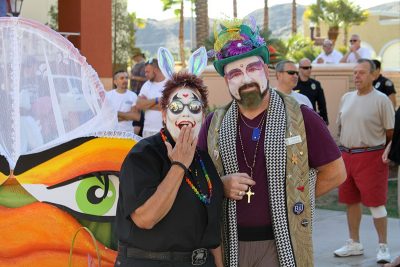 Main Stage sets will be co-hosted Mayhem Miller & DJ Alex D with a special appearance by The Old Gays and the Mayoral Award Ceremony. At 7:30 p.m., a star-studded musical spectacular begins with a  headline performance by Pop2000 Tour hosted by Lance Bass of N’SYNC, featuring multi-platinum recording artists O-Town, Ryan Cabrera, and LFO.

Besides the star-studded concert experiences, sponsor giveaways, multiple bars, artisan craft vendors, and gourmet food trucks will round out a full evening of entertainment in the Amphitheater for all attendees. 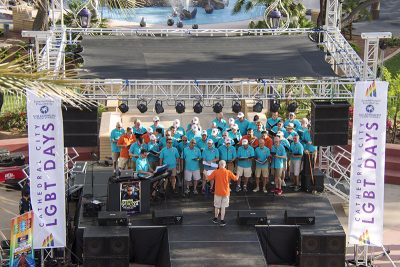 City Hall, where thousands of attendees line up to cheer on teams running festively decorated beds down Avenue Lalo Guerrero, competing for prizes.

“The Bed Race is absolutely, by far, my favorite event at LGBT Days. This sets us apart from other pride festivals as a fun addition to our celebration. We have a very strong competition between the Cathedral City firefighters, police officers, and the Friends of the Cathedral City Administration who are vying for the fastest time. It’s been an exciting and healthy competition between the various departments,” shared Parman.

Starting at 9 a.m., and continuing after the Bed Race, Town Square Park will host a luxurious Champagne Brunch party presented by KGAY with a DJ, mimosas, and gourmet food trucks on hand for all attendees to enjoy. 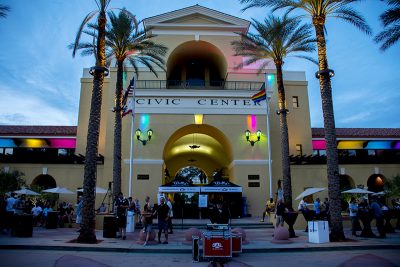 LGBT Days is produced by Soundskilz Productions, a national entertainment production agency with offices in Temecula, CA; San Antonio, TX; Park City, UT; and Atlanta, GA. It is the first year that Soundskilz is involved in the event, bringing amazing talent to Cathedral City.

“Coming out of the COVID pandemic, it has been more challenging trying to grow the event in its sixth year, but we have a grand vision and put a lot of work into events that will bring the Amphitheater to life. We’re bringing bigger performing talent to spread our wings a bit and expand LGBT Days. We’re also bringing in partners such as The Abbey from West Hollywood, which is the most famous gay bar in the world,” stated LGBT Days Producer Ryan Heil.

For more information about LGBT Days and to purchase tickets, visit https://www.cathedralcitylgbtdays.com.