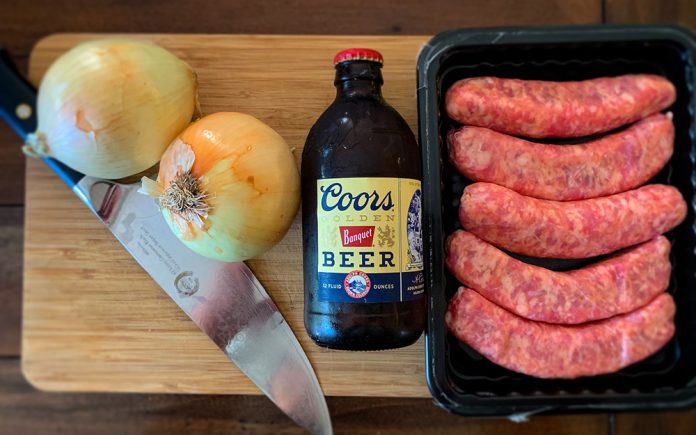 If you ever heard as a kid that hotdogs were made of lips and assholes, there’s some truth to that old proverb. Hotdogs are frankfurters, a type of sausage, and few things are more American than having a ‘dog and a beer at the ballpark. The pair go together so well that steaming or simmering them in beer has become a very common way to cook frankfurters and bratwurst. Of course, we wouldn’t have this midwestern staple today if not for starving Mesopotamian warriors who needed a way to eat their dead horses.

When the need for something becomes imperative, we are forced to find ways of getting or achieving it; that’s the essence of survival. The philosopher Plato summarized that facet of human nature with the time-honored proverb, “necessity is the mother of invention”. Scarcity of food gave early-man reason to be as efficient as possible when it came to what they ate. Anything that could be hunted or gathered would be eaten (a shoutout to all the ancient people who died learning what you shouldn’t hunt or gather, teaching us to leave saber toothed tigers and oleander alone), and every part of the plant or animal that could be digested was consumed.

Early Mesopotamians were total pioneers when it came to food science. Warring tribes of the Mesopotamian region, Sumerians were some of the first people to figure out that spices masked the taste of, how shall we say, lesser meats. For instance, the entrails of your horse that died on the battlefield earlier that day. Grubhub was still about 22,000 years in the future, so if you were a tribal warrior whose horse had succumbed to injury, your dinner options just increased by one. Food became scarce in times of war, so the Sumerian people needed to find ways to preserve the food they had, eat every part of the animal that was edible, and improve its potentially awful taste. It’s through these necessities that they began pulverizing, spicing, and stuffing the less desirable bits of animal into its own entrails as a way to preserve food for future use. Sumerians were the first to create sausages, but necessity forced many other cultures to invent their own versions of the same idea.

Sausage was a means of survival for many cultures, where regional spices influenced the flavor, and harsh climates dictated the preparation. Circa 1000BC, the Turks had innovated a dry, spicy sausage called sujuk. 500 years later, the Chinese would invent the sweet and spicy lap cheong. In 14th century North Africa, the hot temperatures gave birth to a very dry type of mutton sausage called merguez. By 1376, Italy had a massive looking sausage made of pork and lard called mortadella, and the Germans had been making a coarsely cut, pork sausage called bratwurst. Harsh German winters meant not a scrap of food could be wasted, so every bit of loose flesh went into bratwurst. If the lips, ears, snout and knees of a pig made their way into the meat grinder, spices like nutmeg, coriander, lemon zest and ginger turned them delicious.

While sausages like mortadella and saucisson can be found in specialty delis around the country, it’s the German sausages that really took root and gained popularity in the united states. As German immigrants moved further inland, leaving the crowded and confined cities of New York and Pennsylvania for the wide-open lands of Wisconsin and Michigan, they brought their culture with them, specifically recipes for Frankfurt and bratwurst sausages. The frankfurter sausage was a thin, finely ground pork sausage that was smoked as a way of preserving. Bratwurst on the other hand, was usually a fatter sausage, made with roughly chopped, chunks of pork as opposed to the finely ground paste of a frankfurter. Because of the delicate casing used in both (usually lamb intestines), both types of sausage were parboiled in water to prevent the casing from bursting.

This is the way that German’s cooked their sausages for generations, but in true American spirit, water could no longer be enough once those recipes got comfortable stateside.

The 1920’s was a decade of alcohol prohibition, it was also the decade that the talented butchers of Sheboygan County, Wisconsin began making fresh bratwurst that was not meant for long storage. The IPA of the sausage world, these tender, flavorful foods were meant to be consumed fresh, their high fat content and freshly ground herbs creating a short shelf life. Parboiling was no longer the desired method of cooking; these fresh brats were amazing grilled. Some bratwurst makers created such thick sausages that they still needed to be parboiled before grilling, to ensure they were cooked thoroughly. In 1933, prohibition ended, and American’s once again had beer in their possession. What few breweries still around after prohibition ended all made German style pilsner, which was the perfect beverage to enjoy grilled bratwurst with. It’s unknown who was the first to simmer their brats in pilsner before grilling, but the technique added new layers of savory flavor to the sausage. Other’s chose to grill their brats first before submerging them in a bath of simmering beer, both techniques gaining fans around the country.

The 1950’s saw the first brats being sold at a baseball game in Milwaukee County Stadium, spreading the regional favorite to a national audience. While Californians will never give up their tacos and tri-tip steaks, bratwurst have found a home in many west coast backyard barbeques. Especially when they’re cooked in beer.