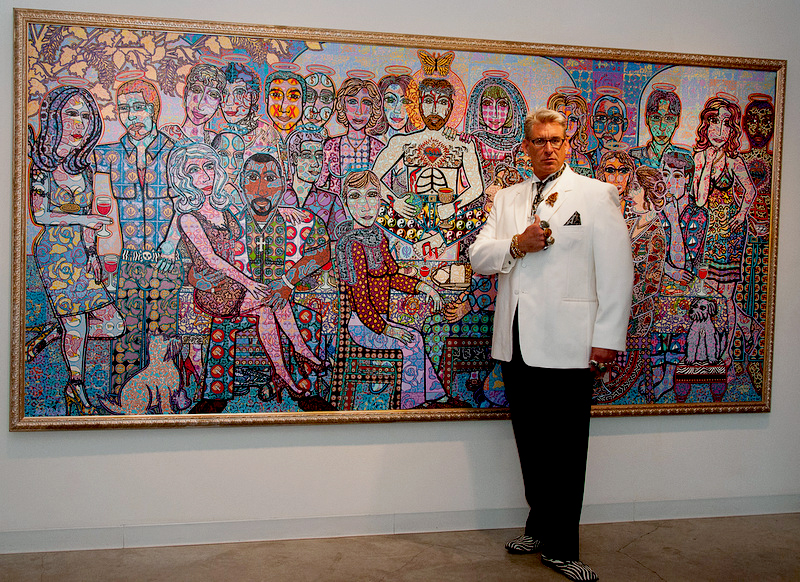 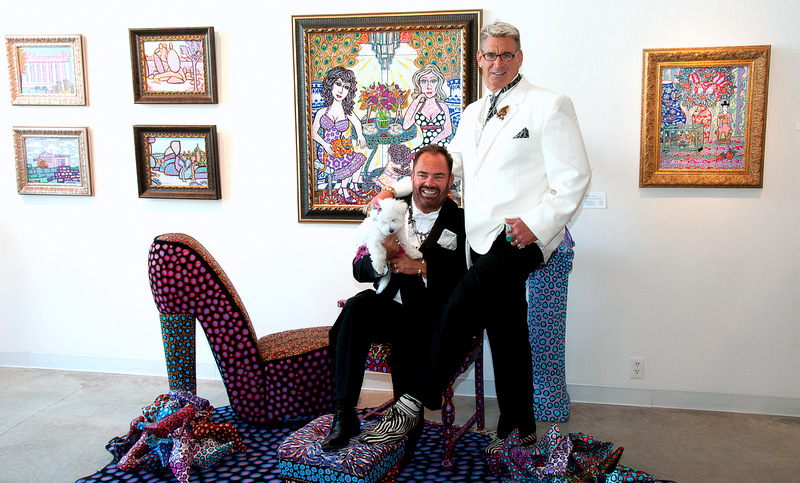 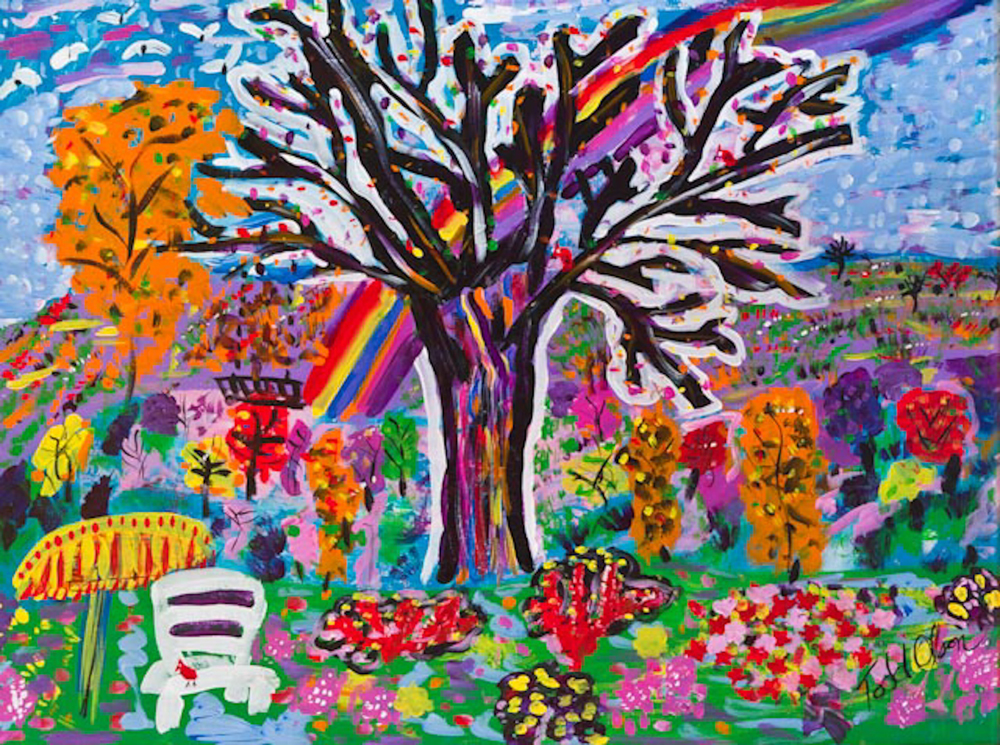 Lon Michels has lived his life dedicated to creating art. With his new boutique gallery in Palm Springs, he is poised to share his inspiring art with the Coachella Valley, and along with his partner Todd Olson, give back to charities dear to their hearts.

His connection with art started when Michels was a child, as his mother, an artist herself, would lay flowers on the floor and have him paint them. Born in Wisconsin, Michels grew up in the quaint picturesque mid-western town of Marquette, with a population of 150.

Leaving his adolescence and Wisconsin behind, Michels set his sights on one of the most progressive cities for art in the world, New York City. Upon arrival and with $300 in his pocket, Michels got his first glimpse of a taxi cab and his first glimpse of the sometimes harsh reality of city life as he generously divulged his available finances to his cabbie, and the cabbie suspiciously charged Michels the full amount. It was a precious yet costly lesson, but Michels rebounded utilizing the experience as part of his metropolitan education.

In New York he started modeling for such popular designers as Calvin Klein, but his big break in the art world came when he became the assistant of legendary artist, Louis Nevelson. She introduced Michels into the pinnacle of art society leaving an indelible mark on the young artist, encouraging him in his craft and became a source of inspiration.

Michels continued his art career and has been deemed by many in the art world as the “Picasso of our lifetime”. In viewing his art it is easy to see why he has commanded such an impressive compliment. He creates his art from live models, and never sketches an outline. The needle sized paintbrush that he uses for each painstaking stroke lends to his arts beauty and meaning. Michels has painted over 1800 pieces over his 45 year career, quite an outstanding accomplishment considering it takes him sometimes years to complete one painting.

One of his paintings hanging in his Palm Springs French Salon inspired gallery is the titled painting “Freedom” which has significant meaning to the artist. He started painting the 10x12ft piece in 2003 while in Key West. As he was working on the artwork one day, his vision began to fail. He had experienced some faults in his vision prior to it, but set it aside from worry, deeming it as just possible fatigue of the eyes. But it turned out to be more sinister than that, Michels was about to become blind. As “Freedom” was taking form, his vision went to black.

The vibrant colors that once danced upon his canvas were no longer a visual he could see. He was devastated. He urgently sought help from doctors who tried in earnest to help the shattered artist, but who said that he would most likely never see again for his optic nerves had deteriorated, caused by an infection affecting 1in 100,000 people. It was an agonizing time for Michels, the simplest of daily tasks became heroic efforts. He would do 2,000 sit ups each night to focus his mind and to keep his sanity. He looks back with humor, regarding the exercise as his saving grace, “At least I had amazing abs,” Michels jests. Over time, and with the encouragement of his loved ones, he began to paint again, in the darkness. He could see in his mind’s eye, and transferred his visions of his imagination onto canvas…it was miraculous. 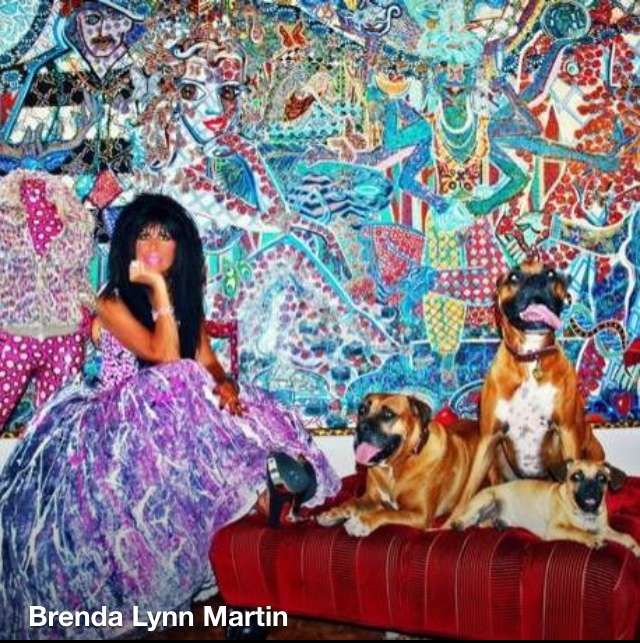 The people who were around him at the time stood in stunned amazement at what the blind artist had achieved. “It saved my life,” Michels says. After a series of experimental surgeries, Michels started to see again, slowly the world came back into view. The ordeal had taken two years. “It was the most terrifying but the most beautiful experience,” said Michels.

He sprung back into life and completed his “Freedom” painting. He had a new outlook on life, realizing the key components to joy and never taking one precious day for granted.

Michels’ life only got better after his ordeal. He met and fell in love with his partner Todd Olson and eventually moved to sunny Palm Springs after visiting the area for many years. Olson is an accomplished artist in his own right, learning techniques from the master himself. Michels is proud of Olson, claiming that his apt student “Paints without fear”. Olson is ecstatic of his work, stating that if his art can bring a smile to someone’s face, he satisfied. He has had many shows in different cities, including his home turf of the mid-west. His art along with Michels’ is displayed in their Palm Springs gallery available for purchase.

The duo is very grateful for their success, and proud to give back to the world through different charities. Olson is involved with working with charities that help prevent teen suicide, focusing especially on LGBT teens, which have the highest rate of suicide in the nation.

They are happy to be a part of the Fall Garden Party which will be held at Copley’s on Palm Canyon Saturday, October 5th 2013 from 2-4pm. The party is a benefit for the Desert Blind & Handicapped Association. The event will have a celebrity fashion show, with the models donning Michels’ hand painted gowns and furs which incorporate Swarovski crystals. Twenty percent of the proceeds from the art will be donated to the Desert Blind & Handicapped Association, which have a goal of purchasing 20 vehicles to transport their clients. 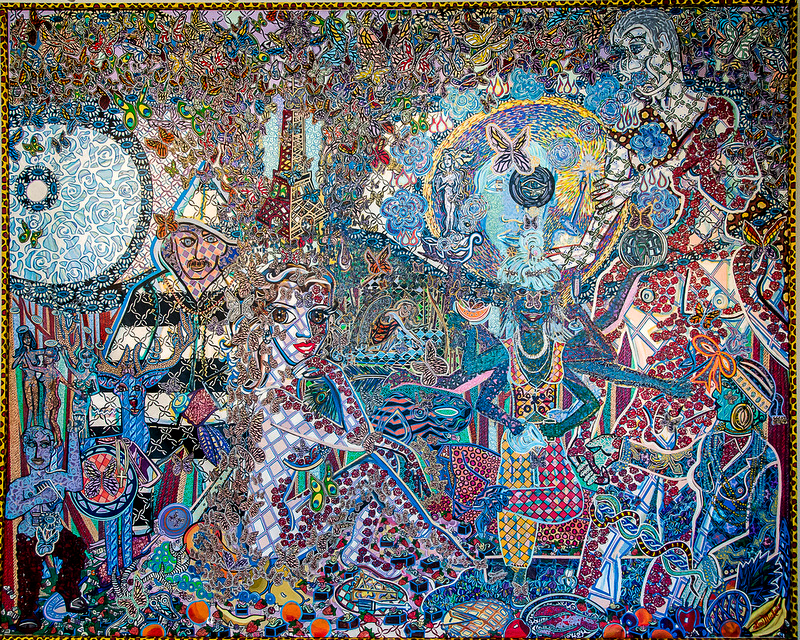 Michels and Olson will also be having their grand opening of their Lon Michels Gallery on Saturday, October 26th, 2013 from 5-9pm. The gallery opened in August and is intimate in nature with a collection of large scale paintings as well as Michels Wearable Art. Olson’s fantastic animal skulls hang high, adorned with Swarovski crystals and other gems, it is a venue brimming with visual stimuli. The grand opening will include refreshments and entertainment, guest artist Alexis Hunter and a showing of “The Last Supper”, a film produced by Olson about Michel. The film will be viewed outside against the backdrop of the beautiful San Jacinto Mountain. Ten percent of all proceeds from art sold at the grand opening and all throughout the month of October will benefit the Desert Blind & Handicapped Association, Aids Assistance and the Palm Springs Animal Shelter.

Michels and Olson are pleased to be part of the Palm Springs art community, and look forward to enhancing the local art scene and being able to impact a variety of charities. The benevolent artists want their gallery to be known as “The most intimate gallery with the largest paintings”!