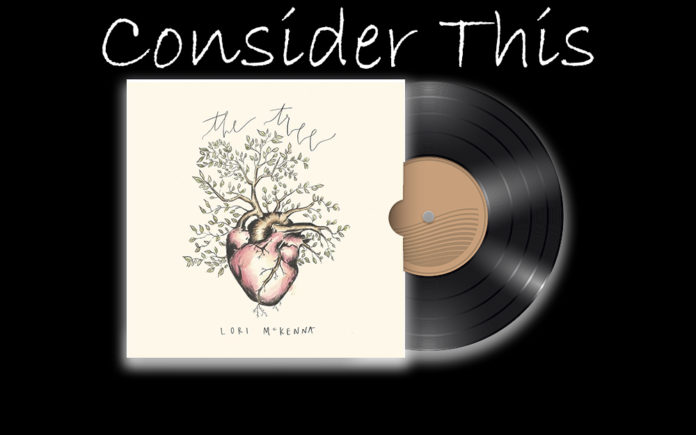 There are very few sure things in the record business, but one thing you can always count on is great music from Lori McKenna. The Massachusetts native is less known as a performer, and more recognizable to Country fans as the songwriter behind huge hits from Faith Hill, Tim McGraw, Allison Krauss, Reba, Little Big Town and Keith Urban. She has just released her 11th album, The Tree.

Born in 1968, and raised in Stoughton, Massachusetts, she is the youngest of six kids. Her mom, Lorraine, (for whom she was named), passed away when Lori was just seven. A year later she met her future husband, Gene, while they both attended third grade. They married after graduating high school in the mid ‘80s.

She had always nurtured musical ambitions, quietly singing, playing guitar and writing her own songs, from age 13. But it wasn’t until her late ‘20s, after receiving encouragement from Gene and the kids that she began to actively pursue a career in music. By day, she took care of her family. Once everyone was asleep, and the house was quiet, she would write her songs at the kitchen table. Finally, she screwed up her courage and began performing.

She found a home in Boston’s thriving coffee house scene. She paid her dues at Open Mic nights, and pretty soon, her talent was recognized. Following the same road paved by antecedents like Aimee Mann, Tracy Chapman, Jonatha Brooke and Patty Griffin, she cultivated a local, rather loyal fan base.

By 1998 she had recorded her debut, Paper Wings And Halo, it was released two years later through the small Signature Label. A year later, Pieces Of Me arrived and 2004 saw the release of the intimate Kitchen Tapes album as well as her breakthrough, Bittertown. Even though her music was closer to Folk and Rock, trace elements of Country were sprinkled in to the mix. Wisely, Lori’s publisher sent her music out to several Nashville stars and the gambit paid off. Country superstar, Faith Hill recorded three of her songs (including the title track) for her 2005 album, Fireflies. It shot to #1 on the Country charts and eventually went multi-platinum.

Faith and her husband, Tim McGraw, took Lori under their collective wing and she was rapidly becoming a household name. She signed a deal with their behemoth record label, Warner Brothers, began opening for them on tour and even appeared on “Oprah” with the couple.

Her major label debut, Unglamorous, was produced by Tim McGraw and released in 2007. Sleek and more polished than earlier efforts, it reached #19 on the Country charts, and #119 on the Billboard Top 200. Strangely, Warner Brothers expected even bigger things, so she and the label parted company.

In the ensuing years she has returned to smaller labels, honing the warm and deeply personal style that has become her signature. Between 2011 and 2014 she released four records, Lorraine, Heart-Shaped Bullet, Massachusetts and Numbered Doors. Balancing marriage and (five) kids, Lori Has also carved out time to pursue her musical dreams. Every month she spends two days working in Nashville. There, she concentrates on songwriting and collaborates with other writers.

In 2016, she enlisted in-demand producer Dave Cobb and created another winner, The Bird & The Rifle. A Georgia native, Dave is a musician first and made his bones in L.A. before setting up his own studio in Nashville. He is practically a fifth member of Rival Sons, the thrilling Rock N’ Roll Band from Long Beach, California who are leading the charge to resurrect the nearly moribund corpse of Rock N’ Roll. He has handled production chores on all of their records, (including their highly anticipated sixth release, due in September).

Currently the most in-demand producer in the business, the Grammy winner has also been behind the boards to guide seminal albums from Jason Isbell, Sturgill Simpson, Chris Stapleton, Ashley Monroe, Zac Brown and John Prine. The Bird & The Rifle featured Lori’s take on her “Humble And Kind” song (which Tim McGraw took to the top of the charts in 2015). It garnered a Grammy nomination for Best Americana Album. Now she and Dave have partnered up again for her newest effort, The Tree.

The record opens tentatively with “A Mother Never Rests.”  Strummy acoustic guitar and lithe percussion intersect over a tumbling beat.  A sturdy evocation to motherhood, it begins with this simple observation; “Here’s what I know, even when she’s sleeping, she’s still dreaming of you.” She quietly makes the case that no one ever knows you as completely, or loves you as thoroughly as your mother. (Sadly, sometimes that never really resonates until your mother is gone).

Collaborating with other writers is a relatively new method for Lori, so it’s no surprise that the most intimate songs on The Tree are solo compositions. “People Get Old” blends sun-dappled acoustic arpeggios with rugged electric riffs. Poignant lyrics chart the painful role reversals that inevitably occur between a parent and a child; “Daddy keeps busy in the afternoons playing cards by himself, and he shouldn’t be shoveling that first snow but you know he won’t take the help, full of pride and love he don’t say too much, but hell, he never did/You still think he’s 45 and he still thinks you’re a kid, one day you find yourself saying the things they did.”

Pensive acoustic chords share some musical DNA with Fleetwood Mac’s “Landslide” on “You Won’t Even Know I’m Gone.” The lyrics offer a snapshot of Lori’s mundane, albeit meticulous preparations for her monthly Nashville sojourns; “I will wash and fold your clothes, sort them carefully into rows, spray soap from the bathroom tiles, cut the threads from the kitchen towels/Wash the dishes in the sink, I could do it all in my sleep.” As domestic duties and artistic ambitions collide, she briefly equivocates; “And may God forgive the things I do that puts one mile between me and you…” before realizing that she must follow her path, with a nod toward Shakespeare; “…To Thine own self be true.”

Meanwhile, “The Fixer” offers a devastating portrait of a husband and wife, the Fixer and the Fighter. He’s a Handyman who can repair anything, but he’s helpless when it comes to his wife’s terminal illness. Stinging electric riffs buttress soothing acoustic notes, mirroring the way  he busies his hands, unable to sooth her pain. She Remains pragmatic; “The fighter says somethings just can’t be fixed, touching her cross on her necklace, reminding the fixer she still believes, he whispers ‘then ask for a miracle please’/The fighter is fighting so damn hard, she’ll sit on the chair in the backyard, and the kids will come later on, pretending nothing is wrong.”

On the tracks that are collaborations, music and lyrics run the gamut of genre and emotions. The rollicking “Happy People,” co-written with Haley Whitters, matches muscular guitars to rumbling bass lines and propulsive rhythms. The lyrics cleave a little too closely toward the Golden Rule, but offer this gentle observation; “Life is short and love is rare, and we all deserve to be happy while we’re here.”

“You Can’t Break A Woman,” splits the difference between Torch and Twang. A joint effort from Lori, Hilary Lindsey and Liz Rose, the opening phrase, “Whiskey breath don’t phase her anymore…” sets the scene. An emotionally bruised and battered wife confides that she stays in a loveless marriage, disinterest numbing her pain.

Co-written with Luke Laird, “The Way Back Home” offers life lessons to a child who has come of age. The bare-bones instrumentation includes honeyed acoustic riffs, wily bass runs and kick drum beat put the focus on the lyrics’ maternal homilies; “Keep a $20 in your pocket and a book for reading, if the truth hurts your throat keep mercy on your tongue/Remember forgiveness is a choice, The bitterless all reap it, that way you always know your way back home.”

Finally, the title track, written with Natalie Hemby and Aaron Raitiere, is a wry meditation on nature and nurture. Plangent acoustic notes intertwine with rippling electric riffs as lush mellotron sounds wrap around a brisk melody. A sideways homage to the old adage “The apple doesn’t fall far from the tree,” it becomes a metaphor for Lori’s circuitous path to stardom; “I’ve tried leaving and being something I was never meant to be/And I’ve tried staying, ever changing and standing in one place just like that tree.”

In a record packed with sparking songcraft, two tracks stand out, “Young and Angry Again” and “The Lot Behind St. Mary’s.” The former is anchored by Byrdsy electric guitar percolating bass and a buoyant back-beat. Lori revisits her rebellious teen years, hoping some of that spark remains; “Lighting cigarettes just to hold ‘em, up in the air, singing never got old/Throwing bottles at a high school chain link fence, telling yourself all you’ll ever need is a heart full of fire and gasoline/I could use a little of who I was in that way back then, to be young and angry again.”

The latter is also something of a trip down memory lane. More contemplative, it’s powered by finger-picked acoustic filigrees, thrumming bass lines, keening electric riffs, thumping drums and mellotron colors. Unlike, say, Bruce Springsteen’s “Glory Days,” Lori isn’t looking to relive past triumphs. Her lyrics evoke a yearning for her younger years while maintaining a healthy appreciation for her life in the present tense; “Cigarettes in the August sky, Drinking the beers you convinced your older brother to buy….and I know we can’t go back in time, but every now and then you look at me and I know you wonder why we can’t/Get back to When September was our only adversary, in the lot behind St. Mary’s.”

Eleven records in and Lori McKenna’s music is reliable, but never predictable. The Tree envelopes the listener like a frayed denim jacket; the record offers rich melodies paired with vivid stories that feel familiar and true.