Luna, along with Jennie McNulty, “one of the top ten lesbian comedians,” according to Curve Magazine, rising LA star Nick Stadler, Palm Springs comedian Teri Conley as well as host Max Mitchell (World Series of Comedy) promise an evening of packed with laughs.

A trail-blazing little person in the entertainment world, Selene Luna, at 3’10”, is a small package with very big presence. A veteran of the stage and screen, Selene cut her teeth performing in clubs and art venues, and quickly became a darling of Hollywood’s underground scene.

The world’s first little person to cultivate a career in the Neo-Burlesque movement, Luna was an original member of the Velvet Hammer Burlesque, which toured internationally, and was a featured dancer in the undisputed Queen of Burlesque, Dita Von Teese’s Burlesque: Strip Strip Hooray from 2009-2014.

Luna is probably best known for her role in Lionsgate’s feature, My Bloody Valentine 3D, and her role as Margaret Cho‘s assistant in Vh1′s The Cho Show– a performance that landed her a nomination for MTV LOGO’s NewNowNext: Brink of Fame: Comic Award. To date, Luna has written and performed six original one-woman shows, most recently Born to Be Alive, produced by the Lily Tomlin/Jane Wagner Cultural Arts Center.

Luna’s stand-up comedy has led her to work alongside comedy legends Roseanne Barr and Robin Williams. Luna’s most celebrated stand-up comedy credit has been opening for Margaret Cho on various national tours. Selene Luna has carved a niche for herself, and continues to break the stereotypes of little people in entertainment.  More on Selene Luna @ seleneluna.com.

With something for everyone, LOVE & LAUGH is only $15.00 advance or $20 at the door.  Advance sale tickets @ MaxMitchell.net or Brown Paper Tickets  Show starts 7PM and doors open with dinner and full bar at 5pm.  3-Course Prix Fixe dinner available for $24.95. Dinner reservations call (760) 325-1188.  Oscars is located at the corner of Tahquitz Canyon Way and Indian Canyon, in the heart of Palm Springs. 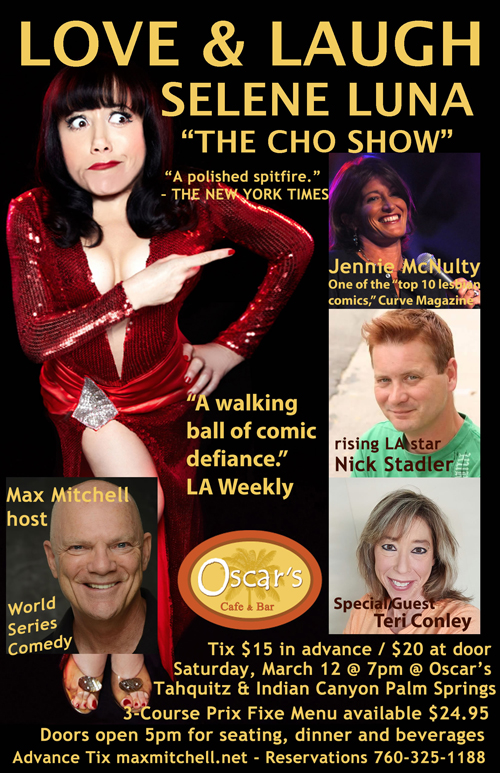