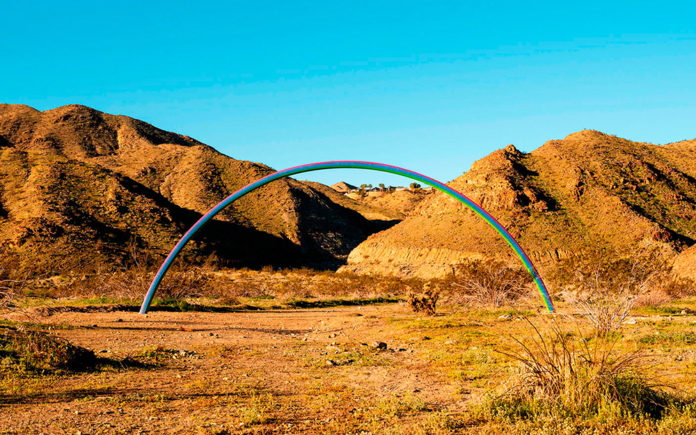 Desert X is an adventure – but one that needs to be tempered with caution. Several of the installations require a bit of hiking and driving. Several are located on busy roads. Sadly, people are forgetting basic road safety. Exercise common sense and caution. Gazing at the art is not an excuse to wander without taking in the surrounding.

Pia Camil’s installation, Lover’s Rainbow, stands across  the highway from the Barones’ Rabbit Collection on Highway 111 in Rancho Mirage. There is parking at the mall area and a convenient traffic light to allow for safe crossing.

Camil resides in Mexico City. She has a BFA from the Rhode Island School of Design and an MFA from the Slade School of Fine Art, London. Her work is most often associated with the Mexican landscape, the aesthetic language of modernism and its relationship to retail and advertising. Her work has been exhibited internationally and she has had several critically praised recent solo-exhibitions. Her recent work seeks to engage “in public participation as a way to activate the work and engage with the politics of consumerism.” 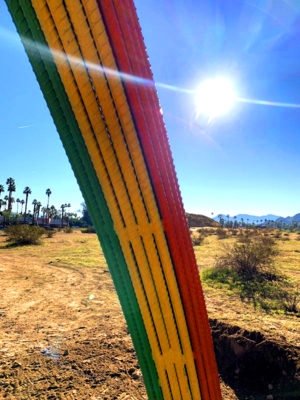 Her work has been in a variety of medium. Camil formed the band El Resplandor (“The Shining”) with musician Esteban Aldrete and actress Ana José Aldrete. They often performed vibrant colored clothing created by Cami. She carried this flair for textiles in to her work. For example, her series Espectacular (begun 2012), inspired by the billboards in and around Mexico City, is an ongoing series large-scale painting composed of hand-dyed and stitched textile strips. She views her process of the “romanticized urban decay and a critique of mass production.”

Camil began to expand the concept of textiles, mass production and consumerism. She has created several performance pieces. For Wearing-Watching, a commissioned art fair project for Frieze New York 2015, she handed out 800 ponchos to viewers attending the project.

Given this progression, the meaning of Lover’s Rainbow takes form. Lover’s Rainbow is set in Rancho Mirage and its companion is at US-Mexican Border near Baja. The work is painted rebar. The artist has described the work as twofold – “(E)xposed rebar usually signals development, but often in the Mexican Landscape we see those dreams thwarted and abandoned. The rainbows are symbolic of rain and fertility thus the act of bending the rebar into the ground is a way to re-insert hope in the land.”

“The mirror rainbows are meant to throw light on the current immigration polices – to see the issue from two perspective,” according to the artist’s statement.