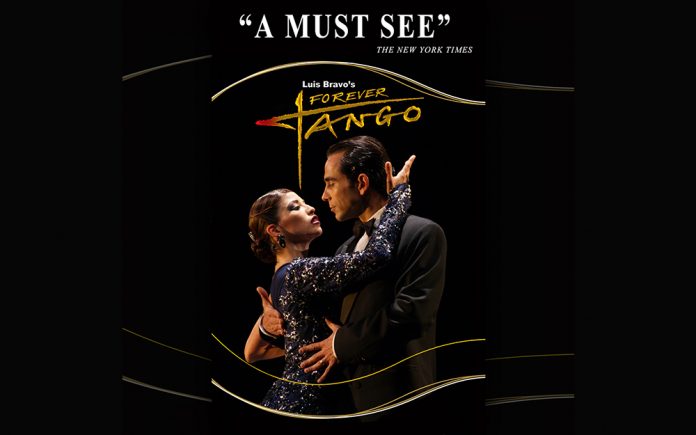 Sensuous and sophisticated, the tango inhabits a world where everything can be said with the flick of a leg, the tug of a hand, the tap of a foot and the arch of an eyebrow.

Created and directed by Luis Bravo, Forever Tango was voted Best Touring Musical by Bay Area Theatre Critics Circle in San Francisco—where it played an unprecedented 92 weeks at the Theatre on the Square, and has returned season after season. The show will be coming to the McCallum Theatre for one performance only, at 7 p.m., Sunday, March 13.

The performance is presented through the generosity of Linda and Manny Rider.

Forever Tango features 14 world-class tango dancers, one vocalist and an onstage 11-piece orchestra, including the instrument of the tango, the bandoneon, in an evening that celebrates the passionate music and dance of Argentina. The dances, performed to original and traditional music, are the result of collaboration between each couple and director/creator Bravo.

“The tango is a feeling that you dance,” says Bravo, “a story you tell in three minutes. It’s passionate, it’s melancholic. It’s tender, violent. You dance it with somebody—but it is so internal, you dance it by yourself. More than just a dance, the tango is music, a drama, a culture, a way of life.”

Forever Tango tells the story of the birth of the tango in 19th century Argentina, where thousands of men, having abandoned a disintegrating Europe to immigrate to South America, found themselves in the crowded abattoirs (packing houses), the bars and street corners of the arrabales (outlying barrios), and in the enramadas (brothels). The tango was born of this lonely and violent existence. Originally shunned by Argentina society as indecent, the tango became an overnight craze in upper-class Paris when Argentine intellectuals taught it when traveling abroad. The tango quickly spread across Europe and to America, and was eventually re-imported home to Argentina society, though not unchanged.

Luis Bravo is a world-class cellist who has performed with major symphonies throughout the world. His credits include appearances with the Los Angeles Philharmonic, the Colon Theatre Opera House, the Buenos Aires Philharmonic and other prestigious ensembles.

Forever Tango opened on Broadway in June 1997 for what was expected to be an eight-week engagement. It ran for 14 months and has since been back to New York on Broadway on three separate occasions, the latest being the summer of 2013 at the Walter Kerr Theatre.

Please note that proof of vaccination is required for entry into all McCallum Theatre performances. Masks must be worn at all times. For updated information on health and safety protocols, please visit www.mccallumtheatre.com.

Tickets for this performance are priced at $85, $65 and $45. Tickets are available at www.mccallumtheatre.com or by calling the McCallum Theatre Box Office at (760) 340-2787. The McCallum Theatre, located at 73000 Fred Waring Drive, Palm Desert CA 92260, accepts payment by cash, personal check, VISA, MasterCard, Discover and American Express.

The McCallum Theatre Box Office, its phone center and website, are the only authorized outlets for tickets to performances presented at the theatre.

Tickets purchased from any other sources, such as brokers or secondary market websites, are purchased at consumer’s own risk and cannot be guaranteed as valid.