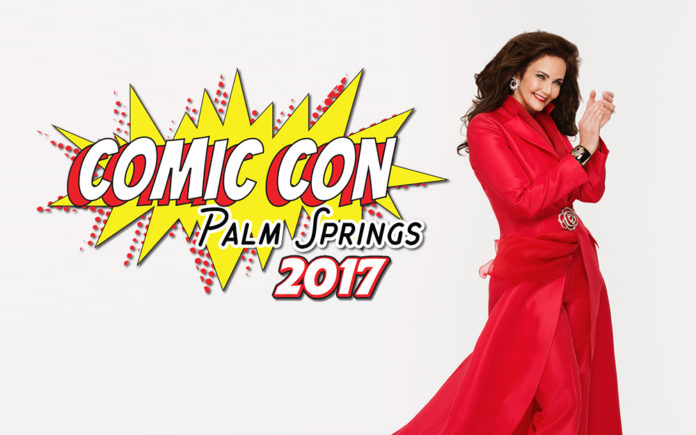 Carter Will Perform “The Other Side of Trouble” with her all-star band singing Jazz, Blues, Country and Pop Songs at Her First Ever Comic Con Appearance

Comic Con Palm Springs will feature a one night-only performance by singer and actress Lynda Carter on Saturday, August 26 at 8 p.m. in an intimate custom-built theater in the Palm Springs Convention Center.

Carter, best known for her role of Wonder Woman in the 1970’s television series, is an accomplished singer who has performed to rave reviews for sold-out crowds around the world. Her 90-minute show at Comic Con Palm Springs will feature her distinctive versions of jazz, blues, country, pop and original songs from her popular The Other Side of Trouble tour. This will be the first time the actress and singer will perform at any Comic Con event.

In addition to her performing across the country from venues like the Kennedy Center in Washington, DC to New York’s Jazz at Lincoln Center, Carter was busy this past year appearing as the President of the U.S. on the popular CW show “Supergirl” in addition to filming a role in the upcoming “Super Troopers” sequel.

She attended the premiere of the new “Wonder Woman” film in Hollywood last month and she just was named as one of the 2018 Honorees for the Hollywood Walk of Fame where she will get her very own star on the famed boulevard. Her CD’s include Crazy Little Things and At Last and she has just put the finishing touches on a new cd which will be released later this year.

“We are so excited that Comic Con Palm Springs will be the first Comic Con ever to feature an appearance and performance by the incredible Lynda Carter,” said Comic Con Palm Springs Founder and Executive Producer Christopher Spellman. “We know people are traveling internationally to our three-day show specifically to hear Ms. Carter perform. We can’t be more thrilled about this unique opportunity we are providing to our attendees and we hope that while here they also explore the rest of Comic Con Palm Springs.”

People Magazine writes “…Lynda is a knockout with lots of talent. She sings, she dances and makes you smile…”

LA Times writes “…expect to hear a well-polished set from a performer who can deliver a song even better than she can take down a bad guy.”

LA Examiner writes “Lynda Carter hits the evening out of the park! Her heavenly voice will sweep you off your feet. She is not to be missed!”

Comic Con Palm Springs returns to the Palm Springs Convention Center August 25-27, 2017 featuring an array of artists and celebrities. The inaugural event last year attracted more than 15,000 attendees, and this year it is expected to attract nearly 25,000. Headline celebrities include Marvel Comics founder Stan Lee (who will bring with him his extensive personal collection of Marvel memorabilia, which will be on display during the event), Rob Lefeild (artist/creator of Deadpool, Cable, and more), J. Scott Campbell (artist of Danger Girl and Spiderman), actor Khary Payton (Walking Dead), Tom Kenny (voice of SpongeBob Squarepants), actress Dana Gaier (voice of “Edith” in Despicable Me), actor Corbin Bernson (featured in Psych, LA Law, Major League, and Star Trek the Next Generation), and many more. The popular Zombie Walk, CosPlay costume contest, and merchandise exhibitors will return. For more information, call (760) 359-8372 or go to info@comicconpalmsprings.com.