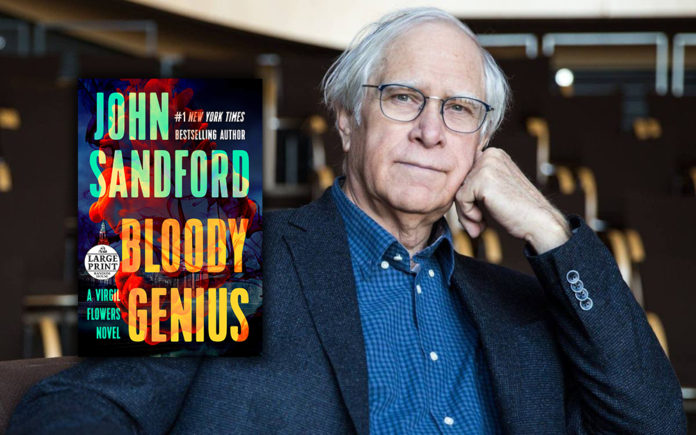 There is an alt-world that exists in academia.  University departments are often territorial, political, competitive, and lucrative.  Research can be driven by greed, ego and scholarship.  In John Sandford’s Bloody Genius: A Virgil Flowers Novel (Putnam, 372 pages) a death on campus sparks a different kind of education.

After Barthelemy Quill, a renowned medical researcher is killed in the state university’s library, the case goes cold for lack of evidence.  His cellphone, car keys and laptop are missing.  There are no fingerprints or DNA.

Virgil Flowers, who is a member of the Minnesota Bureau of Criminal Apprehension (BCA) – is asked by the Governor to assist in the investigation and find the killer.  He reluctantly joins forces with Margaret Trane, the lead detective.

Quill was both a medical doctor and a Ph. D.  He was successful and very wealthy.  Quill ran the medical research department and laboratory at the state university where he was considered a womanizer, confrontational, selfish and mean.  More people on campus disliked the man than liked him.  Even his ex-wives and daughter didn’t like him.

The Cultural Science department chair, Katherine Green, had problems with Quill.  She and Quill fought over the relative importance of science versus medicine. Rather than department cooperation and collaboration, they had rivalry.  A confrontation between the two department heads leads to name-calling and a chair being tossed.

There are so many possible suspects, from professors, students, and campus employees, that Flowers worries the crime may go unsolved.

This is Sandford’s twelfth Virgil Flowers novel.  In this story, Flowers is more reluctant than usual to take the case and he must convince detective Trane he will not over-step her authority — or steal her glory.  He just wants to solve the case, and get home to his girlfriend, pregnant with twins.

The story starts out strong.  When the murder takes place, and the murderer gets away, there is a witness.  Of course, she didn’t see much because she was hiding.  The woman takes off when it’s safe – not even stopping to see if Quill is still alive.  This is what got me hooked.  The mysterious witness decides to stay quiet and out of the picture.

The story goes all over the state and campus as Flowers tries to narrow down the suspects.  Nothing adds up.  There are too many clues that go nowhere.  It takes Flower’s pregnant lover to show him that he has been given false information (the game “Clue” of all things).  And, there’s a waitress, a fan of NCIS, who tells him he has already met the murderer!

I liked that the amateur detectives were sharper than Flowers.  I lost interest with all the misleads.  There was nothing compelling being uncovered.  The witness who was with Quill in the library finally appears but with relatively little to add.

The campus university setting was colorful. I appreciated the eclectic professors and students who challenged Flowers.  They often asked better questions and had more interesting theories.  I appreciated that the academics found Flowers’ job most interesting as a case study about human cultural behavior.

I was hoping the mystery of the murder would be more involving pertaining to Quill’s research.  There was very little about his work on campus.  I wanted to learn about the significance of U.S. university medical research and what was at stake.  Author Sandford hints at it, but it goes nowhere.

I’ve always liked the Flowers character and his way of detecting.  But this time, I noticed a more patronizing attitude toward the women in the story.  Not disrespectful so much as objectifying them. He often summed them up by their appearance.  With the #metoo movement, maybe I just didn’t notice it before.

Yet, the women in the story are no pushovers.  They are strong and capable.  When it comes to power, the academic world may be an equalizer.