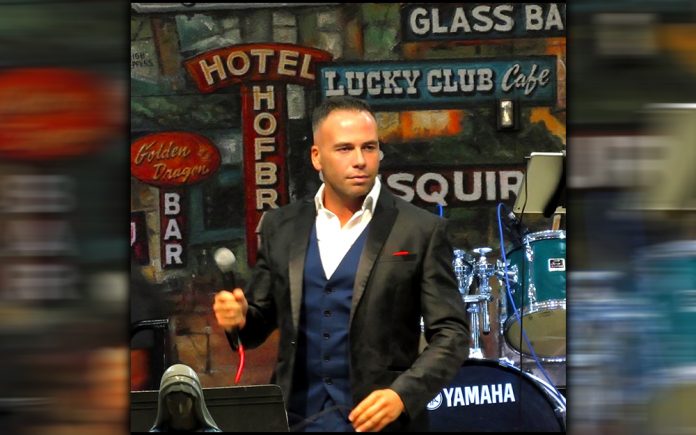 What do baseball and music have in common? Both are arenas that foster ambition and dreams. Marc Antonelli dreamed of pitching in Major League Baseball. He was on his way to that dream when a shoulder injury caused him to switch dreams. This time his dream was music. Marc took to that dream like no one could imagine.

At 17 he joined his school chorus. He studied vocal performance at the Boston Conservatory and Berklee College of Music. Along the way he became acquainted with music theory and musical arrangement. “Berklee gave me the tools to survive in this particular industry,” said Marc.

“I am inspired by the great voices that preceded me – Frank Sinatra, Mario Lanza and Andrea Bocelli, for example,” said Marc. “These men possess great talent and have a presence. You know where they are every second, they stand on the stage and you feel that same presence in every recording they made.”

For 32-year-old Marc, his professional journey began when he was singing at a Boston wine event. There Marc was approached by the Tropicana Resorts. By 2010, he was performing at Tropicana’s Tango Room. Within six months the CEO of the Tropicana had Marc headlining his own show, an almost unheard-of event. The show was created by James Passio. Passio, screen writer and producer, currently co-manages Marc.  “Jimmy put together a true Vegas show. I headlined with a band, backup singers and of course dancers,” said Marc.

“After that show completed its run, I left Atlantic City to perform in Philadelphia. While there the Resorts International Group asked me to headline at the Superstar Theater with a show called Unknown and Irresistible. To have a residency like that is an amazing experience for any performer but for me, a young singer, it was beyond any expectation I had,” continued Marc. “I was standing on the same stage where Sinatra, Dean Martin, Elvis and other greats had performed. I sang “My Way,” sitting on the same stool Sinatra used. There are no six degrees of separation in this business- there is just a continuous connection.”

“While working in Philadelphia I met Sonny Vellozzi, who would be instrumental in my move to Coachella Valley. Sonny not only co-manages me, but he is also an actor, screen writer and television/movie producer. He is currently producing Mark’s Place a new web series being shot here in the Coachella Valley.”

In 2017 Marc began his move West – first stop was Las Vegas. There he performed at The Venetian Resort and Casino. In 2018 and 2019 Las Vegas also gave Marc the opportunity to perform with renowned tenor, Andrea Bocelli .

Like Marc, it was a sports injury that lead Bocelli to music. Following a football accident, Bocelli was diagnosed with Traumatic glaucoma. By the age of 12 Bocelli was completely blind. He went on to record 15 albums of both pop and classical music, three greatest hits albums, and nine complete operas. Selling over 90 million records worldwide, Bocelli continues to successfully crossover classical music to the contemporary music world. “I have been honored to sing with Bocelli twice. That experience is both amazing and humbling. He has mastery of the classical with contemporary appeal inspires me,” continued Marc. “A dream I have is to be the American counterpart to him.”

“David Foster is another inspiration to me. Foster has worked with many performers and continues to create memorable sounds for each of them. He manages to capture what is the vocalist as well as the music. I arrange the work I perform, be it Opera or Broadway and anything in between. I try to find the essence of the music and be true to me,” continued Marc.

While Marc is a new face on the local music scene he has, in a short period of time, created a critical stir – playing at Melvyn’s, Bernie’s Supper Club, AJ’s on the Green and other local spots.

His ability to move seamlessly from Rat Pack standards, to Opera, to Broadway to Contemporary music has proven that Marc is not a one hit wonder.

With a repertoire of classical, pop, jazz, musical theater and other contemporary stylings in his arsenal, Marc further captivates his audience with the ability to sing in English, Spanish, Italian, and French. In the process he has built a formidable following  that would make his idols proud. “I have been able to do so much here because of the people who support me. Not just Jimmy and Sonny, but the local music community as well as the public. I never expected such support from this community. But here it is – a team!”

So, what are the next steps for Marc? “I am performing five nights a week in addition to private events. But there is so much more coming!” noted Marc.

“We are in the process of writing a show, An Evening of Romance. As this area is home to many talented individuals, we want to showcase that talent. In February we will be holding auditions for local female vocalists. From these auditions we will select one to join me for this show. I am where I am because someone was willing to take a chance on me, a young unknown singer. I do not take such opportunities lightly. ”

While every calling has its hurdles, at this stage in his career Marc is showing the world he has more than the ambition to succeed, he has the talent to make it real.