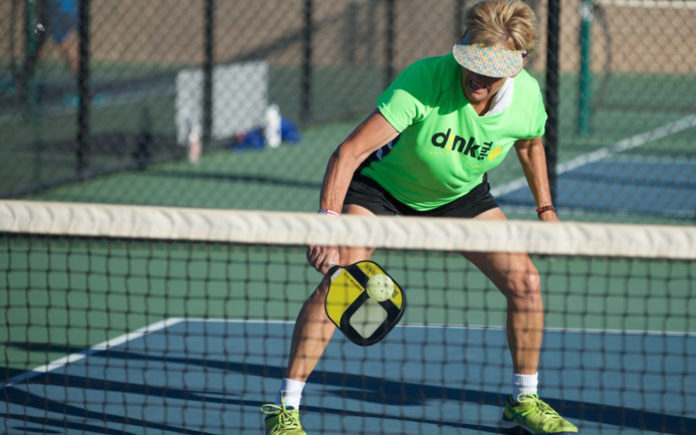 With over 2,200 players representing nearly all fifty states, this year’s championships recorded 4,293 matches with players ranging from as young as eight years old to as seasoned as ninety years old. The tournament was the largest in the history of the sport, with the largest purse in history at $75,000. Barney McCallum, one of the three original founders of pickleball, and a partner in the first company to provide pickleball equipment was in attendance and moved to tears at the evolution of the game he invented along with Congressman Joel Pritchard and Bill Bell one summer day in Bainbridge Island, WA over fifty years ago. For the past week, Indian Wells Tennis Gardens waged an impressive campaign to cement a permanent home for Pickleball, the fastest growing sport in America as they played host supreme to the Margaritaville USA Pickleball National Championships.

Crowds were energetic across the 44 courts constructed specifically for the tournament, essentially turning each of the outdoor tennis courts into pickleball courts (one tennis court can be turned into four pickleball courts since the court size is much smaller). Vendors from the industry and fans from across the valley as well as all across the country and a couple from Canada all expressed enthusiasm for the growth of the sport and the excitement around being part of history as the sport achieved a monumental turning point with live streaming and coverage provided by ESPN3. Margaritaville provided live music and entertainment throughout the event while stilt walkers energized the crowds between match play.

Executive Director of USAPA, Justin Maloof, expressed tremendous gratitude for the production team and Indian Wells Tennis Gardens for providing a top-notch event that elevated the sport with a glimpse into a BNP Paribas-like future. “This really raised the bar for us! Having partners like Margaritaville and our platinum level sponsors help us achieve something I couldn’t imagine possible for several more years,” said the elated leader of the sport. Maloof also expressed a desire to bring in more vendors and sponsors next year, especially some of the companies that have helped push pickleball along for several years. He said with the late February announcement, many companies already allocated budgets, making participation in this year’s event too much of a stretch. However, he is already receiving calls from businesses outside of the sport interested in sponsoring next year’s championships and expects even greater levels of participation. Players not familiar with Indian Wells Tennis Gardens said the pictures did not do the venue justice and the ability to have the opportunity to play in front of so many fans while competing with the top players in the game really added to their experience and anticipation for what will come next year.

On Saturday evening, the crowd inside Margaritaville Championship Court witnessed a showdown between Pro Men’s Doubles teams Dave Weinbach-Matt Wright and Kyle Yates-Ben Johns that proved to be a showcase of the top athletes in the sport. ESPN3 Court side coverage added magnitude to the match as the pumped up players battled in a heated matchup with brilliant plays coming from each pickleballer. In a tie-breaker final, the gold medal scores of 8-11, 14-11, 11-2 and the 15-6 decider that ultimately crowned Yates and Johns as the Champions, left the fans feeling like the real winners! Even the DJ, a newcomer to the sport was lost in the intense back and forth action as Yates and Johns continuously pinned the pickleball to their opponent’s chests without a chance of a return. Yates threw his hands to the heavens as Johns appeared stunned at the moment of realization- they had just defeated Weinbach-Wright to win the Gold! The teammates embraced in celebration before fans swarmed for photos and autographs. ESPN3 interviewed the duo and accentuated the turning point for the sport. Congratulations to USAPA, Indian Wells Tennis Gardens and all the participants that made this such an incredible event for the Valley for years to come.