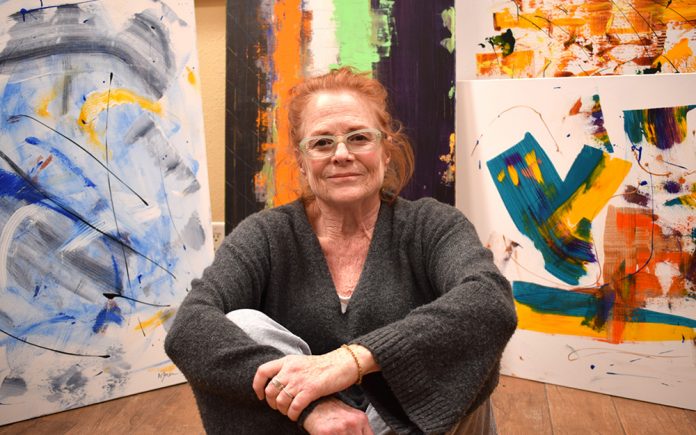 Artist Georgia O’Keeffe once said that “To create one’s world in any of the arts take courage.”

To build a bridge between artistic genres, not only takes courage, but the ability to allow the imagination free flight to the highest of creative peaks.  When Marian Jones, left Texas in pursuit of an acting career in Los Angeles, she could not have imagined the heights her creativity would climb. After 30 years in theatre and film as an actor, director and award-winning producer, she has found a new form of artistic expression as a painter.

While her first professional job was in Dallas with the Shakespeare Festival, Los Angeles opened up a whole new world. Directing and Producing Theatre, winning Ovation Awards, (LA’s equivalent of the Tony’s) and even founding her own theatre company, The Ivy Theatre Company.  Marian Jones became an accomplished and successful woman in the Performing Arts and an integral part of the Los Angeles Theatre Community. Her mission with The Ivy Theatre was to expand visibility and to create a social and political awareness of Lesbian artists. Her efforts and support have made great contributions to the lesbian theatre community.

When her mother became ill, Jones returned to Texas to care for her, but upon returning to California in 2019, she found that her inspirational focus had shifted.  No longer wanting to work in the performing arts she searched for a new form of creative expression.  While soul searching during a walk along the beach, she looked down and saw a beautiful and natural abstract image created by the sand and her muse spoke.  She began taking photos of abstract sand images,  many shown at online galleries, as well as an Art Gallary in Kansas.

The Pandemic changed our world view in so many unimaginable ways.  Lives and perspectives were altered forever.  It was during the shutdown that circumstance and creative energy gave her a final nudge into the world of the visual arts.  From photography to expressing the images on canvas, she began work as a painter of abstract art.  Jones, indicates that her paintings are always inspired by her surroundings, such as beach, rocks, sand, waves and her love of music.

“I started with 8×10 canvas paper and I’m now working on larger stretched canvas acrylic abstracts. It has come very naturally to me, it got me through the Covid lockdown and I have not stopped painting. For me it was finding beauty and some sense of joy in the isolation of the pandemic.” Jones, stated when asked about her process in transitioning from the performing to visual arts.  She went on to say that, “painting is so very different from my acting and producing work in that I am painting my feelings. In theatre I always worked with the words of someone else bringing life to those words. In painting it is all about my life, my emotions and my expression of those experiences.”

Jones, is now working with art consultant Ellen Nettles, of Art Now Management in New York, City. Nettles, has been a member of the New York art scene for many years and is currently providing great support for this emerging painter. Marian’s paintings became an immediate success and have been added to private collections across the country, with hopes that more will open up with National and International art collectors as well as more galleries. She is even open to working with interior designers as a part of their residential designs. 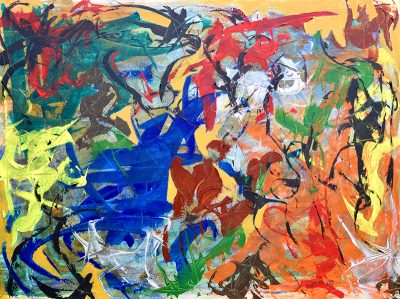 Though she has only been painting since 2020, Marian indicated that it seems like it has always been a part of her life. She is currently developing a series of Abstracts for the Nursery. In reading about the importance of color in a child’s development, she is working on a program that would allow parents to purchase a different painting for their child from nursery age to teens.

Jones stated that “From the stage to canvas was quite easy given that they both require a strength of expression, observation, interpretation, risk, and vulnerability.”

A year and a half of social isolation forced many to become more introspective and creative with finding artistic outlets.  While searching for new ways to give flight to her muse, Marian Jones, discovered that an artist is not bound by what they have always done, but rather unbound by what they have yet to discover.