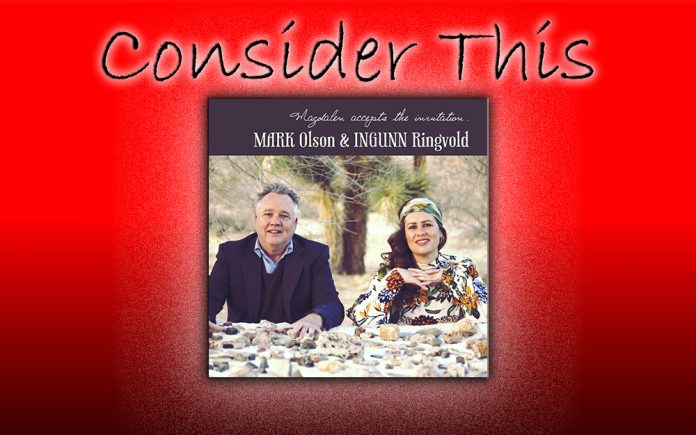 Mark Olson and Ingunn Ringvold have been making music together for nearly 15 years. They met when Mark was on tour, after a show in Bergen, Sweden. Ingunn had begun making a name for herself, as a respected singer-songwriter in her native Norway, with four solo albums under her belt. Their connection was immediate, the pair clicked on both a personal and professional level.

Of course, Mark has been a working musician since the early ‘80s. Born in 1961, the Minnesota native grew up in a family of farmers and teachers. He began playing guitar when he was about 12 years old. Following his father’s death, he spent his teen years with extended family in L.A., returning in time to see the Minneapolis music scene explode.

His own music drew inspiration from Classic Country like Hank Williams, Sr. and the Louvin Brothers along with the late ‘60s records from Bob Dylan and the Byrds, as well as the Country-flavored Rock of Flying Burrito Brothers and Sir Douglas Quintet. He connected with Marc Perlman and Gary Louris and formed The Jayhawks. Their blend of traditional Country, Folk and Rock somehow found a home in a thriving Twin Cities scene that included the Paisley-tinged R&B/Soul of Prince, the driving Thrash Pop of Husker Du and the ramshackle Punk of the Replacements.

The Jayhawks released their first couple of albums on independent labels, and that exposure got them signed to Rick Rubin’s Def American label. They made a pretty big splash with their first major label effort, Hollywood Town Hall, which arrived in 1992. The album actually went into heavy rotation on MTV, providing tart juxtaposition to the Grunge-a-palooza bands that had begun saturating the airwaves. Their fan base grew when they began opening for up-and-comers like Black Crowes and Pearl Jam, heavy-hitters like Tom Petty & The Heartbreakers, and legends like Johnny Cash.

In 1995, they were poised for greatness when they released their watershed album, Tomorrow The Green Grass. But before Mark could truly inhale the sweet smell of success, he quit the band, in order to spend more time with his wife, Victoria Williams.

A talented singer-songwriter in her own right, Vic had been on tour opening for Neil Young a few years earlier when she was diagnosed with multiple sclerosis. Rather than head out on an endless tour with the band, Mark chose to stick close to home (the couple had recently relocated to Joshua Tree), in order to monitor her health.

Still intent on making music, the pair quickly joined forces with multi-instrumentalist, Mike “Razz” Russell and formed The Original Harmony Creek Dippers. In the span of seven years, the Creek Dippers released five well-received albums. In the early days of the 21st century, Mark recorded his solo debut, unfortunately, by 2005, Mark and Vic had come to the end of their road. The dissolution of their marriage and professional relationship was mostly amicable, but heartbreaking nonetheless.

Mark continued to make solo albums and also began to tour, it was around this time that he met Ingunn, and also reconnected with his Jayhawk partner, Gary Louris. Gary added some harmonies to Mark’s 2007 album, Salvation Blues, which led to their wonderful  duo collaboration, 2009’s Ready For The Flood. That experience paved the way for a full-fledged Jayhawks reunion, replete with a new album, Mockingbird Time and tour (including a stop at Stagecoach in 2012).

At this point, Mark and Ingunn had completely cemented their romantic and musical relationship. Unfortunately, convoluted visa issues meant the couple couldn’t return to Joshua Tree, nor could they remain in Norway. Somehow, they ended up in Armenia and fell in love with its people, culture and music. During their time there, Ingunn learned to play the qanon, the zither-like string instrument that is featured in Armenian, Greek and Turkish music.

Finally, they were allowed to return to the U.S. a few years ago. Ingunn had added some musical color to a couple of Mark’s previous solo efforts, but 2014 saw the release of their first official collaboration, Good-Bye Lizelle. Three years later they followed up with Spokeswoman Of The Bright Sun. Now they have returned with their third long-player, the first to bear both their names, Magdalen Accepts The Invitation.

The album opens with “Pipestone I Won’t Be Back,” a painterly ode to the tiny Minnesota town that butts up against the National monument. Dreamy and pastoral, the track is powered by willowy chamberlain notes, gentle acoustic guitar, rock-ribbed bass and a stutter-step rhythm. The meandering melody is matched by evanescent lyrics that quietly insist “Love is a dream that calls and always finds you.”

Luckily, for those of us still quarantined and confined, both “31 Patience Games” and “Elmira’s Fountain” offer a bit of an aural travelogue. The former recalls one of the happiest periods for the couple, when they got married in South Africa. The song opens with strummy guitars and Mark’s plaintive vocals, and are quickly bookended by mellotron, strings, Ingunn’s wistful harmony vocals and skittery qanon. Snatches of memory; “Raindrops hanging on a wire,” only tell some of the tale, but confess all at the finish; “all my life, all my life I’ve loved you,” completes their story

The latter returns the pair to Armenia, when days were spent visiting parks and Eastern orthodox churches, drinking from mountain springs and rivers and swimming in Lake Sevon. These images are vividly brought to life with lush acoustic arpeggios, ascending bass lines and quiescent strings. Mark and Ingunn’s harmonic blend offer to “chase the blues away,”

Mark’s began making his own music as a kid, and the best songs here are rooted in the Baroque Folk sounds he grew up on that were originally pioneered by late ‘60s California bands like the Byrds, Jefferson Airplane, the Mamas And The Papas and Buffalo Springfield. Take “Excelsior Park,” acoustic guitars lattice over effervescent chamberlain, flowery mellotron, sinewy bass lines and percolating percussion. The lyrics offer a wistful encomium to a Lake Minnetonka amusement park; “Please let there be one way to see, all of the mirrors are lost and found, where are all the childhood friends now?”

On “April In Your Cloud Garden” twangy electric guitar cuts through sylvan strings, acoustic filigrees, spidery bass lines, as piquant qanon notes lick at the edges of a propulsive beat. The sprightly arrangement and instrumentation nearly succeed in camouflaging lyrics that urge an escape from reality. Tending to one’s “cloud garden,” offers a welcome respite from our day-to-day sturm und drang.”

There’s an ethereal grace to “Christina Hi,” which is anchored by rippling qanon notes, airy strings and an insistent tambourine shake. Opaque lyrics like “Words are choices you make, when you’re told to stay or go/If I had my way to live again, I would walk with you again my friend always,” offer something of a sideways carpe diem

Best of all, “Children Of The Streetcar” celebrates the San Francisco music scene that led up to the Summer Of Love. Even as the song’s winsome melody, lithe arrangement and stacked harmonies hew more closely to the Sunshine Pop sounds of Free Design, the Cowsills and the Rose Garden. Shimmery and kaleidoscopic, it blends plangent guitar, descending strings plucky qanon fills and courtly dulcimer, over a slipstitch rhythm.

Other interesting tracks include the rueful “Silent Mary” and cheerful Country comfort of “You’ll Find The Morning.” Written on their Joshua Tree back porch, the latter is fueled by jangly acoustic riffs, knotty bass lines, high lonesome strings and a kick-drum beat. Lyrics as desolate and economical as their environment, boil their existence down to its essence; “See everything change, no one will know your name, enough of your fight, a rattlesnake wants your life.”

The album closes with the bucolic “Black Locust.” The tender and tentative melody is enveloped in feathery guitars, see-saw strings, flinty bass lines and a diffident beat. Amongst the newly planted trees, the couple are sheltered from the chaos and confusion, gossip mongers and barbarian event manipulators of the world at large. The lyrics ask us to “Lift up your heart into the sky, won’t you lift your heart with mine?” A potent request, made more compelling by recent depressing and divisive events.

Mark and Ingunn play the lion’s share of instruments here, acoustic and electric guitars, Spring Tree and dulcimer, mellotron, chamberlin, tambourine and qanon. They also receive some essential assistance from longtime compatriot, Lewis Keller, on bass and drums, as well as Ruben Pozo on electric guitar and local superstar Danny Frankel on percussion.

Like the couple’s last record, the original tracks were recorded on a Nagra field recorder, Mark handled the analog engineering and Ingunn took care of the digital. Formal sessions took place during the dog days of summer at Thermometer Shelter Studios, which is located near Death Valley Nataional Park.

Magdalen Accepts The Invitation is warm and inviting, an aural banquet that is equal parts sumptuous and spare. Moving past the lean economy of his original Folk and Country influences, Mark and Ingunn have created a Chamber Folk sound that takes chiaroscuro moods and suffuses them in rich technicolor sounds. Most of all, this album is a balm for the soul, and isn’t that what we all need, right about now?