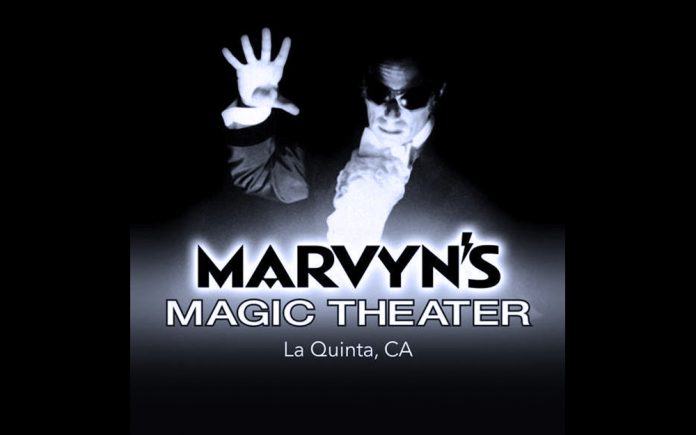 The holiday season is all about experiencing a little bit of winter magic, but for an authentic dose of expert illusion and humorous audience entertainment, Marvyn’s Magic Theater in La Quinta has you covered for a night of intrigue.

Having just opened a couple of months ago, Marvyn’s Magic Theater has already become a one-of-a-kind hotspot for the Coachella Valley community. The 129-seat venue elegantly and comfortably seats audiences and caters to performers of worldwide acclaim.

“We knew that magic was unique in this area, and what we’re offering are acts that generally don’t come through the area or are seen in live entertainment because they travel constantly. We thought we would be well-received, but not at this level. I can tell people who visit are genuinely impressed when they come here because there’s no environment quite like it here,” said Marvyn’s Magic Theater host Jeff Hobson.

Hobson has made a name for himself in magical show business, with over 20,000 live performances, including two seasons on Broadway and fourteen years on the Las Vegas Strip under his belt. He will also be performing at Marvyn’s Magic Theater from December 26 to 29—the busiest time for the venue during Christmas week.

“Some of the acts that are performing on stage I’ve known for years, so I know we’re not just bringing new kids on the block. These are seasoned magicians,” explained Hobson.

The acts that perform at Marvyn’s Magic Theater change on a weekly basis, ranging from traditional magic acts to illusionists and comedians. John Shryock and Mari Lynn are the most recent duo to grace the stage with their dance and comedy-infused magic show, with Shryock having also performed at Caesars Magical Empire at Caesars Palace in Las Vegas and all three showrooms at the world famous Magic Castle in Hollywood.

It is a regular occurrence to have audience participation during the 75-minute long shows, providing an opportunity for interactive experiences and hilarious engagement between the crowd and the performers.

Other magic acts scheduled to perform during the 2020 season include Martin Lewis and Mondre’, Joseph Gabriel and Miss Katalin, and Matt Marcy and Jeff Hobson.

The Magic Theater’s namesake is derived from famed magician Marvyn Roy, who started performing professionally in 1949 with his wife Carol. Visitors still have a chance to see Marvyn in person, particularly on Sundays at the Magic Theater.

While Marvyn’s Magic Theater puts on a family-friendly show, all attendees must be 21 and over to enter the venue. Patrons are invited to enjoy the quirkily-decorated bar and live music that plays in the lounge prior to the show. Some pre and post show sleight of hand tricks are also performed lounge-side, engaging audiences with humorous banter and illusions in an intimate setting.

The venue is even open for patrons who do not purchase magic show tickets but still want to enjoy the lounge and open ambience of Marvyn’s Lobby Bar. A Magical Curio Shop and Dematerialization Chamber are just a few of the sights to see within the tastefully decorated and neon-hued parlor.

“What people really want is to have fun, and although there is a variety of entertainment here [in the Coachella Valley], I want the theater to be the place to go for a great time,” stated Hobson.