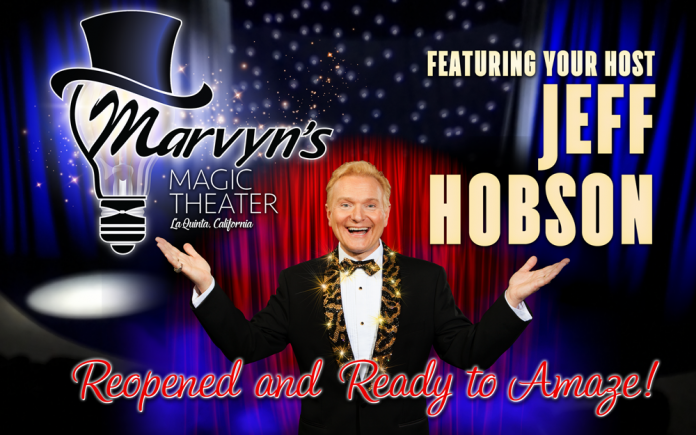 After many months of pandemic paranoia and quarantining at home, many are looking for a bit of magic in their everyday lives. Look no further than Marvyn’s Magic Theater in La Quinta for world-class entertainment, comfortable atmosphere, and extraordinary talent. After being closed due to the COVID-19 pandemic, the theater’s grand re-opening took place on September 30 and had a wonderful opening weekend with many old friends, customers, and family in attendance. 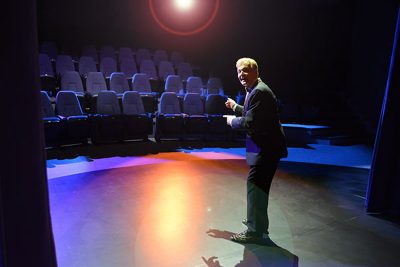 Entertainment Director and Producer of all shows, Jeff Hobson, views the re-opening of Marvyn’s Magic Theater as a huge sigh of relief. Like all other theaters, Marvyn’s Magic Theater had to abruptly shut down without much notice. The theater started to distribute gift certificates, and then refunds totaling over 80,000 dollars. After doing very well for the first five months of business, the sudden closure made the business disappear like magic.

“I hope that, this time around, we get to stay open if enough people support the theater. We are not a 501C. If we sell tickets, our theater stays open. Pretty simple. We also find that a majority of our customers stay in the Coachella Valley year-round, so I plan to keep the theater open during the summer,” said Hobson. 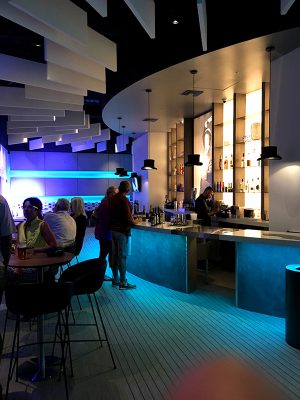 Marvyn’s Magic Theater safety protocols include limiting the showroom attendance with extra cleanings and sanitizing. The theater website states that the policy is “masks optional and vaccinations are highly recommended for entry”.  If and when any state mandates may arise, the theater is set to comply.

There are currently deals available on the Marvyn’s Magic Theater website, such as two-for-one tickets on select shows. Another feature is the purchase of a 10 percent discount, 20-ticket Magic Pass to receive a voucher code to secure tickets for regular performances Thursday through Saturday throughout the entire Maryvn’s Magic Theater 2021-2022 season from September 30, 2021 until May 31, 2022.  All ticket processing fees are waived, which is a total of 190 dollars in savings. Once a Magic Pass is purchased, guests will receive an email with the voucher code. When a show is selected, guests can pick out seats. Then, at the checkout page, guests apply the voucher code for each ticket. Guests do that for each ticket they want and the price will be subtracted from the order. Attendees are encouraged to check the website frequently as specials change monthly. 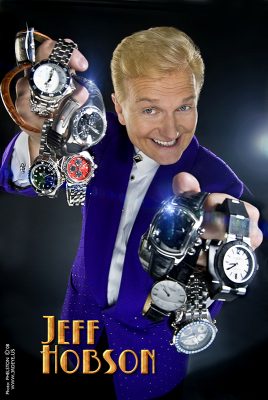 “We have Special Event Wednesdays where, once per month, we plan on having unique shows that aren’t necessarily magic-related. For example, October 13 is our special event, Hypnotic Mayhem show. It’s a great hypnosis-comedy show where you can See-The-Show or Be-The-Show! We also will have the famous comedian/ventriloquist Jay Johnson from TV Sitcom Soap fame. He’s hilarious with his buddy Bob. We also have our theater available for private buy-outs and personal special events,” revealed Hobson.

For the 2021-22 season, Marvyn’s Magic Theater has installed large-screen monitors on both sides of the lobby so the pre-show entertainment can be seen more easily. The price of tickets has remained the same as they were before the pandemic.  Hobson’s favorite addition is the booking of John Carney for Maryvn’s Lounge House Magician, as John is Hobson’s personal favorite magician in the world.

In addition to acting as host for Marvyn’s Magic Theater, Hobson has been featured on NBC’s The Illusionists prime-time special, HBO, Showtime’s Comedy Club Network, Fox Family’s Masters of Illusion, NBC’s World’s Greatest Magic, as well as being the star of Thames Television’s Magic Comedy Strip (a 16-week television series in England and the top-rated U.K.’s iTV with The Illusionists – Live from Broadway). 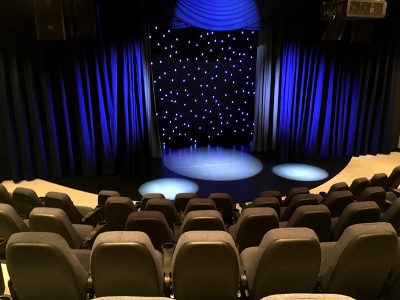 Hobson has experienced many memorable moments at Marvyn’s Magic Theater, including wedding proposals as an accidental part of the show and having long-lost relatives meet after many years. In some life-changing instances, a few female guests who lost their husbands have cried after shows saying that it is the first time they have been laughing and happy in months or years. 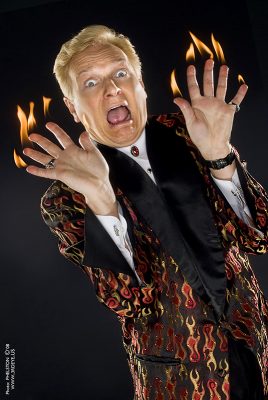 “There’s been an explosion of magic on TV over the past 10 years with America’s Got Talent winners. Plus, the internet has seen magic as the most views of any variety art in the world. Magic gives people a sense of wonder that most of us adults lost as a child. Today, so many of us are jaded to the world. There’s nothing we don’t know any more due to most every answer being online. But experiencing the art of magic in a live, intimate setting such as Maryvn’s Magic Theater, it can make us all feel like a kid again. Marvyn’s is a 21-and-over establishment so everyone present can experience those special childlike feelings again, not to mention laughing your butt off at the same time!” stated Hobson.

To read about the lineup or purchase tickets, visit www.MarvynsMagicTheater.com.