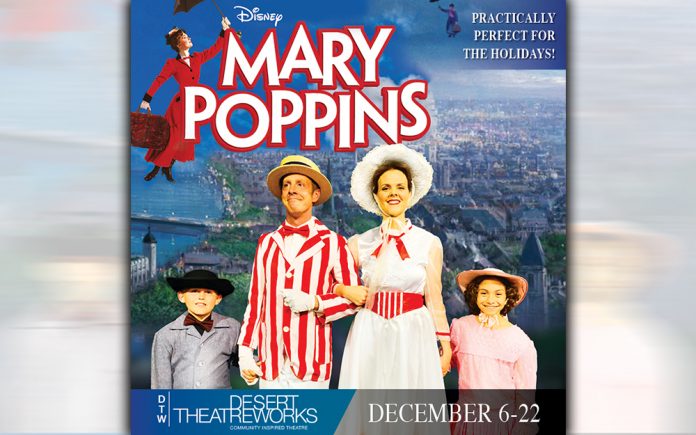 If you love being swept away with imagination practically perfect theatrical experiences, then look no further than Desert Theatreworks current production of Mary Poppins, a stage musical based on the children’s books written by Pamela Lyndon (P.L.) Travers.  Travers was Australian and English writer, who said that the character of Mary Poppins came from stories she made up for her sisters when they were all children. The first book of the series was originally published in 1934.  In 1993, theatrical producer Cameron Mackintosh met with Tavers, and acquired the rights to develop a stage play adaptation of her Mary Poppins books.

The stage production included music and lyrics by Richard M. and Robert B. Sherman, with additional music and lyrics by George Stiles and Anthony Drew and script by Julian Fellowes, as well as original songs from the 1964 Disney film of the same name.

Desert Theatreworks kicked off the evening with a medley of holiday songs performed by their creative Kidsworks Company. This incredibly talented group of young singers will have you instantaneously in the holiday spirit.

Mary Poppins is the story of the Banks family who live in Edwardian era London, (1901-1910.)  Things are not going well for the family, the children, Jane (Miracle Franco) and Michael, (Brayden Gravdahl) are out of control and going through nanny’s faster than a new one can be found.  Jane and Michael have their own ideas about what sort of caretaker they should have, while their parents, George (Michael Pacas) and Winifred (Katrina Dixon) insist on someone strict for the job. The children write up a wish list of qualities they want in a governess. Their father tears it up and throws it in the fire and within minutes, a mysterious young woman named Mary Poppins, (Michelle Mendoza) appears at their doorstep, with the children’s list of qualifications in her hand.  The family reluctantly finds that she’s the answer to their prayers, but in the most peculiar way. Mary Poppins takes the children on many fantastical and memorable adventures, along the way introducing them to her friend Bert, (James Owens,) a Chimney Sweep and other magical characters, as profound life lessons are learned.  Even the grown-ups learn a lesson or two from the nanny who advises that “anything can happen if you let it.”

It’s near impossible to hear the iconic songs from this show and not immediately smile…. “A spoon full of sugar helps the medicine go down.” Bravo to Music Director, Don Kelly.

Michelle Mendoza in the title role of Mary Poppins was pure magic.  She immediately took control of the show when she appeared and her absence was sorely noted in each scene staged without her. Mendoza, brings this fictitious character to life and makes us all wish we had such a mysterious and brilliant educator when we were growing up.  James Owens, was charming and engaging as the chimney sweeper Bert. What wonderful chemistry Mary and Bert shared.

Karen Schmitt, as Miss Andrews the terrifying former nanny of George Banks, ruled the stage each time she entered.  Every optimistic story has to have an evil doer and Schmitt plays this role to perfection.

Rebecca Havely, makes her return to the director’s chair for this wonderfully elaborate production and infuses much of her own magical style in the staging and character presentation of this show.  With so many characters, she does wonders with ensuring that each scene flows like silk into the next. I especially loved seeing Mary Poppins fly off, as her umbrella slowly disappeared through the exit.  Stacy Casaluci-Grenroc’s choreography brought real energy to this show and Daniel Gray’s set design was spit spot.

Lance and Ron Phillips Martinez have produced another winner with this production.  If you’re looking for a Supercalifragilisticexpialidocious, experience.  This is definitely the show to see.

Mary Poppins, can be seen through December 22nd, at The Indio Performing Arts Center, located at 45175 Fargo Street, Indio, CA.