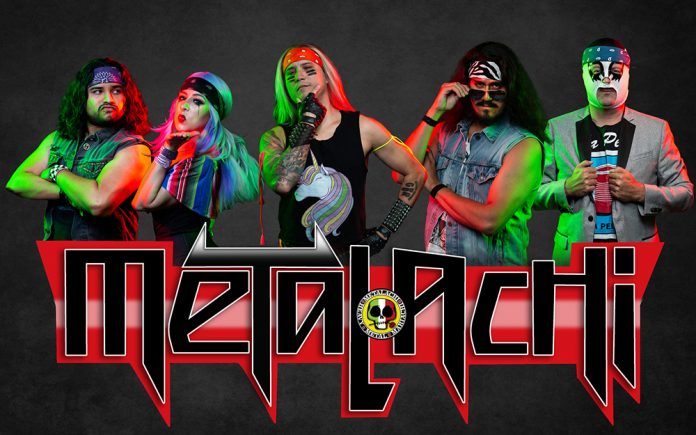 Once upon a time there was a group of guys in East LA who were classically trained Mariachis. At some point, someone came up with the idea of performing Ozzy Osbourne’s, “Iron Man” mariachi style for funsies and to all of our benefit, they conceived a fused up music baby they appropriately named, Metalachi which; as far as I’m concerned, might be the most So-Cal thing that has ever happened. Along the way, they adopted some mysteriously entertaining personas along with the lovely and dynamic violinist, Queen Kyla Vera who on her own, is a force to be reckoned with. 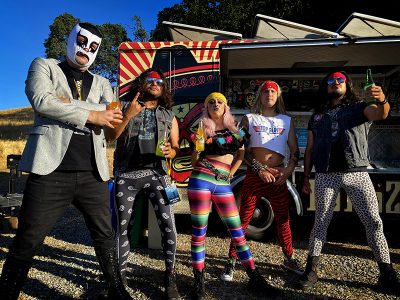 Over the past decade or so, Metalachi has recorded multiple albums and spent the bulk of their time touring throughout the Southwest and beyond. It’s already obvious that they are not your typical cover band. Metalachi infuses their stage shows with comedic skits and pageantry that pushes the level of pure entertainment to impressive heights so, considering the fact that we have the opportunity to rock out with them for the price of a ticket to the fair…I highly recommend to one and all that you show up next Saturday because you will not be disappointed.

The band features Vega De La Rockha on vocals, Diablo Huero on trumpet, Kiko Cane on guitarron, Paco Halen on guitar and Queen Kyla on violin who I was lucky enough to chat with for this article.

CVW: “Kyla, you were somewhat of a later addition to the band. Were you previously a fan?”

Queen Kyla: “Oh, for sure! The band was started well over a decade ago. It was just kind of a conglomeration of different ideas. I guess they were all drinking one night and were joking around like, ‘How cool would it be to mix these styles together and see what happens?’ The result of that became very popular very quickly. I myself joined the band in 2015 so it’s been a while.”

CVW: “It’s not every day that most people meet someone who is a skilled violinist. How did you get into music in the first place?” 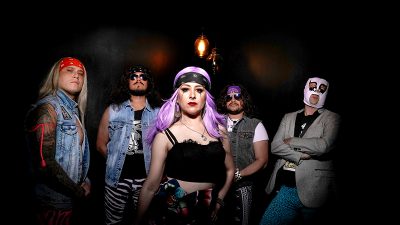 Queen Kyla: “My dad was a professional musician for a long time. As long as I can remember, I always loved music and knew I wanted to play violin. I told my parents that I wanted to learn the violin and they were definitely hesitant. They compromised with me by telling me that if I learned piano first, then they would get me a violin. So, I was like…in pre-school and learned piano, went back to my parents and said, “Okay, I learned piano. Can I have a violin now?”

CVW: “Wait, you were a preschooler that was asking to learn violin?”

Queen Kyla: “Yeah, a lot of kids start violin at like, 2 or 3 years old and I started at 6 so in that sense, I was late compared to everyone else but I always knew that was what I wanted to do. I didn’t know how, I just knew that I wanted to learn everything that I could about every style in this craft and I learned a few. There are so many. The adventure is so great and being able to work in so many areas, especially with a project like this that is so freaking weird…You just never imagine you are going to end up doing mariachi style music with a heavy metal cover band.”

CVW: “I was wondering whether or not, with all of your childhood aspirations of becoming a professional violinist, you planned on performing classical music or if you ever possibly conceived of doing something so alternative with your skills?”

Queen Kyla: “Oh, no. I never wanted to be a classical musician. I did study it at first but it was boring. I always knew I was going to do something weird and unique. I had been following Metalachi for a long time and had gone to a couple of shows. It was all something I was very familiar with so I just basically told them that they were going to hire me.”

CVW: “There is a ton that I can say about that type of confidence. And of course, I found out while contacting you for this interview that you pretty much run business for the band which is admirable and not always easy. I have some personal perspective having to do with being the one chick in a band full of dudes so I am particularly interested in whether or not you ever feel like the mama of the group?” 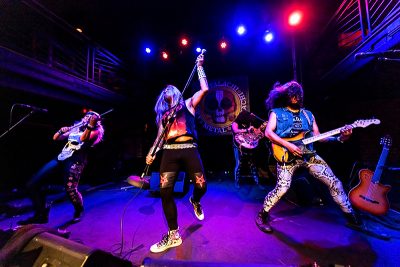 Queen Kyla: “Yeah, there are definitely times when I just let loose but, for the most part I’m the one going, ‘Hey, I need you to move these boxes,’ or, ‘I need you to go give them the stage plot setups’ or, ‘Someone help me count this money,’ or ‘Make sure you get sleep and show up 2 hours early.’” All of that kind of stuff. There’s so much detail in the schedule. And if we’re on the road it’s keeping up with the call times for every single day, how many miles we have to drive….I try to give any and all information that we can possibly need which…(QK scoffs) they really ignore most of the time but, I do what I can to make sure that we are keeping everything running as smoothly as possible.”

You can check out all things Metalachi on all major platforms but I would particularly recommend you peeping their videos on YouTube ASAP. See you next Saturday!