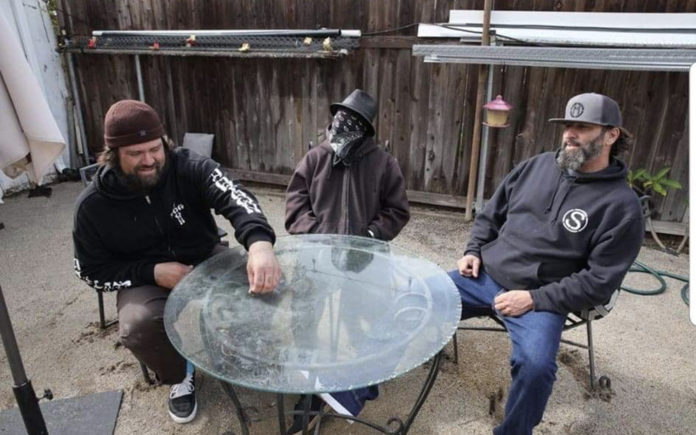 Performing at The World Famous Red Barn Friday, September 13 with WAXY and AVON

The music of MEZZOA was a millennium in the making. No kidding, it took millions of light years to be written and recorded. The hard rocking power trio consists of former members of Magdalene, Super Sonic Dragon Wagon, Gunfighter and G13. They will be performing at Red Barn in Palm Desert, CA on Friday, September 13th with WAXY and AVON and again with the same artists on Saturday at Cobraside Distribution in Glendale, CA.

The ‘not of this world’ San Diego Stoner Rock triad includes unearthly members Ignacio “El Falcone” “Nacho” Maldonado on guitar and vocals who was created in the ‘Milky Way’, Scott “Eeeeeaaah” Hoover, Arturo Ulloa and Paul Valle sharing drum duties were created in a ‘Gaseous Oort Cloud’ and ‘Q’ “Dust Devil” Pena on bass created in the ‘Cholo Goth Universe’.

To sink your ears into this groovy, riff-heavy, gnarly, thunder belly of 70’s style rock is to experience the elements of Stoner Rock to Power Punk. MEZZOA brings home some bulky and bluesy Rock ‘n’ Roll.

MEZZOA is the idea of playing music that hits home. Personal situations and life events are played out in lyrical and musical ceremony through their resonance. This is the music they love, created with mutually respected musicians. The line-up is comprised of brothers who grew up together listening to different styles of music. Influenced by Black Sabbath, Led Zeppelin, The Beatles, Robert Johnson, The Sex Pistols, KISS, KYUSS and Alice In Chains, MEZZOA is currently finishing up the follow-up album to their astonishing debut on El Falcone Records, Astral Travel (2017). The new work is currently untitled, and they are taking suggestions. My recommendation…How the Hell Will You Top the First Album?

MEZZOA was previously hand-picked to be part of a Vegas Rock Revolution showcase featuring Sasquatch and AVON. They have also shared the stage with Brant Bjork, Duel, Cloud Catcher, Red Wizard, The Rare Breed and Void Vator to name a few.

Coachella Valley Weekly briefly spoke with Maldonado about the band, their new music and upcoming shows.

CVW: Tell us about your fellow band members?

Maldonado: “‘Q’ is originally from Arizona. He’s been in Dago for the last 30 years. We met in a previous band called G13. We have a revolving drummer situation. Our tour drummer is Paul. His home base is Arizona. He’s also the front man and guitarist for King Chiefs and he’s played drums for Serial Hawk. We also have San Diegans Arturo and Scott sharing drum duties. Scott will be playing with us at the Red Barn gig.”

Maldonado: “We’re stoked to be playing with WAXY and our buddies in AVON again. We met them in Las Vegas last year opening for Sasquatch. They’re a good bunch of dudes with great tunes.”

CVW: What can you tell us about the new album?

Maldonado: “We’re currently recording new music at Doubletime Recording Studio in El Cajon, CA. We had a few songs left over from the Astral Travel sessions, so we’re taking a few of those choice cuts and putting them alongside some of these new tunes. If it all works out, we should have something ready by spring 2020.”

CVW: Your first album Astral Travel is killer! The songs “Mezzoa,” “Song of the Sun” and “Shoplifters of the World Unite,” knocked me out. What was your favorite part of making that record?

Maldonado: “My favorite part of the recording process was challenging myself to play all the instruments. I wanted to see if I could pull it off. I’m proud of it. The writing is mostly biographical; stuff I’ve lived. It was a long process of writing, recording, packaging, artwork etc. It was a casual experience. I didn’t want to put any stress on myself, so I took my time.”

CVW: You’re based in San Diego. What’s the music scene like there?

Maldonado: “I was born and raised in San Diego and I love our music scene. There’s lots of cool bands. Everyone supports each other. It’s a bitchin’ vibe in right now. We have bands like Red Wizard, Supersonic Dragon Wagon, Graveyard Witch, Nebula Drag and PSYLOW.”

You can stream Astral Plane on Spotify and Jango or purchase the album on iTunes, Amazon and Google Play.

Their video for Song of the Sun is part cosmic, part performance and features the multi-talents of the accomplished Maldonado.

Watch the Official Video for Song of the Sun