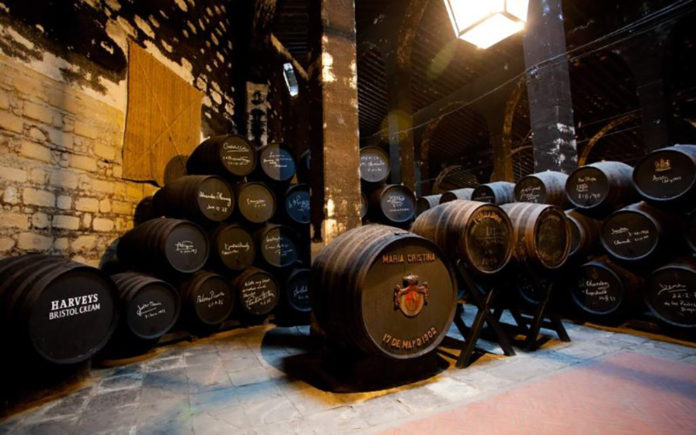 Perhaps the most misunderstood wine in town is Sherry. The “real” stuff is produced in the south of Spain and comes in far more different styles than the average wine drinker realizes. Problem is: your “average” vino lover probably doesn’t have even one bottle on the shelf and they’re not rushing to remedy or rectify that situation. ♫ “Oh Sherry . . . Sherry baby” ♫

Oftentimes, Sherry, Madeira, and Port are lumped together into some type of dessert wine category. And these wines do indeed provide some astonishing sweet treats! As a collector of Vintage Port and Madeira back in the day, I was quick to discern the different qualities of the three SMPs—learning especially the various types of Sherry out on the market, from the very light & dry fino, to the Sherry Cream dessert type. We’ll discuss these distinctions a bit later.

But even I was out of the loop a year or so ago, when I tasted through a collection of Sherries. At the tasting, Ricco Gallardo, one of our valley’s wine wise guys, represents Authentic Wines Selections, out of Berkeley Cal. AWS has a domestic and international wine portfolio that is one of the best. 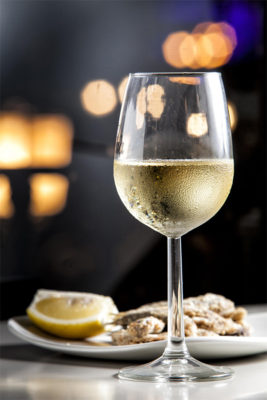 The venue for the tasting was held at Italian-chic restaurant, Il Corso, there on El Paseo in Palm Desert. Enjoying the good life of wine and relaxation, Ricco opened a bottle of Leyendo fino Sherry to sample. Honestly, I hadn’t enjoyed a fino in some time; I usually will pick up a bottle of a sweeter sherry around winter holidays. The chilled fino appeared refreshing and inviting with is cool faint green white color—like a Sauvignon Blanc.

And expecting a Sauv Blanc type flavor profile was a big mistake. Okay—maybe it had a light-bodied touch, but the fino came out of left field. It was like a surprise assault on my California senses: Bone dry, salty, pungent, savory, musky, nutty—geez!—if I hadn’t seen Ricco uncork the bottle, I would have thought someone had left it open in the ocean and it had just floated back in.

But mea culpa—my bad: for the true fino connoisseur, it was an excellent bottle! I had to volunteer myself to the back of the wine classroom. I needed to take Sherry Wine 101 over again. How embarrassing: a wine columnist failing to discern the umami-contextual flavor of a fine bottle of fino sherry.

Of course I’ve recovered from all that and am doing just ducky, thank you. But I’m here to save you readers from that awkward moment of prejudging; and, onto an appearance and position of a knowledgeable and lovable wine snob! Further, you may well be the hit of your neighborhood when you properly introduce the chilled refreshing finos to all your friends partying in the heat of the desert.

Sherry is made primarily from the Palomino grape. The winemaking techniques are complicated, unique and traditional. Sherry is a fortified wine, meaning neutral spirits are added to the wine after fermentation to add to the alcohol content usually to 15%

Most of you wine enthusiasts have heard of the sherry solera aging system , whereby newer wines are gradually mixed with older wines to produce a sherry encompassing many different vintages to create a consistent style, very similar to the method used to produce non-vintage Champagne styles.

Pretty much any article or story on Sherry wine always shows a picture of a group of stacked barrels left out in the sun where they blend the top tier after older wine has been transferred down to the next, and so on, with blended wine from the bottom tier withdrawn for bottling. 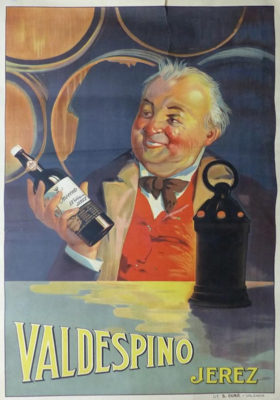 A Fino Sherry is the lightest style that is famously produced in the Spanish Jerez [Hereth] de la Frontera region. Its aging, from around three to six years, takes place entirely under layers of natural forming yeasts, known as flor, shielding the wine from oxidation;. This flor shapes the fino in every manner, from its delicate texture to its pungent aromas and flavors alongside its austere dryness.

Other styles of sherry that you’ll see on the labels are Manzanilla, which is made in the fino style, but the location of the bodegas, near the sea, give it a distinctive regional character, with bright sea salt and citrus notes.

Amontillado also starts off as a fino, but after five or six years, the flor dies and is filtered out. The wine then continues aging oxidatively. This style picks up notes of walnut, bitter almond and dried orange and is generally bottled at 16 percent to 20 percent alcohol. Oloroso is another great style of sherry that comes both dry and sweet and picks up dark colors and rich flavors from its own style of oxidation

The sweeter sherries are made from the Pedro Ximénez grape. We’ll get to those later in the year around the holidays, when the wines are best enjoyed.

But let’s get back to the fino. It’s an entrancing and intriguing wine that at first may bewilder, but perhaps will be your next best bud to get you through the hot desert days. Currently I’m enjoying the Williams & Humbert’s Pando Fino Jerez at around $15. Wine Spectator recently gave it 89 points stating, “Open-knit and refreshing, with lemon pith, talc and bitter almond notes streaking through, ending with a bone-dry, taut finish. Drink now.”