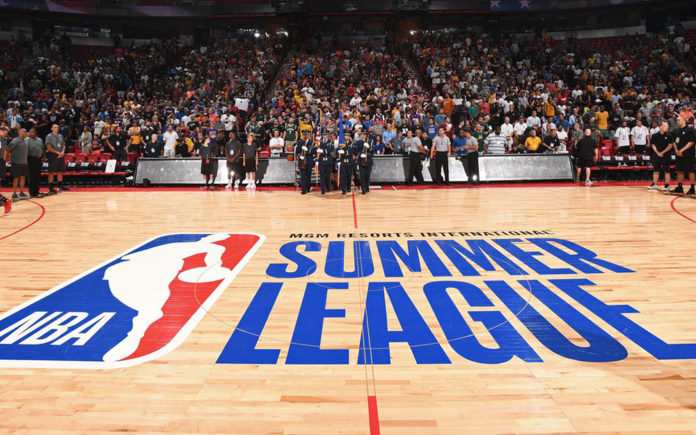 What a time to be alive for basketball fans. Shortly after the season ends, the NBA Draft will lead into one of the best basketball events of the year in Las Vegas.

The 14th annual NBA Summer League will take place from July 6-17 at the Thomas & Mack Center and Cox Pavilion on the campus of UNLV. Players are mostly new draft picks and young players on the cusp of potentially becoming stars. This is a special year for the Summer League since it will be the first time that every NBA team participates. In previous years, Las Vegas would miss out on some high draft picks and players because their team didn’t participate in Las Vegas. That shouldn’t be a problem this year.

Fans love the ability to see the brightest future stars up close and personal in the NBA Summer League games. Most seating for the games is general admission so it’s possible to sit just a few rows away from some of the most amazing athletes in the world.

The Summer League is one of the best entertainment deals in Las Vegas. Fans can watch a full day of games by purchasing general admission tickets for $35 or less ($25 for children and seniors). The GA seats allow ticket holders to walk back and forth between two games that might be happening at the same time. If you’re from a large city you might not be able to afford seats so close to the action.

Bettors like the NBA Summer League because it’s another ten days to bet on basketball in Las Vegas. The rest of the country is still waiting to watch live games while they have potentially legal gambling action. That’s something Coachella Valley residents may see in the near future with the recent decision by the feds to make sports gaming not illegal on the federal level. While the degenerate in all of us can find an excuse to gamble on anything, until California makes sports gaming legal, this is mostly an event for fans of the game.

Since every team is participating in the NBA Summer League this year the schedule will expand to 12 days and 82 games. The league will continue to use its tournament-style schedule. Teams will compete in three preliminary games before being seeded in a tournament. Each team will play at least five games and as many as eight. The league will have a meaningless but fun Championship Game on July 17.

NBA Summer League Beyond The Court

It’s fun to watch the NBA Summer League games in person and even on TV. However, this is Las Vegas and there’s more than just the young players and the games at UNLV. These 10 days in Las Vegas almost serve as a summer meeting for the entire league. You’ll find current and previous NBA stars along with coaches, GM’s and other NBA team staff all over Las Vegas.

Not that anyone wants to be a stalker, but it’s fun to happen upon NBA greats while wandering around the casinos in Las Vegas. MGM Resorts International is the sponsor of the NBA Summer League so you might find some of the NBA folks eating, drinking and gambling at some of their properties on the Vegas Strip.

MGM Grand is the closest MGM Resorts casino to UNLV so there’s a chance someone might stay there. Aria and Mandalay Bay might be other casino-resorts some of the NBAers stay and hang out. Don’t be surprised if a few players make a trip to Luxor to play video games at the new esports arena.

It’s not every day that a former player like Charles Barkley sits down next to you at the blackjack table. Ahhhh…now wouldn’t that be fun?