“Well, I can’t stop workin’ cause I like to work when nothin’ else is going on/Well, it’s bad for the body but it’s good for the soul-might even keep you breathin’ when you lose control.” That’s Neil Young on “Can’t Stop (Workin’),” from his new album, Peace Trail.

Neil Young has been a working musician for more than half a century, yet he shows no signs of slowing down. Born in Toronto, Ontario, in 1945, and raised mostly in Winnipeg, Manitoba, his interest in Rock N Roll escalated as his parents’ marriage came apart at the seams.

After the divorce, his older brother, Bob, returned to Toronto with their father, Scott, who was a well-known sportswriter. Neil remained with his mother and immersed himself in the nascent sounds of Rock music. Rockabilly, Doo-Wop, R&B and Country flowed from his tiny transistor radio. Pretty soon he picked up a plastic ukulele, then a banjo ukulele and finally a baritone ukulele; pretty much everything but an actual guitar.

During his high school years, Neil cycled through a series of bands. The Jades and the Squires had the most longevity. Eschewing a college education, he went out on his own, armed with only his trusty acoustic guitar. He began making a name for himself, working his way through the Canadian coffee house/Folk club circuit. (It was there he first crossed paths with another aspiring singer-songwriter, Joni Mitchell).

By the time he was 21, Neil was playing with future Super-Freak, Funk-meister Rick James in the Mynah Birds. The combo was even signed with Motown until it was discovered that James had been AWOL from the Army Reserve.

The quintet immediately signed with Atlantic Records. Playing clubs on the Sunset Strip they quickly distinguished themselves with a sound that combined Rock, Blues, Country and Psychedelic influences. From 1966-1968, they released three well-received and fairly popular records, but clashing egos almost guaranteed the band’s swift implosion. By late ’68, Neil embarked on a solo career.

His self-titled debut arrived in January, 1969. Less than four months later, he released his second effort, Everybody Knows This Is Nowhere. At this point, he drafted a young four-piece called the Rockets as his backing band. Soon they became better known as Crazy Horse. (All told, Neil has made 16 records with Crazy Horse).

In the midst of launching his solo career, ever unpredictable, he reconnected with Stephen Stills who was now part of the Rock world’s first super-group, Crosby, Stills & Nash. Their self-titled debut was already riding high on the charts, when they added Neil to their line-up. The day after their very first live performance, they headed to Woodstock, to play at that epochal event. Less than a year later, the album Déjà vu, was credited to Crosby, Stills, Nash & Young. Another chart-topper, it spawned three hit singles.

A restless spirit, Neil remained tangentially tethered to CSNY, but truly began nurturing his solo career. His After The Gold Rush album arrived in 1970 and two years later he hit his commercial apex with the Harvest album, which featured his only #1 single, “Heart Of Gold.”

Rather than embrace his success, Neil almost willfully ran in the other direction. Dense and sorrowful records like On The Beach and Tonight’s The Night confounded expectations. It was a template he would employ for the rest of his career.

By the end of the “me decade,” he hit another milestone with his Rust Never Sleeps album and tour. Rather than staying that course, Neil zigged where he might have zagged. During the ‘80s, he settled into his most non-commercial phase, recording a series of albums that explored Electronica, Rockabilly, Honky Tonk Country and Rhythm & Blues. Geffen Records (his label at the time), actually sued him for not sounding enough like Neil Young.

Ironically, as the ‘90s dawned, Post-Punk tastemakers like Sonic Youth, Pixies, Dinosaur, Jr., Nick Cave and Pearl Jam began name-checking Neil Young as an influence. Suddenly, he was known as the “Godfather Of Grunge.” Naturally, he switched gears yet again, by revisited his mellow “Harvest” years by recording a follow-up, Harvest Moon with the same guys, Ben Keith, Tim Drummond and Kenny Buttrey, (dubbed the Gators), that played on the original album 20 years before. It was a critical and commercial success.

For the last 25 years Neil has remained autonomous. Releasing albums and touring whenever it pleased him. He Grunged it up on albums like Sleeps With Angels and Mirrorball, crafted beautiful acoustic efforts like Silver & Gold and Prairie Wind. He made a convoluted concept album, Greendale, and paid homage to songwriting antecedents like Stephen Foster on Americana. Collaborations that seemed good on paper, like the Are You Passionate album with Booker T. & The MGs and Le Noise with producer Daniel Lanois fell flat.

Consistently outspoken, he’s tackled topics like 9/11 and the Iraq War. His 2006 record, Living With War was a tart excoriation of George W. Bush’s rush to judgement and the absence of Weapons Of Mass Destruction. Something of an Eco-Warrior, he even entitled an album The Monsanto Years, as a not-so-subtle critique of the monolithic agrochemical company.

Wildly prolific, Neil has recorded 41 studio albums. In October, he was one of the headliners for Desert Trip in Indio. The six day music fest, spread over two weekends (dubbed “Oldchella”) featured British Invasion stalwarts like Rolling Stones and The Who, as well as Pink Floyd mastermind Roger Waters, archetypal singer-songwriter (and Nobel Prize winner), Bob Dylan and Beatles’ co-architect, Paul McCartney. 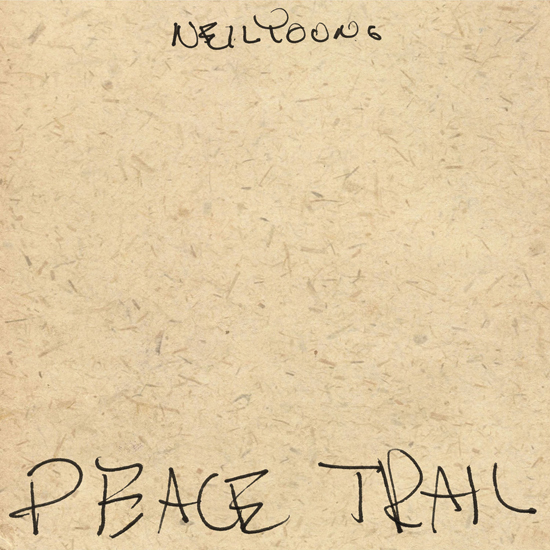 On the heels of that historic event, he has released his 42nd album, Peace Trail. Rather than use past backing bands like Crazy Horse, or the Gators, or even Promise Of The Real (an up-and-coming band that includes Willie Nelson’s sons, Micah and Lukas, who played on Monsanto Years and toured with him), Neil enlisted two session pros, drummer Jim Keltner and bassist Paul Bushnell.

Jim Keltner has played with three out of four Beatles, James Taylor, Steely Dan, Traveling Wilburys, Elvis Costello and Warren Zevon, just to name a few. Meanwhile, Paul Bushnell is very much bassist’s bassist, working with a variety of disparate artists: everyone from Luciano Pavarotti and Sinead O’Connor to LL Cool J. and a shit ton of Top 10 Country musicians.

The record opens tentatively with the title track. The lengthy instrumental intro is powered by a sturdy rhythm; walking bass lines quavery keys and skronky guitar. It’s a full minute before Neil’s feathery falsetto (nearly unchanged since the ‘60s), drops in. The lyrics make a case for continuing to make music and remaining socially conscious. Sunburst guitar riffs underscore sentiments like “Don’t think I’ll cash it in yet, don’t think I’ll put in my last bet…I think I’ll hit the peace trail, I think I like my chances now/I have to take good care, ‘cause something new is growing.”

The first half of “Peace Trail” is great. The stellar title song is followed by the aforementioned “Can’t Stop (Workin’).” Over a scattered shuffle-rhythm, roiling bass, scratchy guitar and bluesy, almost fractious harp notes, Neil waxes rhapsodic about his protean work ethic. He periodically repeats the title like a mantra, as though just echoing words give him strength.

The next two tracks, “Indian Givers” and “Show Me” make explicit that Neil stands with the Standing Rock protest, (a.k.a. the Dakota Access Pipeline protests.) The pipeline not only constitutes a threat to the region’s clean water, it also violates sacred Indian burial grounds. The Standing Rock Sioux Tribe has peacefully protested construction for most of 2016, but only recently has it gained national attention.

Over a tribal tattoo and loping guitar, the former offers a stinging indictment of the government’s continued rape and pillage of indigenous lands. He ominously intones “Big money goin’ backwards and rippin’ the soil, where graves are scattered and blood is boiled/…yes our brave sons and beautiful daughters, we’re all here together fightin’ poison waters/Standin’ against the evil ways, that’s what we have at the end of days.”

Sweet Spanish acoustic filigrees open the latter track, before locking into a relax-fit 12 bar Blues groove. Smoky, Home-On-The-Range harmonica trills buttress lyrics that not only reference Standing Rock, but also take swipe at the continued inequity of Women’s rights. Lines like “When the women of the world are free to stand up for themselves, and the promises made stop gatherin’ dust on the shelves show me, show me, show me,” received a huge response when he previewed the song at Desert Trip.

So, it’s somewhat dismaying to report after four excellent songs the album kind of goes to shit. Perhaps that’s too harsh an assessment. More accurately, Neil seems to half-ass the remaining six songs.

“Texas Rangers” employs a child-like nursery rhyme melody with lyrics that seem like a repetitive tone poem. On “My Pledge” he sing-speaks a fractured rant that leap-frogs through a series of non sequitur thoughts. From ancestors on the Mayflower, (wait, isn’t he Canadian?), to the frustration of L.A. traffic, to a withering denunciation of millennials that are tethered to their iphones. He then goes on to reference Dion’s “Abraham, Martin And John” song along with the death of Buddy Holly. Labelling this song a mess is a bit of an understatement. More apropos is the Yiddish word mishegoss.

At least “Terrorist Suicide Hang Gliders” and “John Oaks” attempt more linear stories. Over a “Hey-Hey, My-My” melody (Neil steals from the best, himself), hearth-fire acoustic guitar, a plonking back-beat and shards of splattery harmonica, “Terrorist..” takes aim at the casual bigotry and rampant jingoism that has gripped this country since 9/11. “I think I know who to blame, it’s all the people with funny names/Movin’ into our neighborhood, how can I tell if they’re bad or good.”

“John Oaks” offers a thumbnail sketch of a laid back hippie who becomes an agriculture activist. A cross between Jeff Lebowski (the Dude abides), and Caesar Chavez, he leads a farm worker rebellion and dies a martyr. The plodding melody is almost saved by wheezy harmonica and a blistering electric guitar solo.

The final two tracks can barely be considered songs. Maybe there is a trenchant metaphor to be found in the lyrics of “Glass Accident,” but it really sounds as though Neil dropped his beverage and was too lazy to clean it up, so he left a note around the dangerous debris.

Finally, “My New Robot” is about exactly that. “My life has been so lucky, the packages arrived/I got my new robot from amazon.com” The remainder of the song is devoted to robotic instructions for activating the robot. It’s the musical equivalent of being trapped in a dullsville conversation with a septuagenarian regarding gas mileage.

Peace Trail is, at best, hit and miss. It’s admirable that Neil Young has such a rigorous work-ethic, but no one begrudges him a little time off. Maybe he should relax and play with his robot for a while.