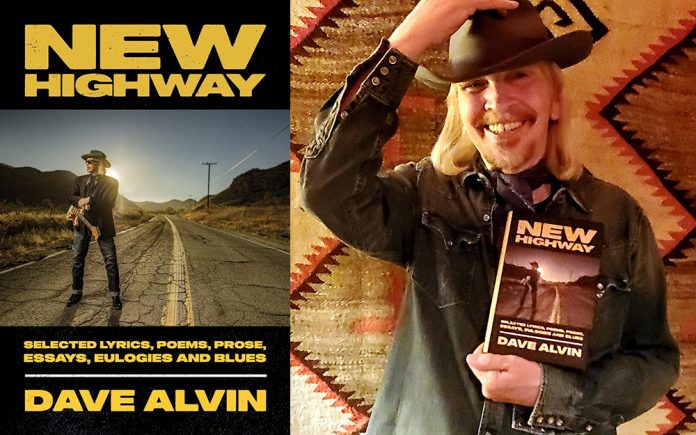 Dave Alvin isn’t just a superlative musician and songwriter, he’s also a sagacious writer and a wickedly witty raconteur. His latest book, New Highway, is a testament to his protean talents.

Dave began earning his keep as a musician over 40 years ago. First, as lead guitarist and primary songwriter for The Blasters, a supercharged Roots Rock combo that also included lead singer and older brother Phil. After a brief stint with X, Dave went solo and hasn’t looked back. In the ensuing 35 years he’s released 13 solo albums. He also made time to collaborate with his brother Phil on a couple of Bluesy records, as well as recent effort with legendary Texas troubadour, Jimmie Dale Gilmore.

His first book, Any Rough Times Are Behind You: Selected Poems and Writings, 1979-1995, arrived in 1996. The new one follows a similar blueprint. It also includes Selected Poems, Prose, Essays, Eulogies And Blues.

The book is packed with poems both pithy and poignant, indelible Blasters lyrics like “American Music,” “Long White Cadillac” and “Little Honey,” as well as solo classics like “King Of California,” “Manzanita” and “Billy The Kid And Geronimo.” But this self-described Guitar-Basher is at his best when he’s revealing a part of himself or paying reverent, sometimes raucous homage to heroes and friends.

He saves his tenderest encomiums for singer-songwriter Nanci Griffith, an artist who consistently blurred the lines between Country, Folk and Rock, as well as Miss Mercy, who, along with best friend, Pamela Des Barres, was part of Frank Zappa’s Girls Together Outrageously collective. Nanci and Miss Mercy both marched to the beat of a differentdrummer. Then there’s best pal, musician Chris Gaffney, who lost his battle with liver cancer at age 57 back in 2008. Dave includes a cantankerous exchange between the venerable road warriors that will have you guffawing with gusto. (It’s better than LOLing, trust me). The lyrics to Run Conejo Run, a song that limns some of Chris’ life experience, is a cinematic read.

The true measure of great writing is how immediately it affects you once you close the book. Reading Moses On Mount Sinai… One Night In Italy, made me search out a copy of Terry Allen’s Juarez album via the interwebs. Dave’s liner notes to Tulare Dust: A Songwriter’s Tribute To Merle Haggard, had me digging out my CD (purchased in 1994), as well as some of my Merle LPs. His interview with Buck Owens made me wish I’d spent time at The Crystal Palace, the few times in my life I was in Bakersfield.

Dave’s musical knowledge is encyclopedic, his native California pride knows no bounds and his facility for language is as deft and economical as his music. There’s a lived-in authenticity to this collection that is by turns, funny, ornery, prickly and poignant.