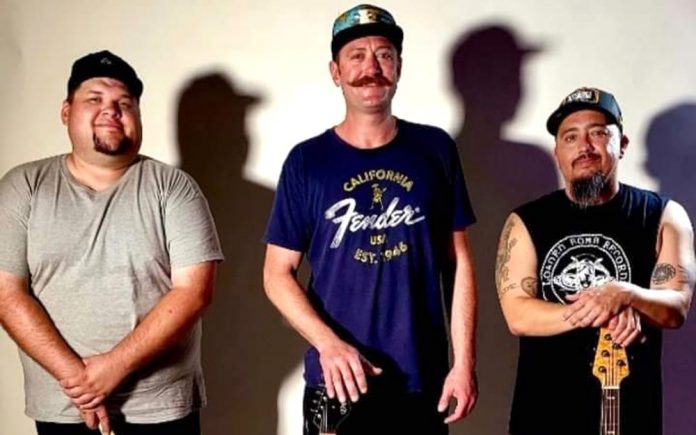 The last 2 ½ years since the Covid lockdown, inevitably has been a relentless challenge for artists worldwide. Lack of band rehearsals and zero social interaction, deeply alters motives of artists, reevaluating or repurposing their music projects. As the world continues to conquer the viral battle, music begins to thrive again with freshest sounds from musicians and artists who have been taking advantage of the time to create, construct, and reinvent themselves through new musical projects. Brian Parnell, owner of Audiowild Studios, happens to acknowledge this shift, and decided it was time to present California’s newest emerging reggae band – tHE iLL eAGLES.

Audiowild organized a special debut and EP Release party Friday, September 10th. Concert attendees gathered around the intimate studio located in the heart of the peaceful mountainous downtown Idyllwild area. The weather was just perfect with the right amount of chill and close friends who have attended Audiowild’s previous events. As the audience gathered around the colorful led-lit stage, Chris Tracy, a local roots reggae acoustic performer, awed his listeners with his original songs from his EP list, setting the relaxing mood. In between sets, Brian Parnell shows off a bit of his talent with his identifiable smoky-grunge vocals to acoustic covers of his band, Throw the Goat, along with other popular hit cover songs. After Parnell’s set and with some witty, light engagement with his viewers, he proudly introduced his close friends and highlighted band – tHE iLL eAGLES. The audience cheered as the trio arrived on stage, anticipating the unique reggae sound the band members teased about during their announcement of their reggae project.

tHE iLL eAGLES astonished their listeners, amazed them by their haunting vocals and poetic lyrics. The music crafted by them formed an energetic connection with their audience, offering them such a sensational and vibrate performance. The viewers listen intently, following with dancing with the skillful, yet colorful trio. This was the night that tHE iLL eAGLES were successfully claimed its place among Idyllwild’s and Coachella Valley’s music scene.

tHE iLL eAGLES were formed in Coachella Valley by singer/guitarist Brad Burton, bassist Spade Ferrer, and drummer/percussionist Ryan Diaz. The band has been together for about a year now as a trio, combining their unique musical abilities crafting their sound. Backed by years of talented experiences with other bands, the trio strongly believes tHE iLL eAGLES is the sound California craves.

On Your EP, which song would you say reflects the identity of tHE iLL eAGLES?

Brad: “I think ‘Turn It Down’ would be the song. I personally feel like it’s the best song I ever performed (as iLL eAGLES) in the studio. As far as feeling and emotion. *chuckles* My wife actually kinda wrote it! I was writing songs and peeled my head in the window, and she was talking to the kids, telling them to ‘turn it down’- meaning the T.V.”

Spencer: “If anyone wants to hear just one song from us, that would be it. During the process of writing ‘Turn It Down’, it became so natural between us three, that it was one of the easiest songs to write because it just flowed.”

Ryan: “It just clicked, and that’s when we knew it would be a great song.”

How did you guys come up with the band’s name?

Brad: “I was going to do a side project with a friend of mine who happens to be a rapper, and that was the name that I came up with. I just thought it sounded cool! The project never panned out, so I started the band with the name.”

What makes tHE iLL eAGLES unique among other desert reggae rock sounds?

Spencer: “What makes us standout is Brad’s vocals. When you listen to a lot of reggae music, you don’t hear those types of vocals at all. And I think this will draw people in.

Ryan: “Besides, Brad’s songwriting is incredible. And is different from other reggae groups that talk a lot about smoking weed and politics. We sing about real positivity like family, love, and skateboarding. We want to spread the love.

The band later expressed their ambitions of furthering their distinctive music project with high intentions of someday, opening up for other well-known groups such as Pepper, and 311. tHE iLL eAGLES have made its desired impression, gaining new fans. To experience tHE iLL eAGLES, follow them on Instagram or Facebook for upcoming shows such as followed: