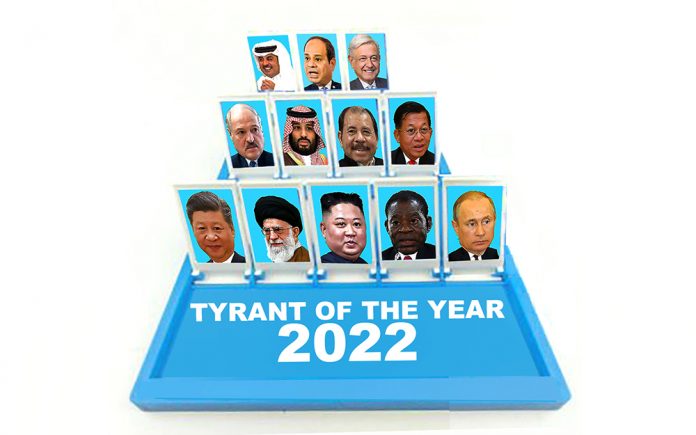 From the Korea Times:  North Korean leader Kim Jong-un was nominated for “Tyrant of the Year” by Index On Censorship, a U.K. nonprofit.  North Korea comes in last among Reporters Without Borders on press freedoms.  Other nominees for Tyrant of the Year include Putin of Russia, Al Thani of Qatar, Xi Jinping of China, Obrador of Mexico, Daniel Nortega of Nicaragua, Fattah el-Sisi of Egypt, bin Salman of Saudi Arabia, Ali Khamenei of Iran, Hlaing of Myanmar, Lukashenka of Belarus and Mbasogo of Equadorial Guinea.  Last year’s winner was Turkish President Erdogan.

From the BBC: The largest radio telescope in the world began construction on December 5th.  The intent of the facility will be to address some of the biggest questions in astrophysics.    The Square Kilometre Array (SKA) will do things like testing Einstein’s theories or hunting for extra-terrestrials.  It is expected to detect the faintest of radio signals from areas of the cosmos that emitted sounds only a few hundred million years after the Big Bang.  It is expected that they will be able to trace the full history of hydrogen which first was in cloud forms before forming stars.  The telescope will be built in a remote part of Western Australia as well as South Africa’s Northern Cape.  At a price tag of $2 billion, the project is funded by South Africa, Australia, the United Kingdom, Italy, Netherlands, Portugal, Switzerland and China.  France, Spain and German are expected to join soon while a number of other countries are considering participation.

Newsline Queensland, Australia:  Former lawyer Adrian Praljak sued the Queensland Government for $50 billion.  Why?  Praljak felt that they forced him to plead guilty on stalking charges brought against him in 2018.  The court’s ruling found the Praljak’s claim was abuse of justice and ordered him to pay for court costs.

A headline from the Iceland Monitor reads “Hot lava is flowing in Reykjavik for the first time in 5,000 years.”  As the city has no volcanoes, has global warming screwed up the world this much?  Nope. Julius Jonsson and Ragnur Agustdottir started the Lava Show.  For only $40 dollars for adults and half that for kids, you can see real lava flowing in a safe way.  With the help of a special furnace, this couple has expanded from its Vik location opened four years ago to Reykjavik where you can see hot lava up close.

Newsline New Delhi, India: Imam Mufti Siddiqui said that Islam does not allow for women to participate in politics.  Siddiqui said that women would not be allowed to visit mosques if they participated.  This proclamation is part of a larger problem in the area.  Since the 1990s, Kashmiri Pandits have been persecuted by radical Islamicists.  On January 19, 1990, mosques declared that Pandit males needed to leave the region and families, convert to Islam, or be killed.  Roughly 400 Pandits have been killed with another 800,000 leaving the region.  At present, roughly 3,400 Pandits remain in the region.

Newsline South Sudan: President Kiir announced that he is sending 750 troops to the Democratic Republic of Congo as part of an Eastern African alliance of countries looking to restore peace in the region.  Uganda has contributed 1,000 troops and Kenya 900 as the region tries to restore order.  There are approximately 120 armed groups roaming the region.  While peace talks are underway, rebel group M23 have been deemed terrorists and precluded from discussions.  This region has been a source of desperate poverty and political instability for decades.  It is hoped that a seven-country group can help the Congolese to find stability.  The area is one of the poorest on Earth.