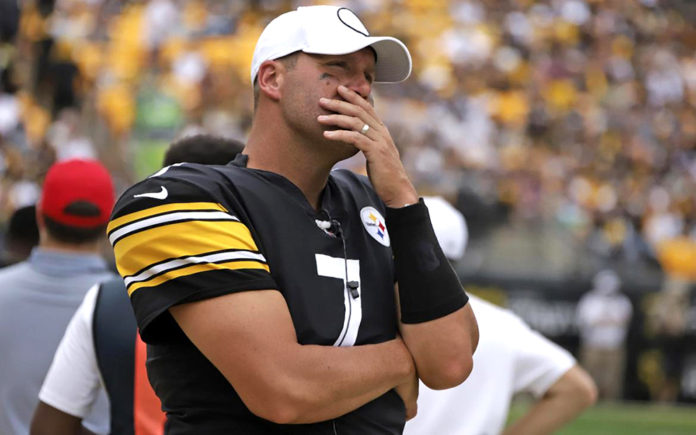 Just three short weeks into the NFL season, the landscape of the league has completely changed due to a slew of quarterback injuries. Both perennial contenders and up-and-coming teams have been bitten by the injury bug at the most important position in the sport, leaving franchises to scramble to form new game plans built around backup quarterbacks and hope they can weather the storm until their starter returns. Below we break down the biggest quarterback injuries from across the league and how their teas are responding to their new reality.

Ben Roethlisberger, Pittsburgh Steelers Injury: Ben Roethlisberger suffered an elbow injury during the Steelers game against the Seahawks in Week 2, requiring surgery that will end his season. Backup status: Mason Rudolph subbed for Roethlisberger on Sunday and played admirably, completing 12 of 19 passes for two scores and one interception. Still, the second-year quarterback out of Washington State will have to get up to speed with the starting role quickly if the Steelers hope to make a run.

What it means for the team: Roethlisberger led the league in passing last year with 5,129 yards. His absence leaves a huge amount of production to be filled, and it’s not clear if Rudolph is up to the task of throwing 40+ times a game. With the AFC North loaded, head coach Mike Tomlin will have to pull off something special if the team is going to bounce back from its 0-2 start.

Drew Brees, New Orleans Saints Injury: Drew Brees was knocked out of the Saints Week 2 matchup against the Rams after defensive tackle Aaron Donald smacked his throwing hand while attempting to block a pass. He’ll have surgery and is estimated to be around six weeks away from game action. Backup status: Teddy Bridgewater got under center for the Saints in Brees’ absence. While he has experience as a starter, Bridgewater wasn’t able to move the ball much against the Saints stout defense. Taysom Hill will likely also get in a few plays at quarterback to provide some variety in the Saints gameplan, but he’s also proved a valuable pass-catcher so far this season. What it means for the team: The Saints were considered one of the favorites to represent the NFC heading into the 2019 season. Should Brees’ recovery go smoothly, they could still be in the running for a playoff spot once he returns. New Orleans will have to weather quite a storm until their starting quarterback is back in action, with games against the Seahawks, Cowboys, and Bears set for the coming weeks.

Nick Foles, Jacksonville Jaguars Injury: Nick Foles suffered a broken left collarbone in his Week 1 debut with the Jacksonville Jaguars just moments after throwing his first touchdown as the team’s starter. He underwent surgery and was placed on the team’s injured reserve list, and will be eligible to return in Week 11 should he be fully recovered. Backup status: Rookie Gardner Minshew took over quarterbacking duties after Foles’ injury and impressed in his debut, completing 22 of 25 passes thrown in the Jaguars Week 1 loss to the Chiefs. He put the team in position to win in Week 2, but a failed two-point conversion sunk Jacksonville to 0-2 to start the year. What it means for the team: Minshew has outplayed expectations through two starts with the team. However, the Jaguars will need to put together something special if they’re going to bounce back from an 0-2 start and still be in a position to contend once Foles returns.

Sam Darnold, New York Jets Injury: Sam Darnold is out for a few weeks dealing with a case of mononucleosis and is hoping to be back by Week 5 when the Jets travel to Philadelphia to take on the Eagles. Backup status: Trevor Siemian was Sam Darnold’s replacement to start the team’s Week 2 matchup against the Cleveland Browns, but suffered a season-ending ankle injury in the first half of the game. Rookie Luke Falk stepped in under center but was unable to mount a comeback in the second half as the team dropped to 0-2 on the season. What it means for the team: The Jets are likely thankful that they have an early bye week this season, as Darnold is only expected to miss one more game before making his return. This Sunday’s trip to New England to play the Patriots likely won’t be pretty, and coming back from 0-3 to make the postseason is undoubtedly a tall order. However, the Jets will at least have their starter running the show.

Andrew Luck, Indianapolis Colts Injury: Just before the start of the season, Andrew Luck announced his shocking decision to retire from the NFL. While the Colts opted to pay out Luck’s entire bonus — a move that seemed to keep the door open for a potential return to the NFL should Luck decide he’s not finished with football for good — it left Indianapolis with a much bleaker outlook on the season than initially expected. Backup status: Jacoby Brissett had already been taking No. 1 reps with the Colts through the preseason, so stepping into the role after Luck’s announcement wasn’t as jarring a transition as it might have been under different circumstances. He’s played well so far, helping Indianapolis to a 1-1 start to the year. What it means for the team: The Colts still have plenty of talent on both sides of the ball, and could very well make a run at the AFC South title should the cards fall right for the team. Still, their status as a potential challenger to the Chiefs and the Patriots at the top of the conference took a tough blow with Luck’s departure. G’Luck!