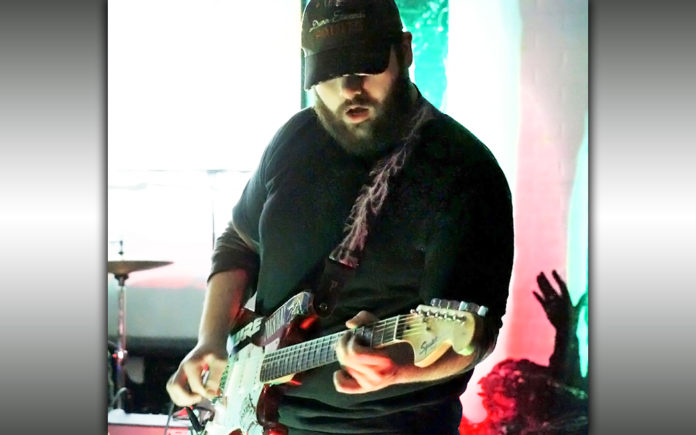 Nick Hales is a beast on the guitar! He currently is playing in 6 different bands/projects that cover several musical genres. He was nominated for Best Guitar Player at the 2018 CV Music Awards where his band Sleazy Cortez performed at the After Party. That band also won one of the 2018 CV Music Showcase preliminary rounds.

Hales was born in Palm Springs and raised in Indio. “I’m definitely a desert rat.”

He says he was about 10 when he started playing on a classical guitar from Spain. “I started to play basic songs like “Iron Man,” Highway to Hell,” etc. Around 8th grade I started taking guitar classes at CDA.”

Aside from playing guitar he also plays bass. “I used to play piano for a couple years, but I didn’t keep it up like I did with the ole guit-fiddle,” shared Hales.

I asked Hales to tell us about the first band he was in.

“It was an alt metal band called Fist Full Of Glass. My best friend Chris King started playing guitar about a month after I did. Franko and Pedro Hernandez were on drums and bass. We we’re together for 6 years, until we did an album and broke up.”

Hales shared a little bit about each of the 6 bands he’s currently in and why each one is important to him.

So what drives him to be in that many bands?

“To put it simply, I just love doing it, although I may be a bit of a band slut,” Hales shared with a chuckle.

If he could only be in one of those bands which one would it be?

Hales said that the most exciting point of his musical career so far has been that the Sleazy album has 40,000 hits on YouTube so far. That’s impressive!

When I asked what type of guitar he plays, he replied laughing, “One that works when I plug it in. I have a couple Ernie ball music man guitars, Gibson Les Paul, Schecter, my first was a Squier Strat and I still play it to this day.”

His influences include: Jimi, SRV, Angus Young, Ed Mundell from Monster Magnet, The Atomic Bitchwax and Johnny Winter.  He’s currently been “stuck on a good blues bender and listening to Stevie Ray Vaughn live albums.”  He most respects, “The independent bands and musicians who make a living crunching it out day by day.”

“Doesn’t matter! I’ll upstage them and get kicked off the tour!”

He says his songwriting process is “usually melody and progression first before any lyrics come. Lyrics are usually last or sometimes a miracle if they come along.”

His goals for 2019 are to record songs with every project he plays in.

His Top 3 headliners for Coachella would be:  “Gary Clark Jr., Lonely Island, Mastodon and for this year’s lineup I would probably go see Aphex Twins and Ty Segall and that’s about it. Stagecoach always have more acts that I end up liking over Coachella. BRING BACK ZZ TOP PLEASE!”

I wouldn’t be surprised to see Nick Hales performing on the Coachella stage with one of his many bands in the near future.