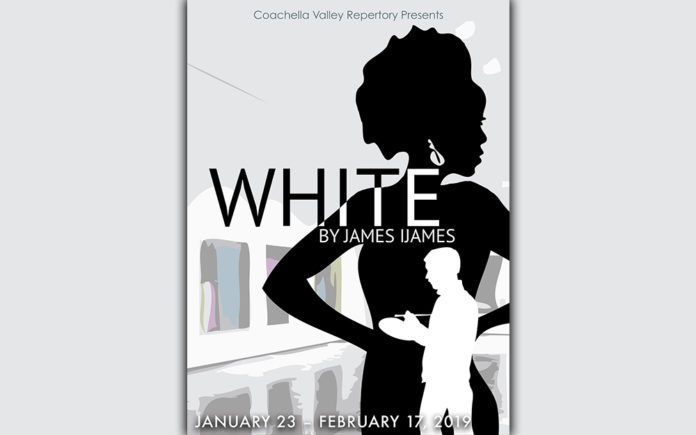 There are few things that I love more than shows that make me think!  Coachella Valley Repertory is synonymous with ‘thinking theatre.’  I have seen a multitude of their productions, most I loved, a few not so much, but not once have I ever left their theatre not thinking about the meaning, significance and essence of the show I just watched.  CV Rep’s 2018/19 season is titled, ‘A Handful of …isms,’ and their current production of James Ijames’ “White,” most certainly hold’s sacred this truth about their mission.

“White,” takes on racism and sexism under the guise of a ‘dark comedy.’   While the humor does serve as an undercurrent in this play, it’s the dark truths that make ‘White,’ a show not to be missed.

At rise we find Jane, the curator of an upscale Art Museum announcing to the audience that the Museum’s next exhibit will “reflect the true range of America,” and not the traditional ‘white dudes’ whose work usually decorates the walls.  This news is not taken well by her old college friend Gus, who happens to be a ‘white dude,’ and whose new work he was hoping to get included in the next exhibit.  “I’m Gay! Doesn’t that count for anything?” Gus exclaims in an effort to find some method of inclusion.  He comes up with a scheme to hire a black actress, Vanessa, to pose as the artist who created his work, in order to prove the political incorrectness of excluding white men.  In his effort to mold Vanessa into Balkonae’ Townsend, his image of a black woman, Vanessa finds her own voice and the shoe Gus is trying to fit on this Cinderella is not fitting.  ‘White,’ has a lot of twists and turns and sharp edges, and will keep you mesmerized until the last startling moment.

Franceli Chapman, as Vanessa/Balkonae’, is a standout in this show.  Her ability to jump between personas is sweet magic and her earnest performance forces the audience to take off blinders when it comes to viewing both the sexism and racism that is a raw reality for black women in American culture.  Paul David Story, as Gus, is not initially a character that inspires empathy in his mission to underhandedly take the opportunity that he believes he is entitled to, though he does have the likeability that gives understanding as to why Gus usually gets his way.  Do white men assume they are automatically entitled to power and control? Or are they sometimes victims of a reverse effort to right the wrongs of racism?  Charlotte Munson as Jane, the Art Director, perfectly portrays the white liberal on steroids and is willing to go to extremes in order to achieve the perfect symbolism.  Anthony Saludares is Tanner, Gus’s Asian boyfriend whose insights teach and support Gus in his slow self-realization process.  There was wonderful chemistry between Saludares and Story. Tanner was the yang to Gus’s yin and provided the solid foundation in the midst of this cast of characters.

Ron Celona does an extraordinary job of keeping the comedy and drama of this piece in perfect balance, with a script that is always weaving and changing direction.

Jimmy Cuomo creates his usual magic with the set design.  Aalsa Lee’s costumes are spot on for these characters, especially in reflecting Vanessa and Balkonae’s changing persona.  Kate Fechtig’s sound and Lynda Shaeps hair/makeup all bring stellar production elements to this show.