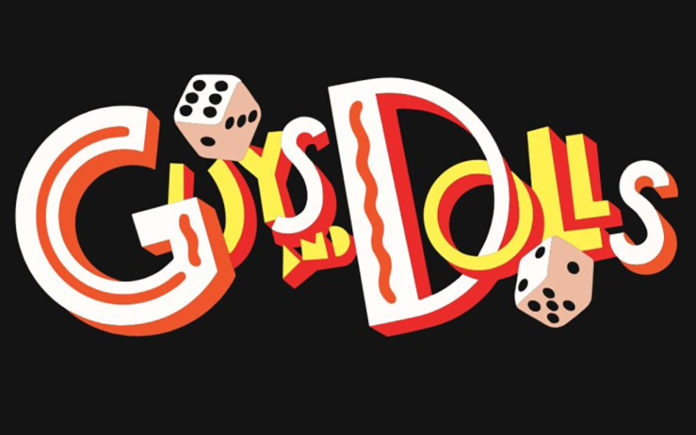 The Palm Canyon Theatre opened its main stage Guys and Dolls production, which will run through February 10 at the downtown Palm Springs theatre. Simultaneously, an all-youth cast – from nine local schools – is also presenting an abridged version of the famed Broadway musical. Many members of the youth cast are regular main stage performers at PCT, working alongside professionals to learn the craft.

Guys and Dolls follows gambler, Nathan Detroit, played by Fabrizio Ibanez, who has been seen in many PCT productions, including playing Oliver in the musical by the same name. Nathan is continually looking for the cash and location for the biggest crap game in New York City. Meanwhile, his girlfriend and nightclub performer, Miss Adelaide, played by Kayia Treash, regularly seen at PCT, Green Room Theatre Company, Musical Theatre University (MTU) and Palm Valley School, laments that they’ve been engaged for fourteen years without ever getting married. Looking to win some quick cash, Nathan makes a bet with fellow gambler, Sky Masterson, played by Ben Van Dijk, who has played Young Patrick in Mame and Benji in Priscilla Queen of the Desert at PCT. Sky ends up falling for the straight-laced missionary, Sarah Brown, double cast with Rilee Raimi, who has participated in various PCT shows, and Ava Tethal, who was nominated for a Desert Theatre League Award for her role as Rhoda in The Bad Seed at PCT last season. Sadie Paiz, who was Baby June in PCT’s production of Gypsy last season, plays Nicely-Nicely Johnson, another big city gambler with some pipes to belt out some of Broadway’s most memorable songs.

Cast members of the main stage production, including Se Layne, who plays Miss Adelaide; Paul Grant, who plays Nathan; Nicholas Sloan, who plays Sky; and Mado Nunez, who plays Big Jule are assisting the kids with character development in the youth production. Marsha Berry is the show’s director and costumer, with choreography by Jamie Gooding and Ashley Nickolopoulos. Set design is by Kirsten Cunningham with lighting design by JW Layne.

Guys and Dolls premiered on Broadway in 1950. The musical has had several Broadway and London revivals, as well as a 1955 film adaptation starring Marlon Brando, Jean Simmons, Frank Sinatra and Vivian Blaine. Guys and Dolls is based on two short stories by Damon Runyon. The book was written by Jo Swerling and Abe Burrows with music and lyrics by Frank Loesser.