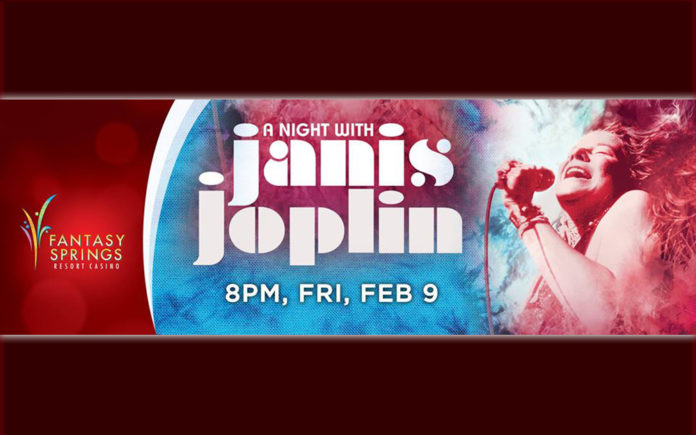 Janis Joplin’s unmistakable voice and electric presence had America enraptured in the late 1960s and in 1970, before her untimely passing at age 27. Now, almost 50 years later, you can enjoy her most famous hits in the show, A Night with Janis Joplin, at Fantasy Springs Resort Casino this Friday, February 9. I talked to Janis’ younger brother, Michael, about the show.

Can you give me a little of your background?

MJ: “My wife and I are glass makers and we live in Southwest. I’ve been managing Janis’ estate since she passed. I’ve been involved with the play since its inception, which was about six years ago.”

How did this show come about and what has your involvement been?

MJ: “My sister Laura and I wanted to do some kind of live performance, which seemed fitting because Janis was so much live. We had done one in the past and wanted to do another. So we put feelers out and our management pulled some people in. We finally met with Randy Johnson and all hit it off extremely well. We didn’t want to go into the show with any agenda of our own. I wanted to see what a good writer who had a feel for the times to see what other people’s view of it was. And it’s been so interesting with duets and Randy has such an interesting take. We all fell in love. My sister and I gave Randy access and answered whatever questions he had. He was diligent in his research. We’ve been involved in casting and PR. We support the team and it’s great.”

Do you go to a lot of the shows? Will you be coming to the one at Fantasy this weekend?

This show has gotten rave reviews and allows people to celebrate what was so great about your sister. Has this show been therapeutic to you in dealing with your loss, however long ago?

MJ: “That’s a pretty huge existential question. Yes, absolutely. It’s always cathartic. It’s like I get to visit with her which is a rarity for people that pass. I’m here 50 years later talking to you about her and my childhood. It’s been an ongoing, interesting journey. Usually when someone dies they go away, but I’m still talking about her decades later.”

What was it like growing up with a famous sibling? You must have so many amazing stories, in fact I’ve read some. Do you have any I might not have read about?

MJ: “Like secret stories I haven’t told anyone yet? No. (Laughs) I was the baby of the family, so I was treated accordingly. I had two older sisters who liked to dress me up. We had a good family. We sang and played music together. We did a lot of art. Our parents were avid readers.”

Is there other musical talent in your family?

MJ: “There’s musical talent but not on that scale. Not like Janis. We are all artistic. We went with our parents to see Janis perform in San Francisco and I think looking back on it now, they were checking up on their daughter. Rightfully so. We had a great time. We went to the Avalon Ballroom, we saw a light show. It was pretty wild. It was great.”

Were there any celebrities you met through your sister who you were star struck by? 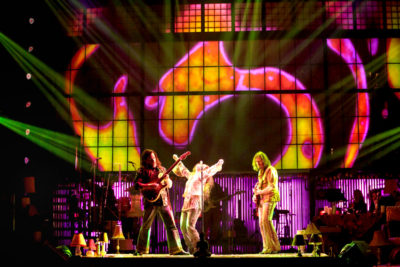 MJ: “No, I was more star stuck by Janis herself. We would go watch her concert and I’m looking at the audience and I’m thinking, ‘look at all these people watching my sister!’ The audience reacted to her and that put things into a whole other perspective for me. Even now, when I’m watching the show, the girls that are singing on stage rock it but most of the time I’m watching the audience for their reactions.”

For people seeing the show this Friday, what can they expect?

MJ: “The interesting aspect is you don’t have to know who she is or what she did. It’s about an artist creating her art and how she got to her destination. It’s an interesting arc as an artist. How do you get to your product? So that I love that as an artist. I love the craftsmanship that goes with it and the internal machinations of an artist at work.”

It was great talking to you. I’m going to the show this weekend, so I’m excited to see it.

MJ: “You’ll have a lot of fun. Even if you don’t know the music, you’ll have a great time.”

I do know the music. When I was in high school, all of this music that my parents listened to became popular again and my friends and I listened to a lot of it.

MJ: “My kids were like that too. That’s interesting, isn’t it? That is totally weird that 50 years ago those guys were making world-changing music that we’d still be listening to now.”

To see this fantastic show, go to fantasyspringsresort.com to purchase tickets.