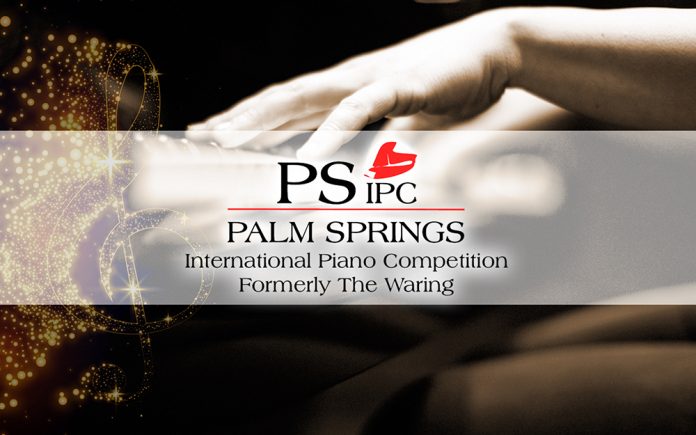 Nov 15, 2022 Annenberg Theater and The Atrium at the Palm Springs Art Museum

The Palm Springs International Piano Competition got off to a hot start in Palm Springs at the Annenberg Theater on November 15, 2022. This was the first outing since the name change that occurred last June. Formerly the Waring, the performance theme reflected the new sensibilities brought about by a new board president, Joe Giarrusso, and a new artistic director, Robert Koenig.

Event chairs CJ Westrick-Bomar and Sandra Cooper Woodson welcomed the enthusiastic audience. PSIPC’s Board President Joe Giarrusso addressed the crowd via Video due to his recent open-heart surgery. Although not there in person, his dedication and passion for PSIPC came through loud and clear. A touching Memorial Video Tribute honored the late philanthropist and PSIPC Board Chairman Peggy Cravens. Cravens was recruited by the late Virginia Waring in 1999 to help revive the Competition. Together they made musical history among piano competitions.

The evening’s theme was “A Celebration of American Composers.”  A jazz offering by Scott Joplin, Pecherine Rag, started off the evening, followed by a contemporary composition by American Samuel Barber, “Excursions,” and a rendition of the Nutcracker Suite by Tchaikovsky ended the set performed by 2022 Waring artist Andrew Boyle of Los Angeles, California.

There you have it ladies and gentlemen: classical music with sprinklings of jazz and more popular musical genres.

The 2nd performer was Julie Garnyé, Broadway performer / Cabaret singer par excellence! Garnyé and her fabulous accompanist, Michael Sobie presented 5 glorious tunes representing the best of the American Songbook: “It Had to be You” by Jones and Kahn; “Come Rain or Come Shine” by Arlen and Mercer; “Fly Me to the Moon” by Hoagy Carmichael and Ned Washington; and “How Deep is the Ocean” by Irving Berlin. Delicious!!

The 3rd performer gave the audience the “traditional” classical repertoire:  6 etudes by Chopin.  Nathaniel Zhang, 15, was a double winner back in 2019 when he was 12.  He received a standing ovation.

Last, but not least, Artistic Director Laureate John Bayless shared stories of his youth in Texas, his mentoring at Juilliard by the great Leonard Bernstein and his personal struggles following a stroke in 2008. Bayless performed an improvisation of Henry Mancini’s “Moon River” with Rachmaninoff’s Concerto No. 2 and concluded by dedicating “Somewhere” from West Side Story by Bernstein to the late Peggy Cravens making many teary-eyed.  All rose to a standing ovation!

Funds raised support PSIPC’s education engagement programs in local schools and the next International Piano Competition in 2024 which features pianists ages 12 and under and teens ages 13 through 17. Each division contains solo and concerto rounds plus master classes. Audiences enjoy over 40 hours of free live music.

Upcoming events are Romance of the Holidays on December 20 at CVREP featuring the music of Joe Giarrusso.  Piano, cello, violin, and French horn all make for a fascinating concert. Dessert Reception follows the concert. Tickets are $75 and include a tax-deductible portion. On March 20th at the McCallum Theatre PSIPC will present Variations on Three Pianos-Six HandsTM.. Contact psicp.org for more information. www.psipc.org / 760-773-2575.