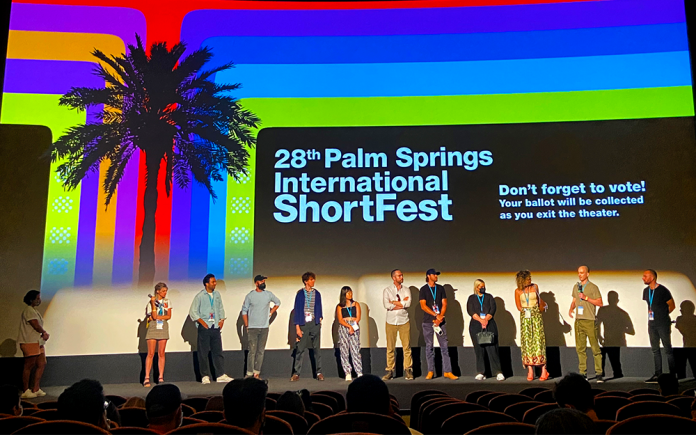 The 2022 Palm Springs International ShortFest hosted a variety of programming from June 21st through 27th at the Palm Springs Cultural Center. More than 5,800 short films from 134 countries were submitted for the festival. There were 51 curated programs showcasing 300 films including 38 World Premieres, 17 International Premieres, 35 North American Premieres and 18 U.S. Premieres.

Of those 51 programs, there was one that showcased the dark side of living out one’s desired aspirations and goals. “Living the Dream” premiered on June 23, showcasing six different short films that demonstrated themes of suffering and loss, triumph and victory, as well as missed opportunities.

“Whiling” from the USA follows a writer who lives with his girlfriend in a cabin in the woods as the isolation proves to be too much for him, and his ways to pass the time while she is out turn deadly. “Lovebirds” from Spain had its North American premiere at the ShortFest, and takes place amid a global pandemic, as a man arrives at an empty hotel to await his companion. Longing to escape his loneliness, he finds companionship only among the curious birds around him.

“Act of God” from the USA centers on Stuart, a disabled man, who has trouble asking other people for help and yearns for total self-reliance. “NYC Tips and Tricks” from the USA follows a small-time travel vlogger’s tour of Coney Island as it is interrupted by an unexpected call.

“Enloquecer” from Spain and the USA shows a director who is willing to do whatever it takes after losing the lead actor for a music video the morning of the shoot, pushing the boundaries of ambition and morality to get a last-minute replacement. “The Conductor” from the USA is a mockumentary about LA’s, and arguably the world’s, top waiter.

Following the screening was a moderated Q&A session where the audience had the chance to ask the cast and crew questions about the short films. The question was raised about where inspiration came for each film.

“Our inspiration came from being filmmakers and the absurdity of any artistic pursuit,” stated “NYC Tips and Tricks” director/screenwriter Amber Schaefer.

“We wanted to explore why we do the things we do, especially now that everyone has an outlet that gives us the ability to create,” added Yoni Lotan.

“Enloquecer” director Hector Prats recounted how a similar situation occurred with a music video he wanted to direct that inspired his short film, and actor Andy Ottenweller from “The Conductor” referenced how working in a big city like LA is relatable when you are trying to pursue a dream career, like his character in the short film.

“You have a 40-hour work week and you forget what first brought you to the city. It was very close to home for me being in a similar situation. Eight months in LA can go by in the blink of an eye,” said Ottenweller.

The location for Victor Moreno’s film “Lovebirds” was made more accessible by the COVID-19 pandemic, as it required filming in an empty hotel, which was easier to do during pandemic restrictions.

“The main actor of the film requested to play piano and have parrots in the script, which I thought was going to be hard to do. But the hotel we decided to shoot at happened to be suffering an invasion of lovebirds, so I managed to fulfill both of his requests,” recalled Moreno.

The cast and crew of the films also touched upon the idea that all of their shorts incorporated elements of dark comedy, bringing to light uplifting aspects of life mixed with dreary ideas. A question was posed about how to mix polar opposite tones to strike a cohesive balance in film.

“I find it to be more palatable when you mix dark elements with the comedy. I’ve always found the comedic aspects are more pronounced when you have the real emotions and complex human issues that provide a foundation for that,” said “The Conductor” director Graham Goldstein.

“Life sucks sometimes, but it’s also kind of funny that it sucks. I think it’s cool that all of these films reflect that idea,” stated “Enloquecer” producer Yoko Kohmoto.