Husband and wife filmmakers Michael Winokur and Iana Simenov drove from their home in San Francisco, stopped by the location of their film in Bakersfield, and arrived just in time for the Opening Night Program of the Palm Springs International ShortFest.

The couple spent the rest of the week meeting other filmmakers, attending forums, parties and screenings.  Their film, “Stealing Rosario” (USA 16 minutes), was part of the “All in the Family” program.

“This is our sixth festival.  Considering we‘ve been to other festivals, I can say this is a great festival!  That’s because the films and the filmmakers are amazing,” said Winokur.  “We met so many brilliant, interesting people from all over the world.  The City of Palm Spring and the Festival turn out to support this art form in a way that we have not seen anywhere else.  They are selling out all week long.  And I’m grateful for the support of short films.”

Winokur and Simenov co-wrote, directed and produced their film.

“As filmmakers you can’t underestimate the value of being able to see other people’s work,” said Simenov.  “It’s extraordinary and the quality of the films in this festival is incredibly high.  It’s a great place to come, to actually get inspired and to see what other filmmakers are doing.  And it provides a chance to talk to them about their films, and potentially work with them in the future.”

This is the time of year when creative, young and talented filmmakers from all over the world swarm into Palm Springs to celebrate the art of cinema.  It’s not just about the joy of watching hundreds of interesting films; it’s about nurturing and curating future artists.   That’s what ShortFest experience provides.

For Jordan Ledy and his documentary film “It’s Better in Italian,” the ShortFest experience was excellent.  “This is my first film and third festival.  I love Palm Springs,” said Ledy.  “One of the subjects in my documentary has a house here and I attended in January because I edited “Don Quixote”, which James Franco adapted for USC.”

Ledy also enjoyed filmmaker and fellow Trojan, Jason Reitman (Juno, Up in the Air) who was the keynote speaker at the Filmmakers’ Brunch held at the Renaissance Hotel.  Reitman is also a ShortFest alum and Academy Award Nominee.

“He encouraged young filmmakers to face challenges.  He shared what inspires him and that telling stories is why he gets out of bed in the morning.  He was incredible,” said Ledy.  “It was the cherry on top of an amazing day.  It’s only a little over-shadowed since I won three awards.  So I’m a little over the moon.”  Ledy won Best Student Documentary, Best Student Film and Audience Award for Best Documentary.

Asher Grodman writer and director of “The Train,” actor Eli Wallach’s last film, was impressed by Reitman’s keynote speech as well.  “It was fantastic.  He talked about his father’s role [director Ivan Reitman] in his life and how it released him of certain pressures,” said Grodman.  “I was very moved by a lot of what he said.  I cried through 60 percent of his speech.  He talked about the safe options, but that there are choices that inspire you and can touch someone.  As a filmmaker, I want to live with that inspiration.”

Reitman also shared with filmmakers that the ShortFest is filled with moments that build a career and that someday they will look back and appreciate they were in Palm Springs.  He also encouraged the filmmakers to give back and to share their knowledge with others.

Valley resident and independent producer Kim Waltrip served on the ShortFest Jury.  “I like being a judge because I was very relaxed.  I didn’t have the pressure or stress of having a film I was promoting,” said Waltrip.  “But what I really appreciated about the short films was they were so creative and imaginative.  I didn’t expect to go there — all the wonderfully colorful textured places — my mind really expanded.”

Waltrip didn’t put on her producer hat often while viewing the films.  “As a producer, I appreciated that these filmmakers got so much story compacted into a small space,” said Waltrip.  “Mostly, I let go because I wanted to be objective.  I didn’t want to know anything in advance.  I wanted it to be organic and I want to be an emotional watcher.  So I lead with emotion and then I looked at production value and execution.”

The Jury was made up of six industry professionals.  Each watched 52 movies and then they got together to decide.  A designated tie-breaker was used twice.

Surrounded by friends and filmmakers, Aftab Dada, General Manager of the Hilton Resort and Spa, sponsored the Closing Night Party.  “Palm Springs Short Film Festival is an amazing event that is developing the upcoming stars of our film industry,” said Dada.  “It means so much that the city is dedicated to the ShortFest.  Granted, this is not a profitable Festival, but it’s an important investment for our future.”

Film Society members, industry professionals and filmgoers mingled throughout the week.  “We are very satisfied with the ShortFest,” said Festival Chairman Harold Matzner.  “It’s a major educational event for our emerging filmmakers.  We get over 600 filmmakers out here from all over the world.  It is certainly wonderful in that sense.”

Robert Wright is one of 200 plus volunteers for the ShortFest.  He has done the job for ten years and is a member of the Palm Springs Film Society.  He is happy and cheerful and eager to assist any way he can.  “I go everyday.  I work the special events and transportation,” said Wright.  “This is a fun festival and my favorite.” 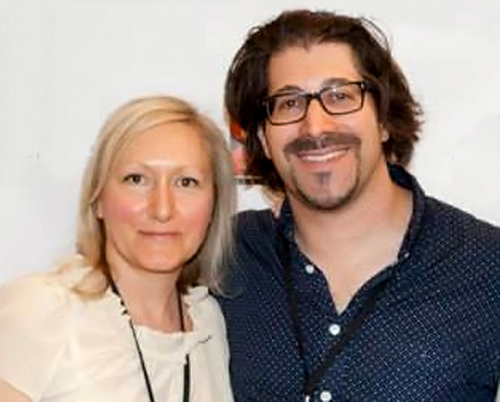 Indeed, ShortFest is a favorite for many.  As husband and wife filmmakers Winokur and Simenov return to the bay area, they will consider all the new friendships and new ideas that have come from such a meaningful and important experience.