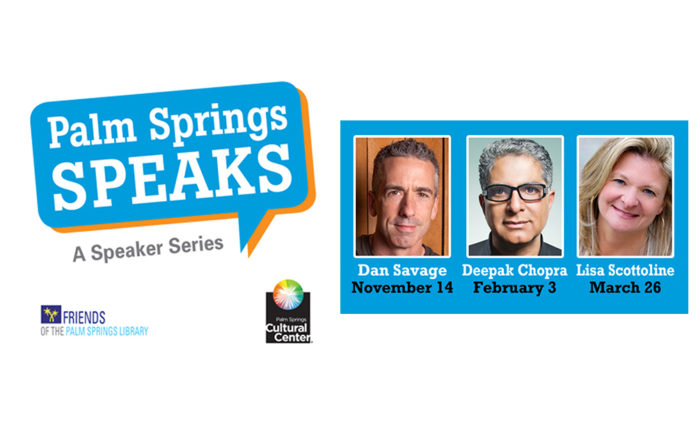 The series kicks off on Tuesday, November 14, 2017 with author Dan Savage at the Camelot Theatres. Dan Savage is a writer, TV personality, and activist best known for his political and social commentary, as well as his honest approach to sex, love, and relationships. “Savage Love,” is syndicated in newspapers and websites throughout the world. He is the Editorial Director of The Stranger, Seattle’s weekly alternative newspaper, and his writing has appeared in publications including The New York Times, The New York Times Magazine, GQ, Rolling Stone, The Onion, and on Salon.com. Savage and his husband, Terry Miller, are also the creators of the It Gets Better Project, a global movement to inspire hope for LGBT youth facing harassment.

Deepak Chopra MD, founder of The Chopra Foundation and co-founder of The Chopra Center for Wellbeing, continues the series on Saturday, February 3, 2018 at the Palm Springs High School Auditorium – Richards Center for the Arts. Dr. Chopra is a world-renowned pioneer in integrative medicine and personal transformation, and is Board Certified in Internal Medicine, Endocrinology and Metabolism. He is a Fellow of the American College of Physicians, Clinical Professor at UCSD Medical School, Researcher, Neurology and Psychiatry at Massachusetts General Hospital (MGH), and a member of the American Association of Clinical Endocrinologists. Additionally, Chopra serves as Co-Founder of Jiyo, an Adjunct Professor of Executive Programs at Kellogg School of Management at Northwestern University and of Columbia Business School, Columbia University.

Chopra is the author of more than 85 books translated into over 43 languages, including 25 New York Times bestsellers. His ground-breaking book, Super Genes, co-authored with Dr. Rudolph Tanzi (Harmony, November 2015) focuses on the new genetics and is revolutionizing how we understand ourselves and the health of those around us. The World Post and The Huffington Post global internet survey ranked Chopra #17 influential thinker in the world and #1 in Medicine. TIME magazine has described Chopra as “one of the top 100 heroes and icons of the century.”

The third featured author in the series is Lisa Scottoline, who will be speaking at the Camelot Theatres on Monday, March 26, 2018. Lisa Scottoline is The New York Times bestselling author of 29 novels, as well as a series of humorous memoirs. She began her crime fiction writing career in 1994 and has won the Edgar Award, awarded by the Mystery Writers of America. She also writes a weekly column with her daughter Francesca Serritella for the Philadelphia Inquirer titled “Chick Wit” which is a witty and fun take on life from a woman’s perspective. These stories, along with many other never-before-published stories, have been collected in a New York Times bestselling series of humorous memoirs including their most recent, I Need A Lifeguard Everywhere But The Pool.

Tickets for the three-event series can be purchased at the Camelot Theatres box office or online at palmspringsspeaks.org. General Admission to all three events is $150 and includes a book at each event. VIP admission to all three events is $250 (limited quantity) and includes a book, a pre-event meet-and-greet, catered reception, seating in center seats rows 2-20, and a special VIP priority book signing line. All events will begin at 7:30 p.m. with the VIP receptions before and the book signing after the speaker presentations. Proceeds from the ticket sales will benefit the Palm Springs Cultural Center and Friends of the Palm Springs Public Library.