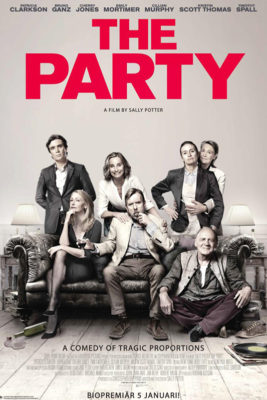 Award-winning performances from Patricia Clarkson and Kristin Scott Thomas are the big draw in this deliciously dark social satire that’s disguised as a benign (at first) comedy of manners.

In writer-director Sally Potter’s new comedy, Janet (Thomas) hosts an intimate gathering of friends in her London home to celebrate her political ascension, while her husband, Bill (a terrific Timothy Spall), is clearly preoccupied with other matters.

After April (Clarkson), Janet’s caustic best friend arrives and others follow, some with their own surprising news to share, Bill makes an announcement and provokes a series of revelations that unravels the sophisticated get-together.  Will a night that began with champagne end with gunplay?

The excellent and tight ensemble cast makes this is a party well-worth attending.  Shot in gorgeous, crisp black and white photography.  But it’s the clever zingers and the skewering of hypocrisies that make this satisfying entertainment very much of the moment.

Based on the sometimes stagey and overt theatricality of the piece, I assumed this was intentional and a clever attempt to replicate the experience of watching a compelling play from a center front row seat.  Recommended. 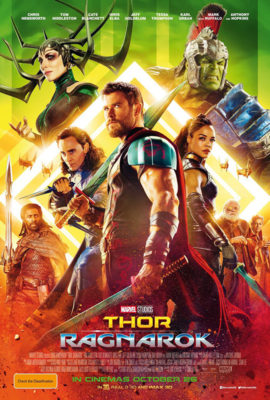 Thor is the Nordic “God of Thunder.”  He is a mythic character that precedes any comic book or graphic novel iteration.

The third installment in the Marvel Cinematic Universe (MCU) electrified audiences and critics alike bringing in nearly $900 M in the global box office!  Now the dazzling cosmic adventure, top-loaded with thunderous action, lightning-fast wit and pervasive humor, intense drama and eye-popping spectacle is available in a next generation state-of-the-art 4K HD transfer enhanced with HDR and Dolby Atmos Immersive audio.  This is as good as home video gets.

Now Thor (Chris Hemsworth) is imprisoned on the other side of the universe but minus his mighty hammer!  He finds himself in a race against time to get back to Asgard to stop Ragnarok – the destruction of his home world and the end of the Agardian civilization at the hands of an all-powerful new threat, the ruthless Hela (Cate Blanchett). 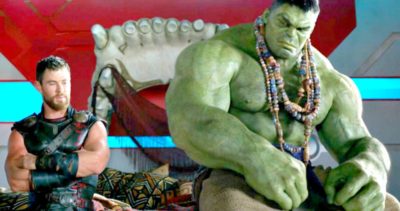 But first, Thor must survive a deadly gladiatorial contest that pits him against his former ally and fellow avenger – the Incredible Hulk (Mark Ruffalo) – and grapple with his silver-tongued adopted brother Loki (Tom Hiddleston), the fierce warrior Valkyrie (Tess Thompson) and the eccentric Grandmaster (Jeff Goldblum).

I can’t say enough about the stunning quality of this superb home video that delivers everything you could want in one of the most entertaining blockbusters of the year.  The generous extras – eleven featurettes! — include everything from an informative and fascinating Director’s Intro and Commentary to Deleted/Extended Scenes, Gag Reel and much more.   Disney.