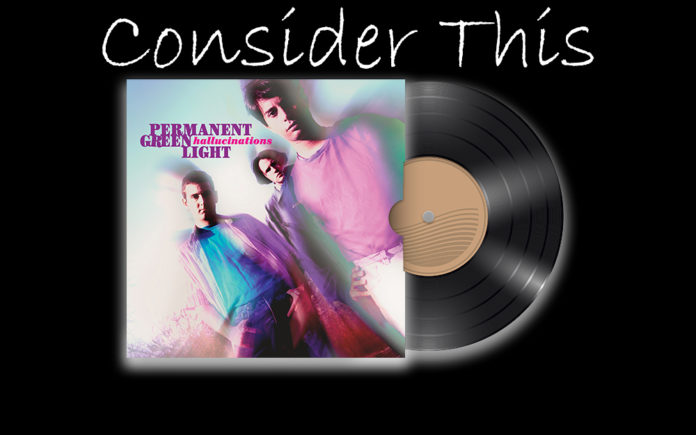 If you were lucky enough to be a part of the Los Angeles club scene in the early ‘90s, you may have known to avoid the predictable haunts that dotted the Sunset Strip, instead, favoring more eclectic venues like Al’s Bar, the Alligator Lounge, Highland Grounds, Largo and Jabberjaw.  As the influence of Hair Metal was fading and Grunge became the De facto “alternative” music, Jabberjaw provided a performance space for artists like that dog, Beck, Elliott Smith and Permanent Green Light.

Permanent Green Light rose from the ashes of The Three O’Clock. Originally known as Salvation Army, (until they received a “cease and desist” notice from the charitable organization), The Three O’Clock was the brainchild of Michael Quercio, back in 1981. The best-known line-up, coalesced a year later and featured Michael on lead vocals and bass, drummer Danny Benair, guitarist Louis Gutierrez and Mickey Mariano on keys.

Their musical style became known as Paisley Underground, a term coined by Michael during an interview with the L.A. Weekly. Building off the D.I.Y. esthetic of Punk, bands like the Three O’Clock, Dream Syndicate, the Bangles, Rain Parade, Green On Red and the Long Ryders pledged musical allegiance to the Baroque Psychedelicized Folk that was pioneered by ‘60s bands like the Byrds, Love, The Merry-Go-Round, The Left Banke and the Seeds.

After slipping a demo to Rodney Bingenheimer, the influential KROQ DJ tirelessly championed the band. Initially they inked a deal with Frontier Records, releasing their Baroque Hoedown EP and following up with the full-length 16 Tambourines LP. Both efforts garnered positive reviews and their videos received airplay on MTV. Soon they jumped from tiny Frontier to I.R.S. Records, home to more mainstream “indie” acts like the Go-Go’s, Wall Of Voodoo and Oingo Boingo.

The Three O’Clock made two records for I.R.S., Arrive Without Traveling in 1985 and Ever After a year later. It turned out that Prince was a huge fan of the Paisley movement (he even named his recording studio and boutique label Paisley Park). The band released their final album, Vermillion through Prince’s imprint. But real commercial success eluded them and by 1988 the band had called it quits.

Michael Quercio was at loose ends, he was briefly affiliated with Scott Miller’s band, Game Theory. They wrote and recorded a few songs, but that group was on the verge of imploding as well. When Scott suggested they join forces as The Loud Family, it seemed like a great idea, except Scott was based in San Francisco and Michael didn’t want to leave Los Angeles. So they parted ways.

Michael briefly recharged his creative batteries playing bass with the infamous L.A. legends, the Imperial Butt Wizards. But it was at Jabberjaw when he first crossed paths with guitarist Matt Devine. Matt had already made his bones with his first band, Lazytown. He and Michael bonded over their shared affinity for Big Star, the Left Banke ‘70s era Byrds songs. Deciding to form a band they were initially known as The Fairy Turnout. They got a gig together, but the night of the show the drummer flaked. So as a temporary duo, they played an original song and Jethro Tull’s “A New Day Yesterday.”

Not long after the show, Michael re-connected with drummer Chris Bruckner, who began his career at age 14, playing in a Psych-Garage outfit called the Marsupials. As a three-piece, Permanent Green Light had their live debut at a downtown art show in 1991. Soon, they began opening for bands like Shonen Knife and Teenage Fanclub.

During his tenure with The Three O’Clock, Michael wrote all the songs, with PGL, the process was more democratic. Matt contributed his own compositions and sang lead on those songs as well. Initially, they demoed everything on 4-track cassette, and then recorded three songs, “We Could Just Die,” “The Truth This Time” and “The Ballad Of Paul K,” in a studio located in the San Fernando Valley.

Rodney Bingenheimer added the songs to his weekly KROQ show and “We Could Just Die” hit #1 on his “Flipside” Top 20 list. Scene-maker Bill Bartell, (a.k.a. Pat Fear), architect for bands like White Flag and Tater-Totz, offered to release the songs through his Gasatanka label, but later Permanent Green Light found a home at Rockville Records.

Their self-titled EP arrived in 1992 and the trio immediately hit the road sharing stages with bands like The Muffs, Redd Kross, and The Fastbacks. Their first full-length, Against Nature, arrived a year later, produced by Earle Mankey, who had been behind the boards for seminal albums from 20/20, The Runaways, The Long Ryders, Concrete Blonde as well as The Three O’Clock.

Both efforts garnered critical praise and built a passionate fan-base, But Permanent Green Light never gained real national attention. As the ‘90s wore on Grunge ruled the airwaves. Perfect Psychedelic Power Pop was not in favor. Even though it felt like the band was just getting started, everything sort of fell apart.

Matt left the band in 1994, forming Ventilator and later playing in Medicine and Possum Dixon. Michael and Chris went on to form The Jupiter Affect. Long out of print, it seemed like the music of PGL was lost to the mists of time. Luckily, Omnivore Records has just released a 16 track compilation aptly entitled hallucinations.

The record opens with the one-two punch of “(You & I Are The) Summertime” and “We Could Just Die.” “…Summertime” spits out sharp shards of staccato guitar, wiry bass lines and a pummeling back beat. A sunshiny melody peeks out from beneath the calibrated chaos, Michael and Matt’s tight harmonies dovetail, sweetly insisting “You and I have no worries, we just relax in the day we find, when all the world seems to hurry, there’s nothing left in my mind.” As the action revs on the break, the guitar soars and then retreats as pounding drums hug the melody’s hairpin curves. Finally the whole thing collapses in a tangled heap.

“We Could…” kicks the momentum into interstellar overdrive. Whipsaw guitar rides roughshod over a fractious rhythm. Angelic “hoooo-ahhhh” harmonies undercut the razor-sharp guitar riffs that hew more closely to Kiss or the Replacements than the Left Banke. Although the lyrics reiterate the sentiment “We could just die,” it doesn’t seem like anyone here is ready to crossover to the other side just yet.

The EP is represented by three songs, the aforementioned “We Could Just Die,” as well as “The Truth This Time” and The Ballad Of Paul K.” The former unfurls with an infectious cluster of wah-wah licks that evokes both “Voodoo Chile” and the “Theme From Shaft.” Leaping into the fray, Michael confronts a duplicitous lover; “I’ve been told this love is going nowhere.” But on the shimmery chorus he seems to doubt the evidence; “Baby, what goes down, I heard the word you’ve been around, but I don’t believe the truth this time.” The guitar solo on the break, is as ripped and lean as a ‘70s action hero.

The latter is a gauzy encomium to Paul K, leader of the Imperial Butt Wizards. Crushed velvet harmonies envelope guitars that chime and jangle. The lyrics honor a genuine “counter-culture sensation” who “means more to me than wine and conversation.” Almost as lovely as the sentiments contained herein are the layers of acoustic and electric guitar that cascade over the melody.

As bespoke and beautiful as the Three O’Clock cannon was, Michael, Matt and Chris seem to have made a conscious decision to keep Permanent Green Light’s sound more stripped-down and muscular. There is a surfeit of tracks here from “Against Nature,” an album that was directly inspired by the French novel “A Rebours,” (published in English as “Against Nature” in 1884). Simultaneously aesthetic and decadent, the book was said to have inspired Oscar Wilde.

“Against Nature” songs run the gamut from the rollicking ride of “Street Love,” to the prickly tilt-a-whirl of “Wintertime’s A-Comin’ Martha Raye.” That tune improbably pays smartass, sideways homage to the legendary singer-comedienne and enthusiastic Polident spokeswoman. If Beach Boy/musical savant Brian Wilson had ever collaborated with Big Star’s Alex Chilton, (between the SMiLE  and Third/Sister Lovers albums), it might sound like “Fireman.” A downcast ballad, it weds plinky, dissonant piano, honeyed acoustic riffs, throbby percussion and Michael’s aching falsetto. Desolate electric riffs sear into the aural landscape as sirens lick the edge of the melody. Meanwhile, “Marianne Gave Up Her Hand” is an ornate, slightly Elizabethan roundelay in ¾ time. Only Michael Quercio could rhyme “slouch and couch” while weaving a tapestry of pastoral acoustic guitar and billowy French Horn.

The best tracks here are “Honesty,” which matches souped-up guitars with shivery harmonies, tensile bass lines and a thundering beat. Relentlessly hooky, it only improves on the instrumental break, as Matt unleashes a series of crisp and intricate notes like some kind of one-man guitar army. Conversely, “Portmanteau” starts out slow and stately, as courtly Spanish guitar is supplanted by knotty electric riffs and a martial cadence. Cryptic lyrics reference “insincerity, old age and syphilis.” Eek. Rather quickly, Shang-a-lang guitar licks give way to pile-driving power chords as the song careens toward a Psychedelic Freak-Out. It’s as though Love’s “Alone Again, Or” was suddenly t-boned by “Hold Your Head Up” from Argent. Happily, it has nothing to do with Brangelina.

Other interesting cuts include “Goddess Bunny,” a Fuzz-tastic ode to a physically challenged drag queen that features this sly couplet; “Having my way with the Goddess Bunny, twisted limbs but that’s not funny, especially to Bunny.” “All For You” is a whispery piano ballad that pretty much confirms that love will Fuck you up. Also included here are original 4-track demos for the scorching “Lovely To Love Me” and primitive versions of “Street Love” and “(You & I Are The) Summertime.” The record closes with a sampling of PGL songs that could originally be found embedded in a back issue of “Sassy” magazine. It’s a whimsical way to end a brilliant collection.

Not enough can be said about the crackling melodies, arrangements and instrumentation found on this album. The songcraft is impeccable, equal parts economical and expansive. Putting the Power in Power (Pop) Trio, it’s nearly impossible to believe only three people created this panoramic sound. Matt has managed to distill all of his ‘60s and ‘70s antecedents and repurposed them in fresh and familiar ways. Chris pounds his kit with a shambolic alacrity that recalls a young Keith Moon. Of course Michael is Rock N’ Roll’s Dorian Gray, his vocals remain lithe and ageless. Packaged together it’s almost shocking that this band didn’t rule the airwaves.

Maybe Permanent Green Light was a head of it’s time. Woefully underappreciated in the ‘90s, an era that took Color Me Badd, Ace Of Base and Haddaway to the top of the charts. hallucinations makes it easy for everyone to (re)discover the magic that incubated in Jabberjaw, oh, so long ago. The music hasn’t aged a day.