wan’der-lust’
n. [Ger] an urge to wander or travel 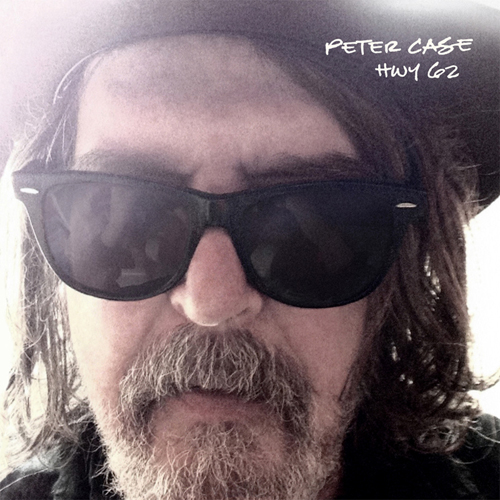 Peter Case grew up in Hamburg, New York, one block off Hwy 62, which runs from Niagara Falls 2,248 miles to Juarez, Mexico. He first tried to run away down Hwy 62 when he was four years old.  His wanderlust began at an early age.

Born in 1954, Case grew up with two older sisters who introduced him to the illicit thrills of Rock & Roll. His first instrument was a Mickey Mouse ukulele purchased with green stamps. He wrote his first song at age 10.

Elvis and The Beatles were seminal influences. By the mid-sixties it was Dylan, and then he discovered Mississippi John Hurt. At age 16 he hitchhiked to Boston to see Lightnin’ Hopkins play. Music seemed to be his destiny.

Case quit high school in the ninth grade (later he got his GED). Although he was underage, he played in a series of bar and garage bands. By 1973 he migrated across the country, landing in San Francisco. He fell in with street musicians and began busking to earn his keep.

In the mid-1970s, San Francisco still felt like the Wild West, loaded with possibilities. Punk rebellion was in the air. Case connected with Jack Lee and Paul Collins in 1976, forming the Nerves. A proto-Power Pop/Punk band, they quickly re-located to Los Angeles, where the Punk scene was exploding.

The Nerves released an EP and toured, opening for the Ramones. But three talented front-men had trouble co-existing in a band.  The Nerves broke up in 1978, despite their brief tenure, they left a lasting legacy. Blondie later recorded the Jack Lee composition, “Hanging On The Telephone” and it was a massive success.

From the ashes of the Nerves, Peter Case and Paul Collins formed the Breakaways which imploded almost immediately. On his own again, Case corralled bassist David Pahoa and drummer Louie Ramirez and began gigging around L.A. as the Tone Dogs  They signed  to the tiny Beat Records label and began recording a five song EP. Guitarist Eddie Munoz joined the line-up and they changed their name to the Plimsouls.

They signed a deal with Planet Records, (an imprint of Elektra). Their self-titled debut arrived in 1981, it should have topped the charts, But it kind of got lost in the shuffle. Luckily, the band was tapped to perform in a movie, “Valley Girl.”

Initially, it seemed like another raunchy teen/exploitation comedy capitalizing on the Val slang-speak popularized by the Frank Zappa/Moon Unit song, “Valley Girl.”  But the movie turned out to be a sharp and soulful take on “Romeo And Juliet” (if the Montagues and Capulets were Punks and Vals). It also featured Nicolas Cage in his first starring role.

The Plimsouls portrayed themselves in scenes shot at Club Lingerie in Hollywood.   They played three of their own songs, including “A Million Miles Away.” The song mixed the sweet jangly guitar sound of the Byrds with a Punk Rock intensity that made it an instant hit.

The band released another full-length, Everywhere At Once in 1983 through Geffen Records. But   Peter Case was already getting restless. He briefly formed the Incredibly Strung Out Band with his first wife, (high desert music legend) Victoria Williams, but they never made a record.

The Plimsouls broke up, and Case decided to go solo. Teaming up with producer T-Bone Burnett, his debut arrived in the Spring of 1986. Spare and wistful, the mostly acoustic effort harkened back to his busker days. The music industry took notice, and he received his first Grammy nomination.

He quickly followed up in 1989 with the even Folk-ier The Man With The Post Modern Fragmented Neo-Traditionalist Guitar.  People began crediting Case with sparking the new “unplugged” movement. Naturally, he subverted expectations by releasing the amped up “Six Pack Of Love” in 1992.

Peter Case parted company with Geffen Records, signing with the stalwart Folk label, Vanguard in 1994.  Taking some time to re-group, his first Vanguard effort, Sings Like Hell was a collection of his favorite traditional and modern Folk songs. New songs surfaced in 1995 on Torn Again.

By the turn of the century, Case had sort of found a niche, as something of a hardcore troubadour. His next three albums, Full Service, No Waiting, Flying Saucer Blues and Beeline, released in 1998, 2000 and 2002, were produced by Andrew Williams. Each walked a keen knife’s edge between Folk and Rock.

He also managed to find time for a Plimsouls reunion, which elicited the underrated Kool Trash album. Plus, he produced a tribute album, Avalon Blues to one of his idols, Mississippi John Hurt. The album was nominated for a Grammy in 2002. He even got the opportunity to perform Beatles song at the Hollywood Bowl with their producer, Sir George Martin.

As the 21st century progressed, more albums arrived. Let Us Now Praise Sleepy John Estes came out in 2007, he wrote an autobiography of sorts, As Far As You Can Get Without A Passport. It covered his childhood, his hitchhiking adventures up through his arrival in San Francisco.

Heart surgery in 2009 temporarily slowed his roll, but he re-bounded in 2010 with his Wig! album. In 2012, Case participated in a short-lived tour with Paul Collins wherein they shared the stage rotating between songs by the Nerves, Breakaways, Plimsouls and Paul Collins’ Beat. Now he is back with his first solo album in five years, Hwy 62.

He concludes “Well, it ain’t no kind of justice, it’s a system of abuse/There ain’t no courts watching over it, politician’s say ‘what’s the use’/They got rate of incarceration in the world and the prisoners are black/Everybody knows it’s slavery, everybody knows the neck is snapped.”

For Case, the political is personal and at least four tracks explore the inequities that divide the haves and the have-nots. The Folk/Blues of “If I Go Crazy” is anchored by chugging acoustic guitar chords that dovetail into barrelhouse piano runs. The lyrics share a series of sad vignettes detailing economic despair, but Case reckons the tide can still turn. “I possess the super-powers everybody does, whoever helps somebody else and does it ‘just because’/Who never answered ‘later’ when asked to lend a hand, who never turns their eyes away when asked to lend a hand.”

Propelled by jangly acoustic riffs, the buoyant melody of “All Dressed Up (For Court)” belies sober first-person account court house justice. Case paints a vivid picture; “The D.A. throws his weight around, they all assume I’m jailhouse bound/I tell the truth but that won’t help, I’m terrified to be myself.”

Chiming, giddyup guitars, high lonesome harmonica fills and “are you ready boots, start walkin” bass lines (that would do Nancy Sinatra proud), provides sweet ballast for the sharp parables of injustice presented on “Evicted.”  Even the newborn King Of Kings gets the shaft. “When there was no room at the inn, they wouldn’t let their savior in/The poor deserve some equity, not the sherriff’s deputy.”

The most powerful track is “Water From A Stone” presenting the sort of intense imagracion saga that, sadly occurs every day for people trying to make better lives for their families. Shimmery Spanish filigrees flutter and dance through the melody as slide guitar provides a poignant through line. Case’s criticism is equal parts wary and withering. “All the streets  paved with diamonds and gold, your head is held high, but the future is sold/The temperature’s rising way up in the sky, this is Indian land only yours by a lie.”

A couple of songs here, “New Mexico” and “The Long Good Time” manage the neat trick of time travel. Roiling acoustic guitar intertwine with droning, modal electric guitar on the former. We aren’t transported by a souped-up DeLorean, more like a grungy Econoline, as he recalls the good times and bad times that accompanied his early tours.

“We never had to  worry when we played our songs, the  people  were friendly  and the nights  were long/And there  were  nine  kinds of mother-fuckers, band-mucking bloodsuckers everywhere we’d go, but the music always  sounded right when  you heard it late at night when we crossed the  mesa into New Mexico.”

The journey stretches back further on the latter, which limns halcyon childhood memories in Hamburg. Early musical explorations were met with mixed results; “My band was playin’  in the basement, driving folks out of their minds/Mother called down from the top of the stairs ‘Boys, play  that nice song about suicide’ “

Other interesting tracks include “Waiting On A Plane.” The instrumentation is a spare confluence of loping acoustic guitar, a shuffling, brushed snare rhythm and piano grace notes.  If it were possible for Bob Dylan’s “It Take’s A Lot To Laugh, It Takes A  Train to Cry” to make a musical love-child with Eddie Cantor’s “Makin’ Whoopee,” This is what it would sound like.”

Speaking of His Royal Bobness, Case turns in a loping version of an obscure early-sixties Dylan demo, “Long Time Coming.” The album winds down with “Bluebells,” a restless farewell to a fallen comrade. A tender encomium, Case offers an eloquent elegy to an almost-forgotten friend over piquant electric guitar. The title track closes out the album, an instrumental coda that consists of a rollicking Boogie Woogie piano vamp.

Hwy 62 was produced by Peter Case and Sheldon Gromberg. Although the instrumentation is mostly bare-bones they get stellar assistance from Ben Harper on guitar, David Carpenter on bass, Don Heffington and D.J. Bonebrake from X on drums. Cindy Wasserman provides harmonies and Jebin Bruni plays keys.

This amazing album meanders much like the highway it was named for, crossing cultural and economic borders along the way.  Peter Case has found the perfect vehicle to satisfy his wayfaring spirit.