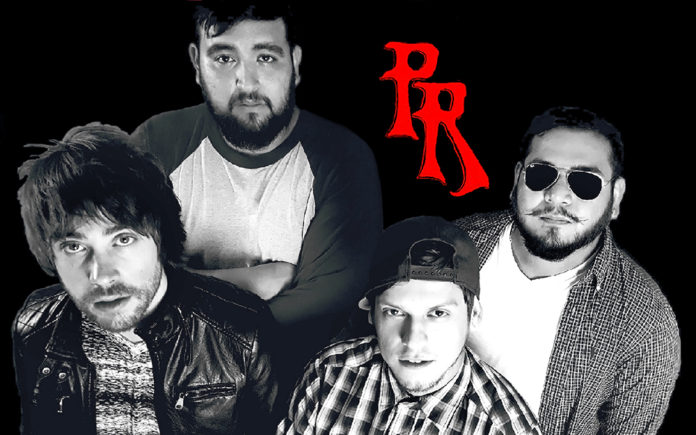 Every now and then a band comes along from out of the blue and challenges the status quo.  Plastic Ruby has nonchalantly entered 2018 as an ‘artist to watch’. With John Marek on guitar and vocals, Julio Corrales on bass and back-up vocals, Isidro Corrales on keyboards and guitar and Eddie Airada on drums, Plastic Ruby will be performing next at The Hood Bar & Pizza on Saturday, September 7, 2018 along with 2018 Coachella Valley Music Award winner for Best Youth Band, FrankEatsTheFloor. Admission is FREE and the show starts at 9 p.m. Coachella Valley Weekly recently spoke with Plastic Ruby’s consciousness-expanding vocalist and guitarist Marek.

Coachella Valley Weekly: Where does the name Plastic Ruby come from?

John Marek: “My niece’s name is Ruby, and a lot of my favorite band names are oxymorons so I went with Plastic Ruby – plastic being plentiful, rubies being rare.”

CVW: Your band mates seem to be prolific and very talented. What things can you share about them that we may not know?

Marek: “Eddie is an animal on the drums and has an incredible knack for keeping time. We used to play shows a lot back in the day when we were in different bands, so we’ve known each other for a long time. Julio, our bass player is also very talented with timing and has been a fellow band mate of mine for close to a decade now, primarily playing drums in various projects over the years. Isidro is actually Julio’s younger cousin who joined our project some time in 2017. He is an exceptional guitar player and has talent in writing as well. He’s also managed to learn how to play the keys in less than a year.”

CVW: What sets your sound apart from other artists?

Marek: “We use lasers to make our songs.”

CVW: What do you enjoy writing about in your songs?

CVW: You have played shows with some pretty cool artists from the Coachella Valley. Who are some of you favorites?

Marek: “There is a giant well of talent in this valley and it’s hard to pick favorites but if I had to, I’d say Little Red Spiders and Slipping Into Darkness have a pretty firm grasp on what current rock n’ roll music should be.”

CVW: How does the band prepare for a show and what should attendees expect?

Marek: “We prepare for each show with a sacrifice. Then we usually go through the set once, if possible. As far as what the audience should expect, you’ll see a rock ‘n’ roll band consisting of four dudes, playing all original 60’s/70’s-inspired-psychedelic-blues-garage-pop with jangly guitar riffs and infectious vocal hooks.”

CVW: Where does Plastic Ruby go from here?

Marek: “We are going to be playing shows in L.A. shortly and will be planning a tour of California for next year.”

CVW: How can readers and interested music fans find your music?

Marek: “They can’t because it’s not out yet, however, our debut EP and music video comes out this December. In the meantime, you can check out our teasers and promos on Instagram and Facebook.”

Marek: “Come to our show at The Hood on the 7th because it’s gonna be a banger!”

Plastic Ruby’s sound affects your mind so as to produce vivid visions. The psychedelic approach of these young musicians is refreshing. Because there is so little of their music available, it is recommended you watch their live performance at The Hood on 9/7.