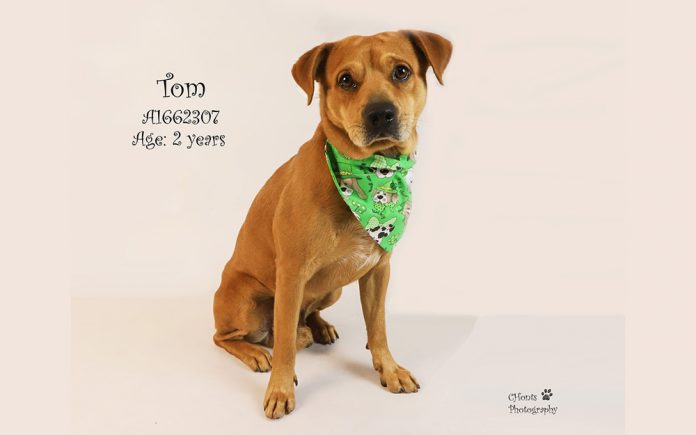 Social media puts the faces of abandoned and neglected animals into the public arena.  On March 2, 2022, Michelle Mendoza posted a photo of a terrified dog appearing stranded on the medium of Indio Boulevard on the DOGS IN THE 760 Facebook page.  The trembling animal is seen peering around a bush in the center divider as cars whizzed past.  The dog was near Fargo Street, an industrial area with few homes nearby.

Animal advocate Diane Medley saw the post and soon joined dog lover Nancy Casillas and her two daughters at the Indio Boulevard site.  There were concerns he would be injured or killed if he attempted to cross the street.  They parked their cars and walked to the medium where the dog was.  He met them with growls, but they realized it was more from fright.  They spoke calmly to the pup, ignoring his snarling.

Nancy’s daughter picked up the long rope attached to the dog’s neck.  They realized he wasn’t tied to anything at that point.  How he got loose from wherever he was tied remains a mystery.  The long rope allowed the women to guide the dog to Diane’s car in a nearby parking lot.  Once they reached safety on the side of the street, his demeanor transformed.

Diane recalls, “Once he knew he was safe, he calmed down and let us pet him.  Inside my car, he was such a perfect sweetheart!  I took him home and removed the rope from his neck and gave him food and water.  He never growled again.  Because I have an unvaccinated “medical” foster dog, I had to keep him in a crate in the garage overnight.  He stayed there without complaint.  He walked nicely on a leash for many potty trips outside.  He could see my cat and foster dog through the sliding glass door and wagged his tail to greet them.”

On March 3, Diane took him to the Coachella Valley Animal Campus in Thousand Palms, our Riverside County shelter.  They determined the male pup is a 28-lb Beagle/Pug mix, about 2-yrs-old, not neutered, nor was he microchipped.  No owner came looking for him.  Diane wondered if he belonged to a homeless person.  It is more likely an irresponsible owner kept him tied up in the backyard.  Unneutered male dogs are more likely to escape as they can detect a female in heat from miles away.

The dog the shelter named “Tom” was a perfect gentleman in the shelter lobby, friendly to everyone and the other entering animals.  Diane was dismayed he is now Code Yellow at the shelter due to kennel stress.  The website www.rcdas.org describes Tom “A bit fearful in the kennel; does ok with other dogs.”  Tom is available to a rescue group or to a private adopter.  Diane tells us Tom would make a wonderful companion.

While writing this article, I received another phone call about another stray dog, a female Shepherd mix, who was a friendly sweet animal while the finder waited for animal control.  At that point, the dog became frightened when captured and placed in a truck.  The county shelter is becoming very crowded, and the larger size dogs often become stressed upon confinement.  That dog is pictured here, a 2-year-old 50-lb pup, dog ID#A1664181.  Her stray hold is up, and she is now available for adoption. 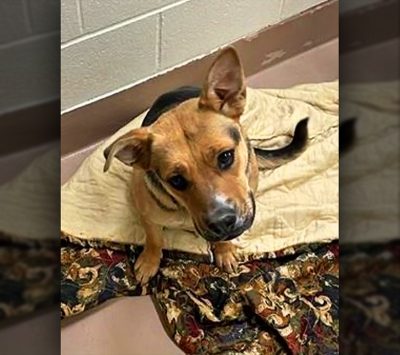 Please don’t blame the county animal control staff for the current situation.  Most of their staff are doing everything they can to get homes for the animals.  They have implemented programs, including a Big Dog Play Group in the new outdoor dog park.  Volunteers walk and help socialize them.  There is an overpopulation of animals, fueled by the greed of breeders, when there are not enough homes for them.  Irresponsible owners fail to spay and neuter their pets despite low-cost options.  Animals carelessly kept outdoors 24/7 escape due to boredom.  Litters of hungry, sick, and injured creatures roam our desert.

These two dogs are currently at our county shelter, the Coachella Valley Animal Campus (CVAC), located at 72-050 Pet Land Place in Thousand Palms, (760) 343-3644.  They deserve a second chance. The shelter is open 10am to 4pm Monday through Saturday when you can meet them and the 107 other pups there.  The shelter also has kittens and cats.  They welcome loving foster homes which would expand the walls of the shelter and help prepare animals for adoption.  If you can’t foster or adopt, consider volunteering.  Network the animals listed on www.rcdas.org.  Working together, we can make it a better world for these animals.