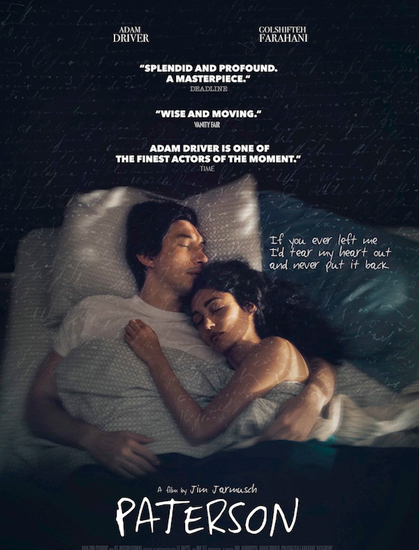 I loved this beautiful, satisfying and touching film. It’s easily one of writer/director Jim Jarmusch’s most accomplished, if not his best movie so far. In tone, structure and theme, there’s a sweet affection and sublime wisdom that permeates every frame. But what really sets the movie apart are the many moments of beauty and magic that exist in the midst of the mundane and ordinary.

Adam Driver is just about perfect as Paterson, a bus driver in Paterson, New Jersey, (yes, they share the same name).

Paterson’s daily routine may remain the same, but what he sees and hears as he makes his rounds is always fresh and different. He observes the city as it slides across his windshield. He overhears bits of conversation that float around him. But clearly, his passion is writing poetry into the little notebook he keeps handy. He walks his dog; stops in a bar and drinks exactly one beer; he goes home to his pretty, loving wife, Laura (Golshifteh Farahani). 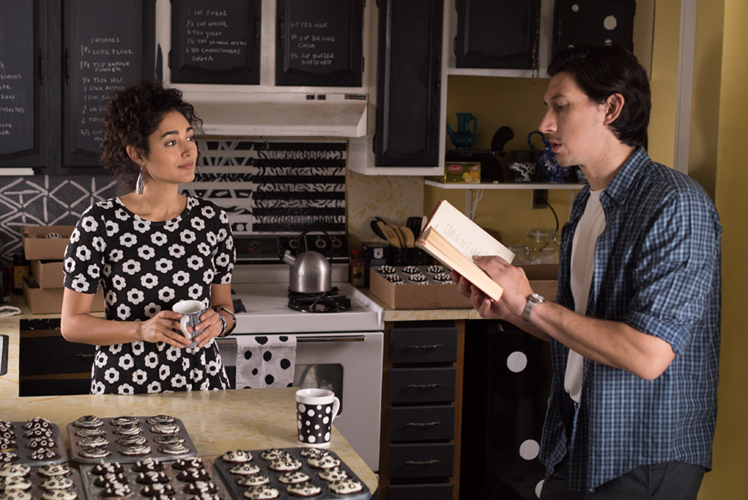 Laura’s life, by contrast, is rich with creative dreams, especially those that relate to the many ways she might apply her black and white art to their home environment. She’s teaching herself to play the guitar and sing – with hopes of making it professionally (in a self-designed black and white costume!). Paterson loves Laura and she loves him. He supports her creative ambitions and she champions his clear gift for poetry. I love the way the movie shows us the details of Paterson’s daily life that give rise to his sharply defined poetry that we see (in cursive) on screen and hear narrated by Paterson.

If there’s a theme here, it’s about the joys and rewards of mindfulness and living in the moment. Not a typical subject for the moves these days. To it’s credit, there’s no major action – well, there is one minor crisis at midpoint — or even an inciting incident that sets the story in motion, however, there are numerous moments of magic that happen around the edges of this beautifully told tale and there’s always a sense of romance and affection that rings true. It not only fuels the simple story but gives a layer of meaning and protection to the shared, creative lives of Paterson and Laura

I especially appreciated the natural rhythm to this film. It’s a nice reflection of the poetry it brings to life on screen.

Highest recommendation. Don’t miss this sweet, life-affirming film. It is among the best of the year. 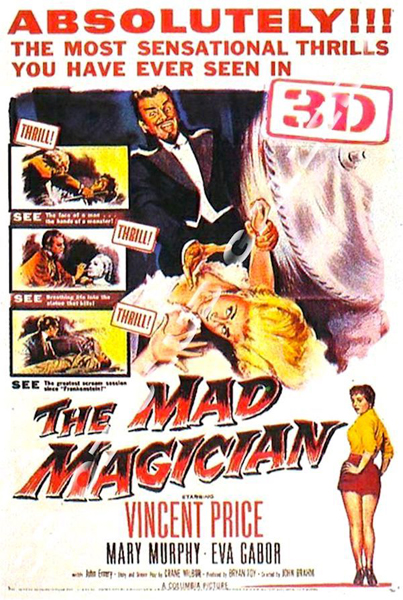 The terror is multidimensional as the incomparable Vincent Price plays a crazy unhinged prestidigitator whose illusions become instruments of bloody revenge. Here is one of the more fiendishly clever 3D movies of the 50s that makes its much anticipated 2D/3D combo hi-def Blu-ray debut. This vigorous little shocker (Time Out London) is guaranteed cheesy fun.

The 3D is crisp in stunning black and white! And Price is at his villainous best in one of his signature psychotic roles. Here he’s a magic trick inventor who loses it when fellow magicians rip off his act and his wife runs of with a younger rival. This was Columbia Pictures last entry in the 1950s 3D fad (that is still going strong!) Although this picture is clearly and delightfully tongue-in-cheek, it delivers some genuinely frightening moments, thanks to director John Brahm, one of Hollywood’s master stylists of the macabre. Twilight Time. Blu-ray 3D. 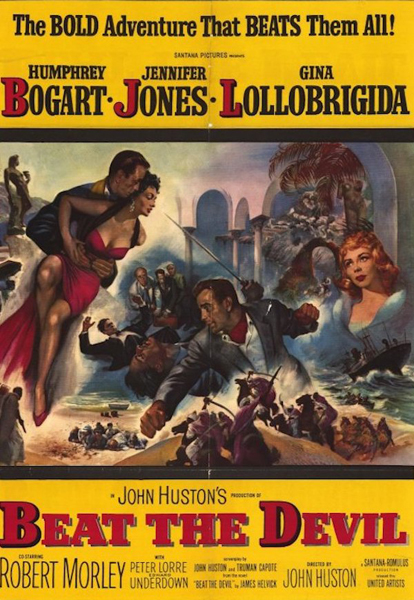 Writer/director John Huston’s adaptation of Claud Cockburn’s novel of the same name (Cockburn co-wrote the screenplay with Huston and Truman Capote. Peter Viernick worked on the script on an unaccredited basis). Humphrey Bogart leads an all-star cast as one of five rather seedy con artists who are trying to get uranium out of East Africa. Besides Bogart’s Billy Dannreuther, there’s snobbish fraud Robert Morley, and Peter Lorre as the German-accented “O’Hara”, whose suspect wartime record is a source of concern, speculation and doubt. Soon to get mired in Bogart’s machinations are the Chelms, a prim British married couple (Edward Underdown and blonde-wigged Jennifer Jones). The uranium seekers culminate their many lies, romantic betrayals, misadventures and double-crosses in front of an Arab firing squad.

When this film was first released (1953), its decidedly droll and satirical nature did not connect with a post-war American audience. The film failed at the box office but slowly gained cult status. Even so, actor Bogart lamented that he could only remember how much he lost when he invested in the project. The movie fell into public domain status and has been transferred and distributed by in less than the best quality. Beat the Devil eventually fell into public domain, leading to numerous inferior editions by second and third-tiered labels. There are reports of two versions for home video with different running times. One, mastered in 1954 with a RT of 53 minutes, and another distributed in 1989 with a running time of 100 minutes. I think the relatively minor difference is in the opening scenes.

Today, this fun film retains a strange power to envelope the viewer in a doomed con game in by a motley band of swindlers stranded in an Italian port town that can only go from bad to worse. The Film Detective. Blu-ray.