If you came of age in the late ‘60s, you probably remember how devastating it was when the Beatles broke up in 1970. Music fans around the world mourned the end of the Fab Four. But John, Paul, George and Ringo had been together almost a decade, they each wanted to stretch their wings and try new things. For the next 10 years music fans held their collective breath hoping for a reunion.  Unfortunately, that door closed permanently when John Lennon was murdered by a narcissistic douchebag in 1980.

These days, bands don’t so much break up as take a break from each other. By pursuing other interests, they satisfy different creative urges, returning refreshed and enthusiastic about their original partners. It’s almost like an open musical marriage. That’s how the Posies have been doing it since they formed in 1987. It’s a method that seems to work, because they’re back after a six year hiatus with a gorgeous new record, Solid States.

Back in the late ‘80s, most of the music emanating from Seattle and surrounding cities was an odd mutation of Punk and Heavy Metal. Musicians were influenced by Black Sabbath and Black Flag in equal measure. Bands swathed Punk anthems in a blanket of sludgey instrumentation.

Of course, in 1991, the scene, now known as Grunge, would explode.  Nirvana, Soundgarden and Pearl Jam emerged as the movement’s holy triumvirate. Pretty soon, any music from the Pacific Northwest was automatically considered Grunge.  One band from Bellingham defied expectations by consciously declining to fly the flannel banner of this developing genre.

In late 1986, teenagers Jon Auer and Ken Stringfellow met at a Dan Reed Network concert. They bonded over the notion that any music they created together would be better than what they had just seen. The following summer they made their live debut as an acoustic duo.

Although Ken was matriculating at the University Of Washington, he would drive home on the weekends, joining Jon in his family’s home studio. For the next several months they wrote and recorded songs, shaping the demos to attract other musicians to their cause.

Drummer Mike Musburger and bassist Arthur “Rick” Roberts signed on, and the Posies were officially a band. By the end of 1988, the four-piece released the Power Pop gem, Failure through respected indie label, PopLlama.

Their debut attracted enough buzz that major labels came calling.  The band signed with DGC, a new imprint of the Geffen label. John Leckie was recruited to produce their major label debut. Having worked on projects with John Lennon, George Harrison and Paul McCartney, (“Three out of four Beatles recommend”) as well as Syd Barrett, Be-Bop Deluxe and XTC, he seemed like the perfect choice.

Dear 23 appeared at the end of 1990, and was as buoyant and chiming as their debut. For the rest of the ‘90s, the Posies just seemed to get better and better. 1993’s Frosting On the Beater refined their more Baroque qualities. Following that record, Brian Young replaced Mike behind the drum kit and and Joe Howard (a.k.a. Joe Skyward) took over bass duties.  Their third effort, Amazing Disgrace from 1996, added hints of Punk and Metal to their kaleidoscopic sound.

In the midst of this, Jon and Ken began moonlighting with Big Star’s Alex Chilton and Jody Stephens, playing Big Star gigs and even recording the Big Space album together. This commitment continued sporadically until Chilton’s untimely death in 2010.

Unfortunately, DGC was never satisfied, so the Posies returned to PopLlama in 1998, releasing the wryly titled Success. After that, the band took a break, as Jon and Ken concentrated on other music projects and solo albums.

At the beginning of the 21st century, the band compiled At Least, At Last, a four CD box set that included rare outtakes, demos and cover songs. DGC responded with a greatest hits package entitled Dream All Day.  Albums of new music began to appear, Every Kind Of Light in 2005 and Blood/Candy in 2010. 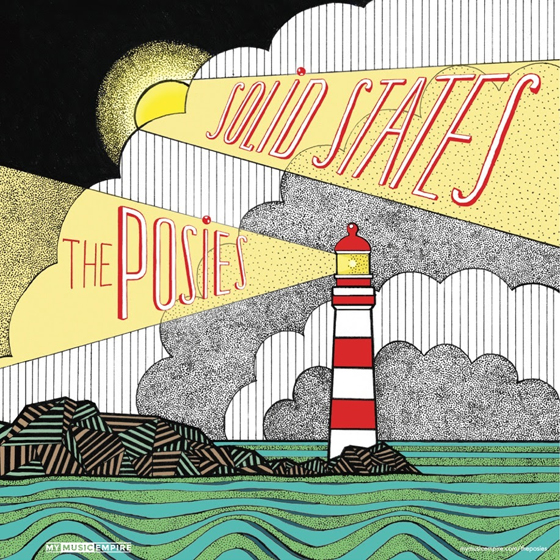 Although the nucleus of the band has always been Jon and Ken, since 2001 Darius Minwalla has been their permanent drummer and Joe Skyward has been the Posies off-and-on bassist. That changed in 2015 when Darius died rather unexpectedly. Joe, who was battling prostate cancer lost his fight just two months ago. Illness and sudden death certainly colored all aspects of their newly released album, Solid States.

The opening track, “We R Power” careens out of the speakers at full gallop. Distant drums gather speed as fractious guitars and stabbing, mad scientist keys dart through the mix. The frenzied instrumentation almost camouflages lyrics that insist we can control our own destinies; “Privatize freedom you hand them your own gun, and let ‘em take us all one by one/…If we resist to the final hour, we are power.”

Since their very first record, Jon and Ken had a knack for creating memorable, hook-filled melodies, but they have also proven themselves to be erudite lyricists. Labyrinthine wordplay can go one of two ways, it can seem smug and overly clever (think Barenaked Ladies, Crash Test Dummies), or it can be dazzling and succinct (think Cole Porter, Squeeze and Elvis Costello). The Posies fall into the latter category.

Take the opening couplet of “Titanic.” “Perfect pose, glasses colored rose, and what it’s like nobody knows/like filling an ocean with a garden hose.”  Over a triple time ricochet rhythm, pinging synths, sunburst guitars and ethereal harmonies, they offer a swift indication of a floundering relationship that seems faultless on the surface. The capsized cruise-liner makes for a trenchant metaphor.

“The Plague” is powered by spiky guitars, whirligig percussion and a stop-start melody. The lyrics offer a pithy take on the adage that absolute power corrupts absolutely. “Presidents take their masks off, catching drops as the money man jacks off, make-up covers all the boils/From the time of the old Justinian, to the plains wiped clean of Indians, empire requires blood, slaves and soil.”

The ambitious first single, “Squirrel Vs. Snake is cloaked in a jangly melody anchored by a stuttery back-beat and pastoral acoustic guitar.  Here, the lyrics rail against false advertising and false prophets. “Every advertiser needs you to believe it, telling you why you should keep holding on/Blow by blow they sell you sand from an empty hourglass, the road to heaven is now paved and Jesus has saved/A headliner we all know for the holy halftime show, Turin vs. shroud.”

The catchiest tracks here are “Unlikely Places,” “The Definition” and “Scattered.” The first two mine the sounds of early ‘80s New Wave. Chilly synths collide with rubbery guitars and a hand-clap rhythm on “Unlikely Places.” The lyrics limn the heartache of missed connections; “Well, there’s a time when the stars align, and your wrong is gonna right/Or maybe not, maybe all we got left is a thought, or some fight.”

“The Definition” is slinky and seductive. A tick-tock beat, slithery bass lines and fuzzed-up guitar riffs dance around a mesmerizing melody. Cryptic lyrics warn against a bewitching temptress.

Meanwhile, “Scattered” is a shimmery ‘60s delight. Fey synth figures are wed to a hiccup-y beat. The lush harmonies split the difference between Pet Sound sunniness and Lucy-In-The-Sky psychedelia.  Guitars ring and chime on the instrumental break.

Other interesting tracks include the forboding “M Doll, which warns the world has become “the dystopia of the free.” Meanwhile, “March Climes” is powered by strummy guitar and squiggly synths.

The final three songs, “Roller Coaster Zen,” “The Sound Of Clouds” and “Radiance” form a suite of sorts that attempts to reconcile the untimely death    of Darius Minwalla along with the terminal illness of Joe Skyward. “Roller Coaster” is equal parts dreamy and melancholy.  The sweet melody and tinkly instrumentation belie mournful lyrics. Watching a friend succumb to illness, (“I’d do anything to keep you alive”), they offer a tender pledge; “I’ll keep you alive and keep on keepin’ on.”

“The Sound Of Clouds” is a gauzy ballad propelled by dissonant, Lennon-esque vocals and delicate piano arpeggios. Here, the perspective is flipped, as Jon and Ken imagine their deaths close at hand. Simultaneously dreading and longing for peace at last. “Love- keep me tethering, I long for completion/…Take my fragile hand, and walk toward unknown pleasures.”

Finally, “Radiance” walks a knife’s edge of acceptance. An ethereal slice of psychedelia, it echoes the experimental spirit of Fleetwood Mac’s “Tusk” and the more commercial overtones of Electric Light Orchestra’s “Out Of The Blue.”

Instead of relying on the Power Pop paradigm the Posies redefined in the late ‘80s, they revamped and recalibrated their sound.  By adding new colors and textures to their sonic palette, Solid States yields unexpected pleasures.