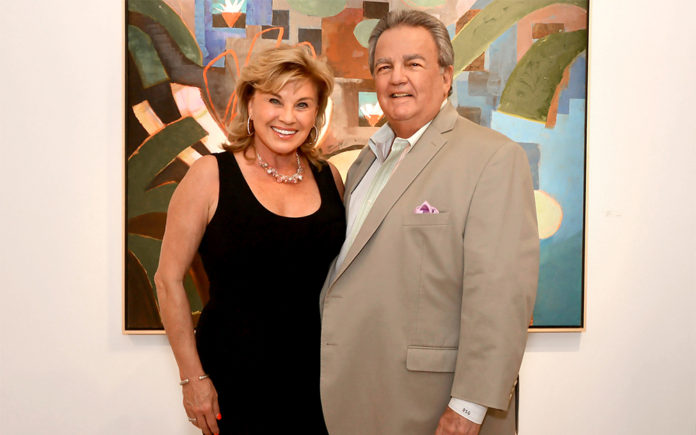 Dale and Patti Gribow have been a Power Couple for 34 years (married for 33). Dale is originally from Chicago and moved to North Hollywood/Toluca Lake at age 7, followed by living in Brentwood and North Hollywood. Patti was born in South Bend, Indiana as Patricia Jane Pivarnik and moved to Cincinnati at age 3, where she lived until she was recruited into the Golddiggers, as a member of a song and dance team who worked with Frank Sinatra and Dean Martin on the Dean Martin Show, in the mid 1970’s. 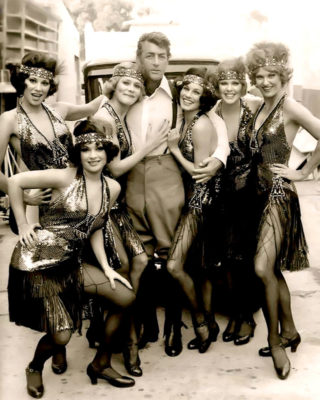 The couple met in Beverly Hills when Dale was President of a Bachelors Group. “Carmine Riccio was a member that I doubled with a lot,” shared Dale. “One day he looked at me and said Paisan, ‘which one is this?’ In those days my girlfriends were all pretty with dark hair and petite. He said ‘when you are ready to settle down there is a nice girl in Dean Martin’s Golddiggers who is single and is Captain of the Group.’ I called and we spoke on the phone for a few hours and then met at a monthly Thalians Meeting I was leading at Carlos and Charlies. However, I had a hard time finding Patti because she had died her hair blond for a movie. I have never seen her with dark hair.”

Patti adds to the story:  “Carmine was engaged to my girlfriend, Maria Alberici, also in the Golddiggers and she knew I was looking for a professional partner with whom to share my life.  Dale called me and we laughingly say that he as an attorney interviewed me for an hour. Actually, it was a great thing we spoke for such a long time, as we knew of some of our commonalities prior to meeting. The four of us went to dinner at the private night club Touch, in Beverly Hills and the rest is history!”

The Gribow’s have a lovely daughter, Gina, and a dog named Bella.

They are very involved in the community and have served on many boards over the years. 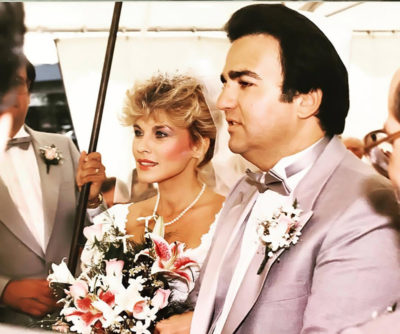 “In Beverly Hills, when I met Patti, I was President of several non-profits at that time, and on the board of directors of about 20. When there were major events Patti would help and it got to the point where she was doing most of the work and enjoying it,” said Dale. “We both chaired the Thalians Annual Black Tie Ball twice, for over 1100 people each time. In the Thalians, I was Executive VP and if Debbie Reynolds or Ruta Lee did not chair our monthly events then I did…for many years.”

“When I was honored with one of the Man of the Year Black Tie events, Patti chaired it and our daughter Gina, who was 6 years old at the time, led the audience in the Pledge of Allegiance. Because of their respective involvement with non-profits, both Patti and Gina have each been President of many non-profit groups,” shared a proud Dale.

“When we moved to the Desert we both were involved with the Children’s Discovery Museum, and on the Board of Directors of the Palm Valley School,” shared Patti. “Dale was immediately selected as President of the Institute of Critical Care Medicine 911 Plus. His job was to get AED’s in Country Clubs and restaurants and he was very successful.”

Whew! That’s quite a list of accolades. So how did Dale get his start? 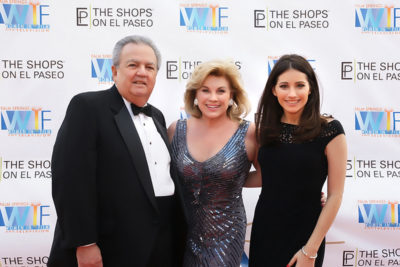 “I spent the first 4 years after Law School as a Deputy Public Defender (because at the time it was harder to get into than the DA’s office). I then started my own firm which grew to a 30 person firm at Wilshire and Little Santa Monica. In 1994 we moved to Palm Desert for a better place to raise a family. I tried to commute back and forth and missed my wife and daughter during the week. Then I started coming here on Thursday nights and staying until Monday and Tuesday,” shared Dale. “Missing my family, I decided to retire young and got every employee a job before I closed the office. Not being a golfer and living at Bighorn there was not much to do so I started all over again in Palm Desert and grew my firm to 17 people a few years ago.”

Patti has started many businesses or been involved in many over the years. “Life is not static, so I have used my skill set and have grown my skill set to fill many positions in life. As a singer, dancer, actress, I used those things I learned in school and over the years as a performer. As host of my own TV talk show, I used my journalistic skills as a writer for magazines,” shared Patti. I also owned a Speakers Bureau where I booked talent such as motivational speakers, celebrities and authors.  That dried up after 9/11 when no one was flying. I have always been philanthropic, but learned skills in fundraising and publicity as a Director of Development at Palm Valley School. Given all of these opportunities and diligently working at them, gave me skill sets that now benefit me as a Realtor.”

Her new venture as a Real Estate Agent is already quite successful in a short period of time.

“I am very fortunate as being a Real Estate Agent for me is like walking. I am so fortunate to have hit the ground running, as people whose trust I have earned in my 20 plus years living and working here  both on camera  and television  production, combined with my philanthropic efforts, have chosen me as their Realtor. In addition, I am a member of my dear friend, Valery Neuman’s team at HK Lane/Christies. Her stellar reputation as the top Desert Broker is a gift!”

Patti believes that service to the community is not a choice, but an obligation. Her advocacy for women has earned her numerous awards including a Palm Desert Athena Award, Women Leaders Forum Lifetime Achievement Award, and the George Berkey Palm Desert Citizen of the Year Award. She has been honored by Soroptimist International of Palm Desert-Sunrise, and the National League of American Pen Women.  In addition, she has served as a Member of the Board of Counselors for the University of Southern California’s School of Dramatic Arts. She was also one of CV Weekly’s Top Women of 2013. Currently, Patti is Past President of Palm Springs Women in Film and Television and the Ophelia Project, which she founded. She is also past President and currently on the Advisory Board of Women Leaders Forum.

With both Patti and Dale being so successful in their careers I wanted to know how they balanced raising their daughter and having time for their relationship.

“In Beverly Hills, I would walk to Gym Time to be with Patti and our daughter and then go to lunch with them. I attended every school event but one from grammar school up to Gina’s Valedictorian speech in High School,” shared Dale. “We have dinner as a family every night and we took Gina on all but 1 vacation in 20 years. For both of us everything revolved around our daughter….i.e. Helicopter Parents.”

“I turned down a position on a TV station as a Hollywood reporter when we moved to the Desert, because I wanted to be at home with Gina and Dale at night. When Gina was a preteen I was offered a position as Director of Development at Palm Valley School, which was a blessing as my hours were her hours at school.  For me, Family First, anything else second!” insists the proud wife and mother.

The couple also attends many local events together. It’s rare to see one at an event without the other.

“We both love seeing so many friends at ‘one time’ at each party. In addition, by attending so many events we get ideas to implement for our personal favorite charities over which we preside…and I like the desserts!” laughed Dale.

“We are soul mates who are driven to fulfill our mission of helping others. I feel we are both strongly committed individually, but can make a dynamic difference together,” shared Patti. 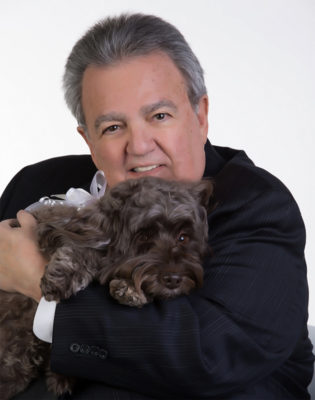 While Dale and Patti have their own offices, unless they are meeting clients, they both work out of their offices at home. Thus each having to respect the others space. “Dale is a night person and I am a morning person, so respecting each other’s habits is very important,” shared Patti.

When they aren’t working or attending events together the couple enjoys dressing up and dining at a fine restaurant, going to a movie, or listening to jazz, and of course, traveling to Hawaii.

Separately, hobbies for Dale include watching TV and reading and of course watching every USC Football Game is a must. Patti enjoys cardio exercise and yoga, walking their dog Bella, enrichment classes and professional seminars, reading, working on entertainment projects as a producer, and spending time with her girlfriends!

When I asked what they feel their partner’s best traits are Dale replied: “Patti is always up and happy and wakes up with her great smile. She is always positive and is prettier on the inside than the outside.”

“Dale is a fierce and loyal friend and stays in touch with people he has known since Grammar School. He is loving, kind, thoughtful and my bestie!” boasted Patti.

I asked what their favorite gift from each was. They both simultaneously replied: “Our daughter Gina!”

What do they feel is the most important thing that keeps their relationship solid?

“There is no question that Patti for 34 years has been the glue to our relationship. She taught me, what she learned from her parents, and that was to never go to bed angry. She will say ‘get over it buster’ and give me a kiss good night!” shared Dale.

“Unconditional support, and recognizing that there are times I give more, and other times that Dale gives more,” insisted Patti.

Obviously this couple is in it for the long haul!