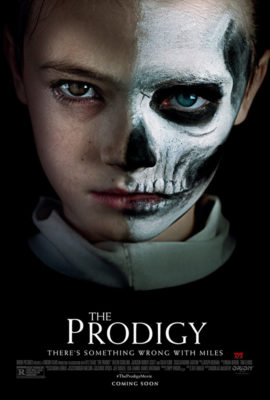 Sarah and John Blume are thrilled when their young son Miles starts to show signs of rapid development and extreme intelligence.  But their family bliss soon turns into a living nightmare when Miles’ behavior becomes increasingly erratic and violent by his eighth birthday.

Sarah (Taylor Schilling) seeks help from two experts, and is horrified to learn that her beloved son may be under the grip of a malevolent force.

If you’re a horror fan in search of a new cinematic evil child to fear, this might be worth a watch.

Fearing for her family’s safety, Sarah must choose between her maternal instinct to love and protect Miles and a desperate need to investigate what — or who — is causing his dark turn.

When she is forced to look for answers in the past it’s a wild ride where the line between perception and reality is maddeningly blurry. 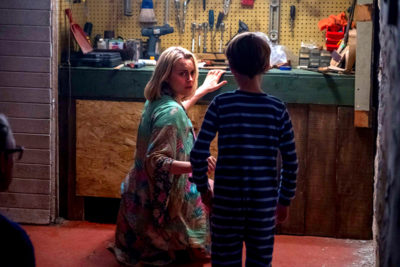 Director Nicholas McCarthy and screenwriter Jeff Buhler recognize that the buildup is usually more fun than the payoff.

I didn’t mind the stock scare tactics – the whistling tea kettle, the dark hallway, the creepy basement and so on.  I was hoping for an electrifying third act payoff that really jolted – but alas….

As reincarnation-horror movie, it’s finally more irritating than scary.  Just having a demonic kid do violent adult things for 90 minutes is not enough to sustain serious suspense.

The debut film of Swedish-born writer-director Isabella Eklof looks with an unflinching gaze into a world of violent, power-mad gangsters, and the women who exist as their disposable ‘toys.’

Victoria Carmen Sonne shines in a subtle tour-de-force turn as the young and beautiful Sascha who discovers her dream life of luxury, recklessness and fun comes at a price when she is welcomed into the “family” of her drug lord boyfriend at his holiday villa in the port city of Bodrum on the Turkish Riveria.

Physical and psychological violence are a way of life for this gangster family, but when the velvet veneer is stripped raw to the bone, Sascha’s mind drifts towards the “normal” life she is leaving behind –- can she still be accepted by polite society?

As a morally repugnant and shocking piece of work, it is never the less strangely alluring and provides food-for-thought to adventurous filmgoers. 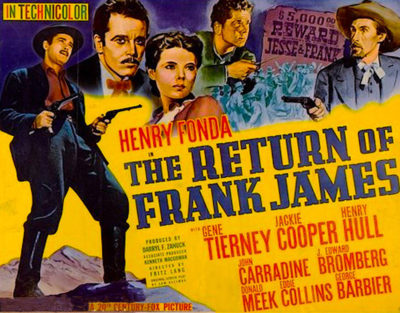 A sequel to Henry King’s 1939 Jesse James, The Return of Frank James is, significantly, directed by the one and only Fritz Lang, his first western.  Even more significant, it stars Henry Fonda as an otherwise good-hearted man bent on avenging the death of his brother at the hands of Bob and Charlie Ford (John Carradine and Charles Tannen).  Beautifully shot by George Barnes, highlighted by a score from David Buttolph, and featuring the screen debut of the sensational Gene Tierney.  Twilight Time Movies (limited edition of 3,000 units)

SO DARK THE NIGHT 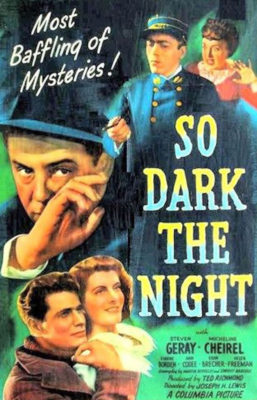 Like his contemporaries Howard Hawks and Billy Wilder, director Joseph Lewis (Gun Crazy) dabbled in many genres, but excelled in the film noir tradition.  This Hitchcockian tale of mystery and intrigue was one of his best pictures. Inspector Cassin, a renowned Paris detective, departs to the country for a much-needed break.  There he falls in love with the innkeeper’s daughter, Nannette, who is already betrothed to a handsome local farmer.

On the eve of their engagement party, the farmer and Nannette both disappear!  Cassin immediately takes up the case to discover what happened to them and who is responsible.  Lewis elevates this twisty, pulpy material with some of the best noir tropes the genre has to offer, beautifully shot by Oscar© winning cinematographer Burnett Guffey (Bonnie and Clyde).  Arrow Films.  Recommended.