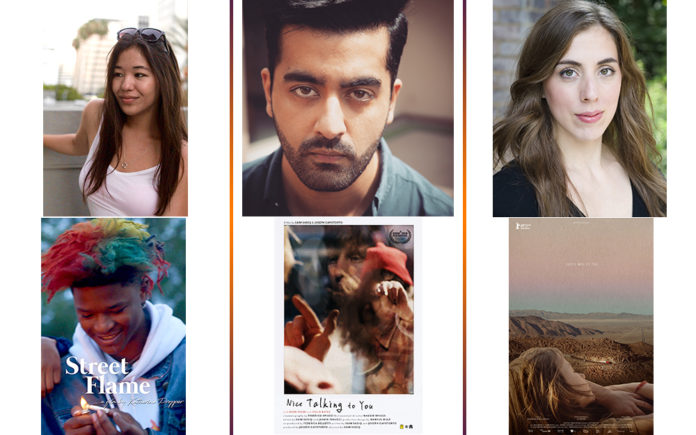 Acme House Company is providing free housing, and a food and transportation stipend to 11 filmmakers for the duration of the festival.

A Platinum Sponsor of the 2019 Palm Springs ShortFest, Acme is expanding on the Film Society’s mission.  Acme states it is committed to empowering emerging storytellers to pursue their artistic goals and to cultivate the passion of filmgoers – ensuring that the next generation has access to the riches of global cinema.

“Living with other filmmakers facilitates an exchange of ideas with people of different walks of life,” said Kathrine Propper, an MFA film production student at the University of Texas, Austin. “I think it’s a great learning experience to be in conversation with filmmakers in similar stages of their careers.  I’m really grateful to spend time with other filmmakers from all over the world during this residency. Being around fellow artists inspires me.”

Propper heard about the ACME House Artists-in-Residence soon after she found out her film “Street Flame” was accepted into the Shortfest.

“I saw a Facebook post in the Palm Spring Shortfest filmmakers group. This residency enables me to be part of an artistic community, which is a special way to experience the film festival and a new city. I also feel incredibly supported as a traveler attending the Palm Springs Shortfest for the first time.”

“I wanted to make a film about youth like them because I find so much beauty in their seemingly rough and tumble world— in their striving for landing the best skate trick, their graffiti’ing an otherwise dull cement ditch, and in the way they create fun even in tough circumstances” said Propper.  “The film celebrates the rituals these kids imagine as they cope with the death of their friend.”

During ShortFest, Propper is enjoying the swimming pool and iconic Palm Springs views.  She will be at the screening of “Street Flame” which is part of the Departures program, Saturday, June 22, 3:15.

Saim Sadiq is the director and writer of “Nice Talking To You” which is part of the Brief Encounters program Saturday, June 22, 10:00am.  He heard about the Artist in Residence by email sent to all of Palm Springs official selection filmmakers.

“I have lived with filmmakers while I’ve been in New York and its an amazing experience for me especially because you immediately have a great point of connection with your housemates,” said Sadiq.  “If you gel with each other, it often translates into work collaborations and it fosters an environment where you start seeing those fellow filmmakers in a more honest and nuanced light.  You see them living their life and can connect that to their work and what they want to do with their films.  It’s an interesting exercise in observing fellow artists and getting a little organic window into their process.”

For the past four years, Sadiq has been living in New York while attending Columbia University.  He spends time between New York and Lahore, Pakistan.

“My film is a quiet romance in sign language set in New York City, which is perhaps the loudest city in the world,” said Sadiq.  “It’s an intimate window into an ephemeral romance that explores communication challenges in a way we haven’t seen before in film. Ultimately, it showcases something like sign language and the idea of deafness without painting it as pitiful but instead embracing what it has to offer to us hearing folk in this day and age where all of us seem to be talking but no one seems to be really listening.”

As a filmmaker, Sadiq says: “I think the best part about this artist in residency is that you get to attend the festival without worrying about your economic restrictions and about stay and travel which can be quite expensive and lead to many of us not being able to avail these opportunities. Apart from that, sharing living space with fellow filmmakers who are so different from you in every way is both humbling and enriching if you allow it to be.”

Sandrine Brodeur-Desrosiers is from Montreal, Canada.  She has a BFA in Film production from Concordia University, an MA in acting at Drama Centre (University of the Arts London, Central St-Martin’s) and a professional certificate in feature writing at l’INIS.  She is the director of  “Juste Moi Et Toi” – “Just You and Me” screening as part of the On The Road program Saturday, June 22, 6:00pm.

“This residency is an amazing opportunity for me to attend. Otherwise, I’m not sure I could’ve afforded this trip,” said Brodeur-Desrosiers. “Furthermore, it gave me a good standing in the eyes of the financial institutions in Quebec, and I was offered a grant that will cover the plane fares. I also expect an amazing human experience being paired with great filmmakers. This allows me to discover their work and as human beings! I’m very excited to be in Palm Springs for the first time. I think it will teach me more about the US film industry.”

Brodeur-Desrosiers loves the idea of “living” in Palm Springs and attending the festival with other filmmakers.  “We will surely have different agendas at the festival, but being hooked up with some people already creates a great synergy,” she said.

“‘Just You and Me’ is a story about a father/daughter road trip in an 18-wheeler truck. They are traveling from Montreal to Mexico. The trip doesn’t go as expected for the 8-year-old daughter,” said Brodeur-Desrosiers who will be attending her screening.

Acme House Company manages more than 130 privately owned vacation home rentals in Palm Springs and the surrounding desert cities of the Coachella Valley.  They are noted for providing 5-Star Guest Experiences at architecturally significant midcentury pool homes with ties to Old Hollywood and the Movie Industry including The Lions Gate Estate, The Kirk Douglas House and Villa Carmelita – The Sonny and Cher House.