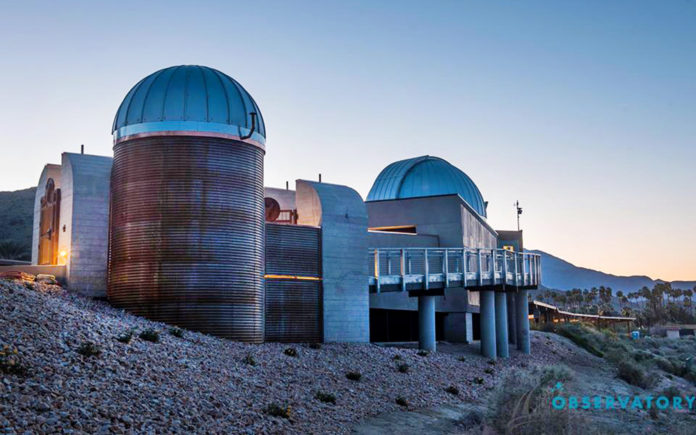 Sunday afternoon, less than a week after the Spring Equinox, over twelve hundred people – young and old — gathered beneath the brilliant blue firmament with a white waxing gibbous moon 238,900 miles away visibly hanging above the Rancho Mirage Library & Observatory, and watched in awe as the clean aluminum dome rotated and opened to the cloudless desert sky.

“Today, we enjoy a perfect convergence.  A fantastic city, its great library and the incredible new observatory,” said David Bryant, Director Rancho Mirage Library & Observatory.  “We celebrate for many reasons.  Our eyes watched it from a concept to what stands before us today.  Now, it will let our eyes see into distant galaxies in our universe.”

Built along the edge of the White Water wash on highway 111 adjacent to the award-winning library, the Rancho Mirage Observatory is an exciting addition to the Coachella Valley.

“Rancho Mirage has the only observatory at a public library in California.  There are no limits to Rancho Mirage’s spirit,” said Bryant.  “This observatory represents a vision.  It also represents strong intellectual values.  Life-long learning is our mission.  All ages and interests can find a home at our observatory and library.”

“Educators have given us a decade of STEM – Science, Technology, Engineering and Mathematics.  Ladies and gentlemen, this is what stem looks like at Rancho Mirage public library,” said Bryant to enthusiastic cheers and applause.  “For ten years, I’ve called our library a house of ideas.  Now the house of ideas has a young new neighbor.  A House of Stars, bringing nightly views of the sky and its light.”

Just a few years earlier, Marilyn Bauer, a Rancho Mirage resident had a flashback at a city planning meeting.

Bauer, who grew up in Canada, loved to visit the McLaughlin Planetarium in Toronto.  Thinking about how special the trips to the observatory were for her, she made the suggestion to build one here in the valley.

“The idea just popped out,” said Bauer.  “There is no age or gender discrimination with an observatory.  It is something everyone can appreciate and enjoy.”

Councilmember Dana Hobart heard Bauer’s voice that night and at Sunday’s observatory dedication presented her with a plaque of appreciation reading the inscribed: “To acknowledge her inspiration for an observatory to expand our own understanding of the universe and to enhance the intellectual life of Rancho Mirage.”

Bauer graciously accepted the recognition. “My motto is, you reach for the moon and you get a few stars, but this is more than I ever imagined,” said Bauer “Have fun and an adventure with your friends and family.  To everyone in the city and cities beyond, embrace it.”

Also receiving a plaque was Dan McKenna, formally of Mount Palomar Observatory, who helped champion and direct the project.  With Palomar for 11 years, McKenna is now a professor at California Institute of Technology.

Rancho Mirage Observatory is hoping for an arrangement with Cal Tech to take advantage of the city’s new telescope.

McKenna’s plaque was inscribed with: “In appreciation of Dan McKenna Superintendent of Mount Palomar Observatory and California Institute of Technology for the guidance through the universe and this remarkable project.  Harvest its starlight and convert it to knowledge.”

“Our spirits are so lifted to see the interest and enthusiasm for this project,” said McKenna.  “It’s gone from a task of building an observatory to now the fun part.  What are we going to do with it?  How can we, in the same way that we defied convention by building it, continue this effort to make it the most extraordinary public observatory on the planet at this time and the best ground based facility for the public?  This is the exciting part.”

McKenna added, “With this telescope, not under the pressures of the academic committee, but in concert with the academic community to help mentor, and bring out those who wish to express their creativity by understanding more of the universe and those who really just want to get acquainted with the place that we hold.”

Sharing his concern about light pollution, McKenna deputized everybody present to be an ambassador regarding light efficiency without affecting the environment.  He encouraged the audience to be aware and ask:  How much light do we need, when do we need it, and where do we need it?

“It is the mission of this library and observatory to inspire and enable everyone to pursue knowledge and learning throughout their lives,” said McLaughlin.  “With the opening of this observatory, a new path into this facet of knowledge and a new gateway into understanding … has been completed.  The observatory’s cutting edge optics and automation allows for the imaging of billions of stars with a push of a single button.”

Within the large dome there is a state-of-the-art CDK 700 PlaneWave Telescope with an optical diameter 700mm mirror (27.56 inch).  Images taken from the telescope will be rapidly available inside the observatory, in the main library and via the Internet.

The observatory is equipped with a sophisticated weather station and an array of monitors.  The telescope can be operated remotely from anywhere in the world.

The dome is referred to as the “Cosmic Office.”  From the street, there are two visible domes.  One houses the telescope while the other is purely aesthetic — housing a bathroom!

The efficient and compact facility is constructed of natural materials that include Brazilian hardwood, custom cement, steel and stone.

A variety of new programs will be available beginning in April.  The observatory will host stargazing events, special guests and features, while also building relationships with local schools, clubs and surrounding communities.

The observation deck has four sensor-sensitive stabilized pads equipped with electrical connections for personal telescopes with computerized systems.  Anyone with a telescope will be able to view, record and process images.  The Rancho Mirage library is acquiring additional telescopes including a solar telescope for viewing the sun.

Through the use of Rancho Mirage telescope, McLaughlin expects to see many people with a burgeoning interest in astronomy.

“There is a variety of ways in which one can express the wonder that they have experienced here,” said McLaughlin. “I look forward to seeing you.”

Keynote speaker Rick Armstrong, son of astronaut Neil Armstrong, spoke about his life living with a dad who walked on the moon.

“It was my dad’s job,” said Armstrong.  “As a kid, it all seemed normal to me.  Lots of people in my neighborhood worked for NASA.  I was 11 years old, and I didn’t realize how interested the rest of the world was, and how much inspiration the space program provided.  I do now.”

Armstrong shared the vivid memory of a nighttime launch that illuminated the sky like it was day saying no photographic images could capture the moment he witnessed.  He added how much his father would have appreciated the city’s observatory, and wished the city and community every success.

Rancho Mirage Poet laureate, Dorothea Bisbas delivered her poem specially written for the occasion, “We Are All Made of Stars” transporting the audience into the vast and beautiful universe with her transcendent and magisterial verse.

To bring the presentations to a close, Gerald Collucci sang the timeless, powerful and moving love song, “Fly Me to the Moon.”

City Councilmembers cut the ribbon to the observatory and tours were given until 4:00pm.  Moon Pies and Space Ice Cream were served to the lively music of The Ken Dahleen Jazz Quartet.

The Rancho Mirage Observatory is the first of its kind research level facility in the Coachella Valley and will provide an opportunity for experts and novices alike to explore the universe.

“Today, our observatory and telescope have changed Rancho Mirage and the Coachella Valley forever,” said Bryant. “We celebrate the universe together!”