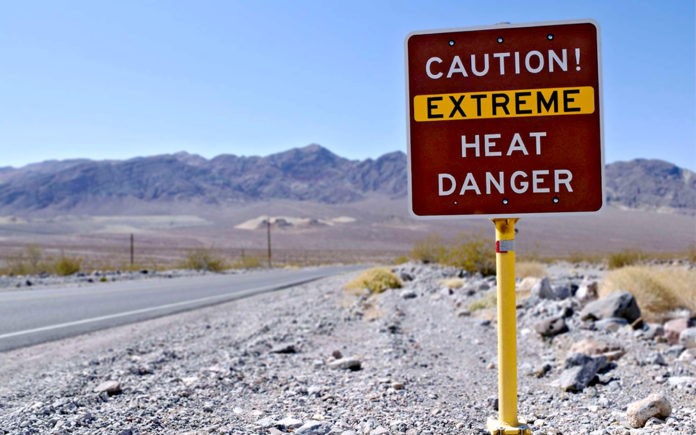 What can be hotter than the Coachella Valley in the summertime?

While we were reaching the 115 levels last week, the hottest place on Earth was a mere 5 degrees higher in Iran at 120 degrees.  In return for living in paradise for months on end, we get to live in the devil’s oven for a few weeks every year.  In comparison, the people of Iran don’t have recreational cannabis, Instagram or freedom of speech.

Want to visit somewhere hotter than here this summer?  Better yet, there must be someone you’d like to send there.  Have them visit sunny Death Valley (population 320), 240 miles to our north and home to the hottest place on Earth.

While we spend most of our days hiding from the afternoon heat, Dome A in Antarctica have a larger challenge.  When we were hitting nighttime lows in the mid-80s, their nighttime lows were 171 degrees below us at 91 below zero!  While the world’s average temperature was 60 degrees, the high and low temperatures spanned 211 degrees.

According to the National Center for Environmental Information, the month of June was the fourth hottest since 1880 at 60 degrees which was 1.5 degrees above normal.  The four hottest Junes on record have all occurred since 2015.

Moving beyond the weather, what is the hottest thing to ever to exist on Earth?

Seven years ago in San Mateo, scientists heated a piece of aluminum to 3.6 million degrees Fahrenheit at which point it evaporated.  They did this as part of a study of plasmas at the National Accelerator Laboratory.

The center of a nuclear explosion gets to a very uncomfortable 212 million degrees Fahrenheit or nearly 8 times the temperature found at the middle of the Sun.

As hot as all of that is, nothing compares to the heat created at the CERN Large Hadron Collider near Geneva, Switzerland.  It was here that scientists smashed lead ions together creating what they believe was a re-creation of the first elements of the universe following the Big Bang.  The temperature created by this ionic collision was 9.9 trillion degrees.  While I trust their number, this really seems like the kind of exaggerated statement you might get from an evil supervillain.  Given that it happened in the mountains outside of Geneva…

For those unfamiliar with the Big Bang Theory, it not only refers to one of the most successful US television shows in history, but it also refers to theory as to how the universe got started.  Scientists theorize that everything in the universe was once crushed so tightly together that it was no bigger in space than the size of the period at the end of this sentence.  I’m not kidding.  I don’t think that they’ve figured out why everything would be so tight.  I’m also not sure if they were experimenting with LSD or magic mushrooms but it is a bit of a crazy thought to think that one lonely speck on the end of a sentence was once everything.  That kind of says it all and nothing all at once.  Anyhow, with everything being packed so tightly, it got really, really hot and one day just exploded.  About 13.7 billion years later, here we are.

No summer discussion of heat is complete without an homage to the chile.  The hottest pepper in the world is 200 times hotter than a jalapeno and twice as hot as the Ghost Pepper.  Called the Carolina Reaper, it lives up to its name as this nasty little chile has a 2 million SHUs or Scoville Heat Units rating.