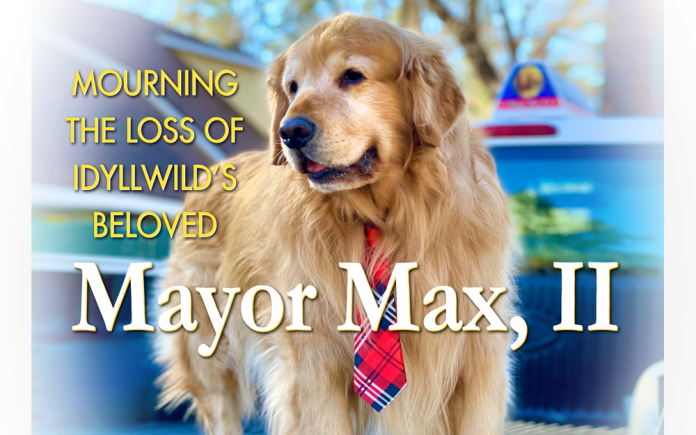 Residents of the town of Idyllwild and the Coachella Valley area are mourning the passing of one very good boy. On July 30, Mayor Max, II (Maximus Mighty-Dog Mueller, II) passed away after a brief medical issue, leaving behind a nine-year-long legacy of love and compassion while governing the non-incorporated Idyllwild community. 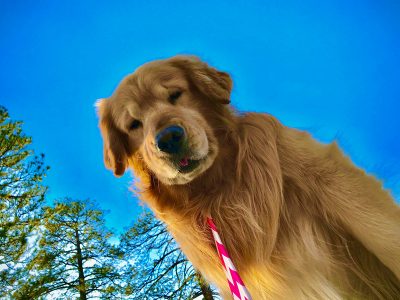 A friendly, handsome golden retriever often adorned with a tie and hat at his public appearances, Mayor Max, II was a famous figure within Idyllwild, promoting a campaign of unconditional love and a determination to do as many good deeds for others as possible.

Mayor Max, II is survived by his Deputy Mayors, Mikey and Mitzi, along with his Chiefs of Staff, Phyllis Mueller and Glenn Warren. Phyllis and her husband Glenn met in 1981, and are passionate animal rights activists who believe that animals should have the same rights as humans. The couple is even in the top ten percent of worldwide donors for the Citizens Commission on Human Rights. 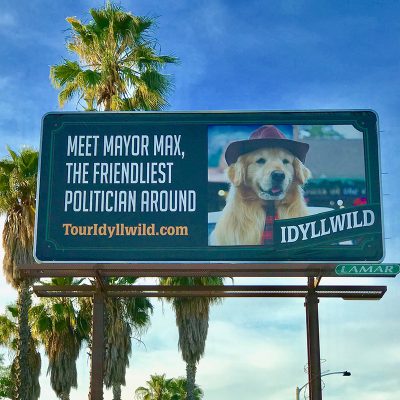 Phyllis and Glenn moved to Idyllwild in 2011 with the original Mayor Max, I. In addition to running the Office of Mayor Max, the two are self-employed and run a full-service marketing agency called Mueller Worldwide that helps companies make sales appointments.

In 2012, Idyllwild held its first-ever mayoral election, sponsored by Idyllwild Animal Rescue Friends (ARF).  Any local resident was permitted to nominate his or her dog or cat. Phyllis and Glenn nominated their 12-year-old golden retriever Max.

“When I first heard about the election, it touched my heart. I thought it was such an honor to be considered for the Mayor of Idyllwild in a non-political way,” said Phyllis. 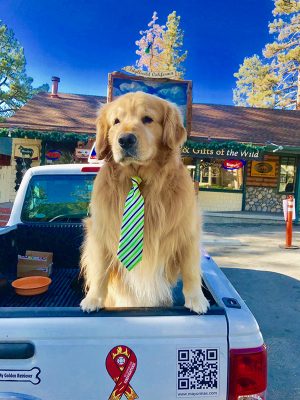 The election was held over three days at the Idyllwild post office, with buckets for each animal candidate for voters to drop money into, as a fundraiser for ARF. The public was encouraged to vote for as many candidates as they wanted, and were able to contribute funds more than once.

Fourteen dogs and two cats were nominated and ran for office. Constituents could cast their votes via $1 donations each, and all $31,000 of the proceeds benefited ARF. Max won by a landslide, with a full two-thirds of the votes totaling to $21,133.

Max (Maximus Mighty-Dog Mueller) was voted into office during the election held on June 11, 12, and 13, 2012 in Idyllwild, and was inaugurated to a one-year term on July 1, 2012. Max’s popularity moved the people of Idyllwild to appeal to ARF for his continuation in office beyond his one-year term. 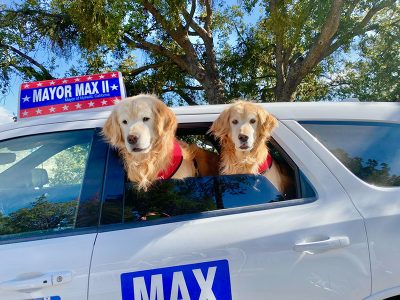 “When Mayor Max, I died, the community was in overwhelming grief and without me even contacting anyone, Channel 7 news did a segment that night, saying ‘the tears are flowing in Idyllwild tonight.’ Everyone was devastated and I wanted to create more happiness,” shared Phyllis. 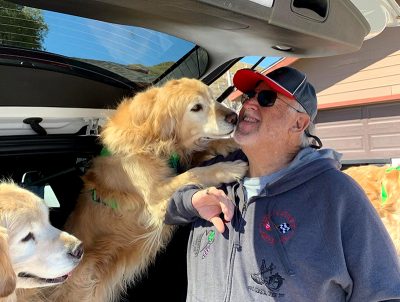 The search for Mayor Max, II began, and after a four-month period of time, Idyllwild met the new Mayor Max and his two deputy mayors, Deputy Mayor Mikey, and Deputy Mayor Mitzi, and celebrated with a welcome party.

Mayor Max, II was found at EveningStar Kennels in Aguanga, CA, and while Mitzi and Mikey were adopted at Gangway Kennel in Rootstown, Ohio.  The three dogs shared a common ancestor with the original Mayor Max. Mikey and Mitzi are siblings from the same litter, and Max was a cousin of theirs. Mayor Max, II shares many similar attributes to Mayor Max, I. 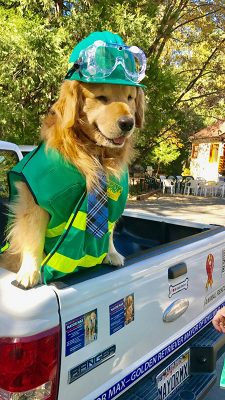 “Mayor Max had no idea who was republican or democrat. He’s loved on both sides of any issue. He’s well-loved, not only by the Idyllwild community, but around the world,” stated Phyllis.

Since COVID restrictions lifted, Mayor Max, II would visit schools, hospitals and nursing homes, and do charity fundraising for non-political charities. Just like his predecessor, Mayor Max, II was a central figure in Idyllwild fully invested in the lives of his townspeople as part of his mayoral duties. He would do wellness checks on those who were feeling sick, or help families in crisis through fundraisers organized by his office.

Deputy Mayors Mitzi and Mikey will act as the new co-mayors of Idyllwild on a temporary interim basis while Phyllis begins the search for Mayor Max, III. The process has already begun and Phyllis hopes to have identified the new mayor between the next 3 to 12 months, where he will then be brought to Idyllwild to continue the mayor’s work. 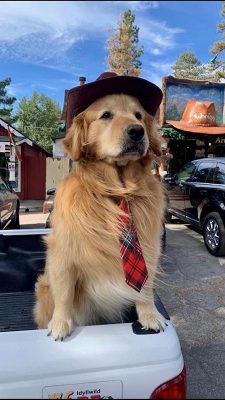 Phyllis has trouble recalling a favorite memory with Mayor Max, II, as every day together was so special. It was evident, however, that many people loved him. From tree lighting ceremonies in December to Fourth of July events, people would smile as they saw the mayor and his spares dressed for the occasion posed in the bed of their office truck. Hospital visits also made an impression on Phyllis, as she saw firsthand how Mayor Max, II made others’ last moments ones of peace and happiness.

“When you see that a dog can create immediate joy for a person who is dying, you know that it’s a special being. Mayor Max, II comforted others and tried to bring happiness in the worst of situations,” recalled Phyllis.

As part of the Office of Mayor Max, one of Phyllis’ roles included scheduling visits with people who recently had a pet pass away. After the death of Mayor Max, II, Phyllis received many calls from people, saying that they felt as though their own dog had died because of how much they loved Max.

“Whenever we were out in public and a child would say, ‘I wish Max was my dog,’ I would tell them, ‘Mayor Max is not just my dog, but he’s also your dog. And he promises to love you for the rest of his life and he feels that you are perfect just the way that you are,’” shared Phyllis.

Phyllis plans to continue the Mayor Max tradition as a means of creating a movement of love. The Office of Mayor Max’s charter is to make the world a better place with unconditional love and doing as many good deeds as possible. Three years ago, Mayor Max’s POET (Peace on Earth Team) was created to encourage others to take a stand against hate, and will continue to do so.

“I had no idea how much of an impact Mayor Max had until after he died. I knew we had a hundred thousand followers online, and I knew that we created a lot of living angels, but now that he is gone, I realize that we have reached many more people than I ever imagined. Mayor Max wanted to create peace on earth in his lifetime, but now he can create peace on earth in his new lifetime,” stated Phyllis.

More information and updates regarding the search for Mayor Max, III, can be found at www.mayormax.com, or on the official social media pages—@mayormax1 on Instagram and Mayor Max Politician on Facebook.