The X-Men are back. Granted they never really left to begin with. This month, Marvel relaunched the main title and with all its spin-offs to follow in hopes of returning the books back to the powerhouse status that they were known for a number of decades as. 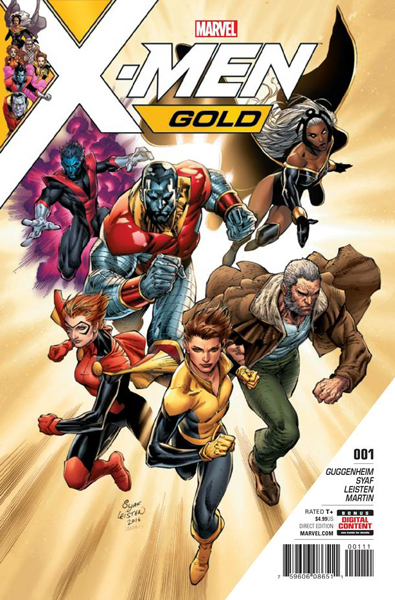 On April 5, 2017, the main title X-Men Gold hit the stands of local comic book stores with its first issue.  In the process, it established itself as the primary title, similar to what its predecessor Uncanny X-Men did for decades. Written by Marc Guggenheim, with art from Ardian Syaf, the title features a classic line up of characters, some of whom have also been given a new twist. Characters featured in this title include Kitty Pryde (otherwise known as Shadowcat) leading the team, with Storm, Nightcrawler, Colossus along with Old Man Logan (also known as, Wolverine) and Prestige, who fans will recognize as Rachel Grey (the daughter of Cyclops and Jean Grey from another reality.)

So what drove Guggenheim to use the characters effectionally known as the “new team,” which debuted in 1975’s Giant-Size X-Men # 1. In an interview published in Marvel’s Resurrxion Free Previews Spotlight, which can be found for free at any local comic book shop, Guggenheim said, “Well, what drew me to the book was the fact that it’s the X-Men, my favorite super-hero team ever. As for the lineup, Marvel asked me who I wanted on the team. I ended up getting exactly the group I wanted.”

Now to understand the scope of how popular the X-Men are, and how they got there, we need to go back to 1975 when Marvel gave the title one last shot before cancelling it. The title created by writer Stan Lee and artist Jack Kirby had been running reprints of older stories beginning in X-Men # 67, which was released in April of 1970 and kept reprinting old stories up until 1975’s Giant-Size X-Men # 1. That book saw the debut of characters, Storm, Colossus, Nightcrawler, Thunderbird, joining already established characters, Sunfire and Banshee, and also marked the second official appearance of Wolverine, who first appeared in Incredible Hulk #’s 180 & 181.  Following this book writers, Chris Claremont, Len Wein and artist Dave Cockrum went back to the main X-Men title, which had reached issue # 94. For the beginning, they had the words, “The All New, The All Different,” added to the title in a re-branding, which ended up eventually becoming “Uncanny X-Men.”

From issue 94 to issue 279, writer Chris Claremont and a number of now highly revered artist took the X-Men to the top of the sales charts for Marvel. They were responsible for crafting a number of storylines like the Phoenix Saga, Days of Future Past, God Loves, Man Kills, the Mutant Massacre, the Fall of the Mutants, Inferno, Muir Island Saga and lastly 1991’s Mutant Genesis. That not only saw the debut of a second comic titled just “X-Men,” it also saw the casts of the books filed into two new groups, the “Gold team”, which was the case for the Uncanny title and “Blue team” in the new title.  But despite this new spin on the format for the X-Men, it also signaled Claremont’s departure, as he left X-Men after issue 3.

After Claremont’s exit, the line went through a number of great writers including, but not limited to, Scott Lobdell, Fabian Nicieza, Joe Kelly, Grant Morrison, Joss Whedon and Mike Carey. They all kept the books exciting and entertaining. By this time it wasn’t just Uncanny X-Men and X-Men fans could find on the shelves, as there were other team books like The New Mutants, which ended up becoming X-Force, X-Factor, Excalibur and solo titles Wolverine, Cable and X-Man.

At the same time Marvel, was cashing in on the popularity of not just the X-Men, but also books from the Spider-Man line as well. And released a slew of merchandise that most fans associate the 1990s with. This included everything from toys and cartoons to clothing and school supplies.

In the late 1990s, Marvel worked out a deal which saw the movie licensing rights for the X-Men go to Fox, and in the summer of 2000 the studio released the first X-Men film directed by Bryan Singer. This of course got the ball rolling on a film franchise for Spider-Man due to a partnership with Sony. Then in 2008 Marvel began releasing films on its own starting with Iron Man starring Robert Downey Jr., which in turn created a new buzz about characters that weren’t seen in the X-titles. This obviously compelled the publisher to use that new interest to re-establish its other titles, in hopes of attracting movie goers to buy comics. However, some fans felt like the publisher stop caring as much about the X-titles when compared to books from the Avengers line. And in a way it’s true largely because Marvel’s CEO Isaac Perlmutter felt that because of the deal with Fox, the X-titles, as well as the Fantastic Four, should take a back seat to properties they own 100%, and can financially benefit from.

This was more than obvious when the company would do cross over events like 2015’s Secret Wars and 2016’s Civil War II. Granted, the publisher didn’t completely “black ball” the characters from the X-titles, but they weren’t spotlighted in those books…and if they were, their appearances were limited.  Following those two events, Marvel went and relaunched their books with characters fans knew from both theirs, Fox’s and Sony’s films.  This of course got fans excited, as fan-favorite characters returned with all new first issues, a practice that’s not unusual, but of late has started to annoy some fans. This translated into a fourth volume of Uncanny X-Men, written by Cullen Bunn and featured the art of both Greg Land and Ken Lashley. The book X-Men was re-branded as Extraordinary X-Men; written by Jeff Lemire and featured art from Humberto Ramos and Victor Ibanez, and Old Man Logan which replaced Wolverine, also written by Lemire, featured art from Andrea Sorrentino.

This new activity allowed the publisher to work its way to a cross over with another property it had been giving more time in the spotlight to the Inhumans. The IVX crossover lasted for 7 issues, and following its conclusion, left some fans upset, which is not uncommon for those overly committed fans.  Once the dust cleared, Marvel figured it’s time to not only keep its non-x-titles where they are, but see if the X-Men can reclaim the top of the sales charts they controlled for a large part of their history.

So the company unveiled “Resurrxion,” which not only saw the premier of X-Men Gold from Guggenheim and Syaf, featuring the “Classic” lineup, but will also see Cullen Bunn’s new book, X-Men Blue which stars the younger, time displaced versions of Cyclops, Jean Grey (AKA Marvel Girl) Beast, Angel and Iceman; which features art from Jorge Molina. Also returning to the shelves of local comics shop is Generation X written by Christina Strain and artist Amilcar Pinna, and Weapon-X written by Greg Pak with art from Greg Land.

However, let’s not forget about the solo X-titles, as Old Man Logan will be now be under the new creative team of Ed Brisson and Mike Deodato Jr. Also making a comeback is fan favorite, Cable, from James Robinson and Carlos Pacheco. Other titles making their way to comic shops include Iceman written by Sina Grace, with art from Alessandro Vitti, and Jean Grey written by Dennis Hopeless and featuring art from Victor Ibanez.  With the relaunch officially underway, and all these titles marked to hit shelves in the near future, it’s now up to fans to decide if the X-Men will once again be known as a powerhouse brand.