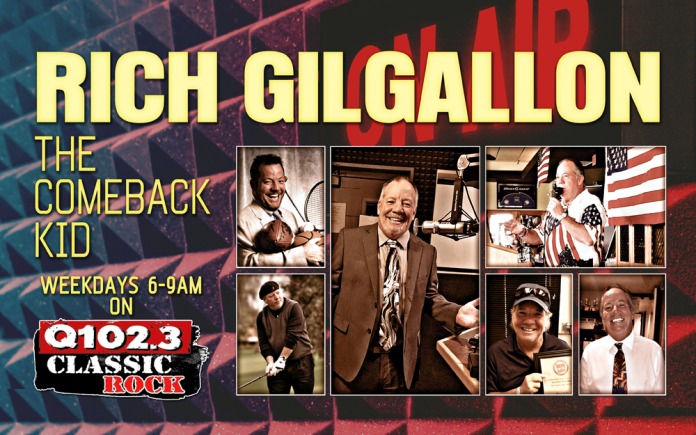 Speaking from the heart is something that very few have the courage to do, but Rich Gilgallon has made a career out of it spanning decades on the radio. Not only has he created a lasting legacy using his voice, but he has done so while overcoming his own unthinkable obstacles: surviving four heart attacks.

Gilgallon has extensive experience in radio, both as a sports talk show host and as a conservative talk show host. At the start of his career, he worked on the very popular Jim London and Mary Ball morning show Friday and Monday mornings, providing a preview and a wrap-up of the weekend sports action. Initially hired for the Redskin Report, the segments were so popular the  station decided to run them all year long.

While working at WMZQ in Washington D.C., he took on the moniker “Da Coach” and represented the station at many charity functions, including hosting the Arthritis Telethon on TV. Because of the popularity of the sports reports, Da Coach made many remote and public appearances and did personal endorsement sports as a very popular commercial voiceover commodity for the station.

Gilgallon was then hired by WTEM to work with Kevin Kiley as the afternoon team on a sports radio start-up. The show was awarded Best Afternoon Drive Show in Washington D.C. While doing the two-man show Monday through Friday, Gilgallon also hosted a solo Saturday morning show called The Coach’s Soapbox. He also started a golf show called the Schwaackin Show and had one of the first fantasy football radio shows. He hosted the Quarterback Club’s Timmie awards and the coach’s Schwaackin Classic Golf Tournament for the Boys and Girls Club.

While on the radio in D.C., Gilgallon was also on several television shows, including the Redskin Magazine Show with Tony McGee, Doc Walker, and Monte Coleman, among others. He was brought on to do the opening segment of Redskins After Hours, for which Gilgallon was nominated for an Emmy as the best TV Talent in Washington D.C.

Gilgallon came to the desert after taking over a start-up Sports Station morning show from 6 a.m. to 10 a.m. in the 90s. He also hosted the very popular radio talk show, Da Coach’s Soapbox. Because of the fact that golf is a driving economic force in the Coachella Valley, golf was heavily featured. Gilgallon was awarded the PGA Desert Chapter Media Person of the Year award 11 times and also awarded the Southern California PGA Media Person of the Year award and Best Of The Valley Radio Talent.

Having done sports talk radio for many years, Gilgallon requested doing a show on Conservative Talk, The Rich Gilgallon Show. It was very popular in the Coachella Valley with many remote broadcasts and personal appearances.

Gilgallon’s first heart attack occurred when he was 49 years-old on a golf course at PGA West in 2003. He was experiencing pain that he at first mistook for a chest cold or gas, but it ended up being much more serious. He drove himself mid-heart attack to Eisenhower Medical Center, where he was treated with one stent.

Having had the first heart attack, Gilgallon knew what was happening when the second one occurred five years later. After feeling the familiar pain, he called 911and was taken to the hospital for treatment, receiving six stents.

Unbelievably, Gilgallon experienced his third heart attack in November of that same year, which turned out to be an arterial blockage. His last heart attack was in December of 2018. It required a coronary artery bypass graft (CABG) four ways. Gilgallon was in the hospital for 32 days with kidney issues. However, he looks back on that time as the greatest blessing he has received in his life—bringing him closer to his faith and putting forth a new perspective.

“I had 32 nights of close contact with God. There were a lot of conversations and it put me back on the road of where I needed to be. I struggled that year because of resigning from my job, and there was so much pressure to make a living. I was trying to make 20 gallons of soup in a 10 gallon pot for too long a time,” said Gilgallon.

Gilgallon is eternally grateful to the surgical and nursing staff at Desert Regional Medical Center, who treated him during his last three heart attacks. He was undergoing kidney dialysis at the time of his fourth heart attack, and the staff was sure he going to be on dialysis for the rest of his live. Gilgallon believes it is a miracle that his kidneys rebounded.

“I have learned that every single day is important. I live my life like it’s my last day because it could well be. The one thing I don’t fear is death. I have a firm belief in where I’m going when it’s over. I’m absolutely 100 percent positive, so I’m just trying to live each day one at a time and I’m happy when I wake up in the morning,” stated Gilgallon.

There are so many favorite memories that Gilgallon recounts in his career, such as getting to meet various notable people, including Rock and Roll Hall of Famers just this past week—the likes of Felix Cavaliere from The Young Rascals and Danny Seraphine, the drummer of the band Chicago. Gilgallon has also loved interacting with the Coachella Valley community, hosting Saturday Night and College football at the Agua Caliente Casino in Cathedral City. He also hosts Sunday and Monday night football at the Agua Caliente Casino in Rancho Mirage.

“I love the Valley. The people have treated me so beautifully and have helped me get through hard times. There was a time when I was about to leave town, but at the last moment, the deal fell through. And I was thankful to God it did because I really don’t want to go anywhere. I love it here,” said Gilgallon.

Currently working at Q102.3 Classic Rock, Gilgallon is focused on bringing the show to more people every week as he plays music he loved listening to while growing up. He started working for Marker Broadcasting last year, and he has always wanted to work for owner Todd Marker. The locally owned aspect of Marker Broadcasting was appealing to Gilgallon and he is grateful for the opportunity.

“I want to bring growth to the show because I know it will help grow the community. For three hours every morning (6 a.m. to 9 a.m.), I ask people to put their differences aside and forget about the news for a bit. Just enjoy the music and rock ’n’ roll at full volume,” stated Gilgallon.

Listen to “Da Coach” from 6 a.m. to 9 a.m. every Monday through Friday on 102.3 and catch his Facebook live videos for more content.