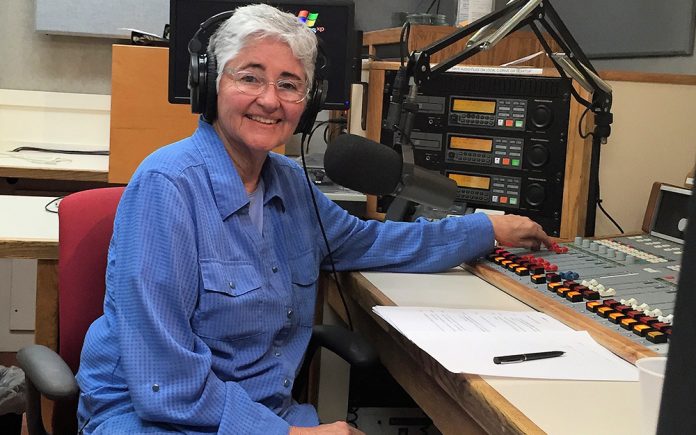 There’s a saying that people enter our lives for a reason, a season or a lifetime.  They serve an immediate need, stay for a period of time and then move on or they become ingrained in our lives over the years and remain an integral part of our world.  Rita Gonzales, has always been a lifetime friend in the Los Angeles Theatre and LGBTQ communities, and now she’s become a full-time resident of Palm Springs.   With her sense of humor and never one to shy away from a challenge, Rita decided to move to Palm Springs… during the summer… and in the middle of a global Pandemic.

She began her involvement in Gay and Lesbian Latinos Unidos, (GLLU) the oldest LGBT Latino organization in Southern California, where she served as President of this organization in 1986.  She has since served on several boards of directors, including Connexxus, an organization for women, the Los Angeles Stonewall Democratic Club, as the co-chair of the people of color committee, the One National Gay and Lesbian Archives, where she was on the board of directors.  She was also on the advisory board for Women On A Roll, an organization for women seeking alternative recreational activities.  She now chairs the board of directors for Bienestar, a Latino health education agency that she has been affiliated with since its inception in 1989.

Rita began her affiliation with radio as a host for “Radio GLLU” in 1986, where she was co-host and editor for 11 years. In 1995, she became co-host of the newly formatted show IMRU, one of the longest running gay and lesbian radio programs in Southern California. Since that time, she has worked as a segment producer, technical engineer, board operator and editor and the executive producer of IMRU.

She is currently co-producing a new LGBT radio webcast program on KPFK called “The Out Agenda.” Through interviews, debates, and special feature stories, this show examines today’s issues from the LGBT perspective.  Each week, listeners are invited to be active participants in the show with call ins, by posting comments on Facebook, or with emails and tweets.  The OUT Agenda is truly the voice of the LBGT community in action.

I met Rita, when she worked as the Sound Engineer on the production of my first play over twenty years ago.  And what started as a friend for a reason soon became a friend for a season and eventually a life time as she went on to work on just about every play I wrote, directed or

produced.  When Songwriter Michele Weiss, and I founded The Los Angeles Women’s Theatre Project in 2007, Rita Gonzales, became one of the first board members, bringing her lifetime of experience and skills to the organization.

“Another one of my passions is live theatre.” Rita states, “I love working behind the stage.  I fall in love with every play that I have done. This is where I met Dee Jae Cox, I was the sound engineer on several of her productions.  I loved working with the LA Women’s Theatre Project.  I look forward to working with this organization here in Palm Springs and other theatre companies.  I swept a mean floor and I am a good ticket taker.”

Now a new permanent resident of Palm Springs, she continues to record and broadcast her show, “The Out Agenda,” on KPFK and is reaching out to the desert theatre and LGBTQ Communities, planning to get more involved as social distancing eases up.

Rita Gonzales has been an activist all of her life and brings to the desert community a friend for all reasons, seasons and a lifetime.  Her show can be heard on www.kpfk.org/on-air/the-out-agenda/